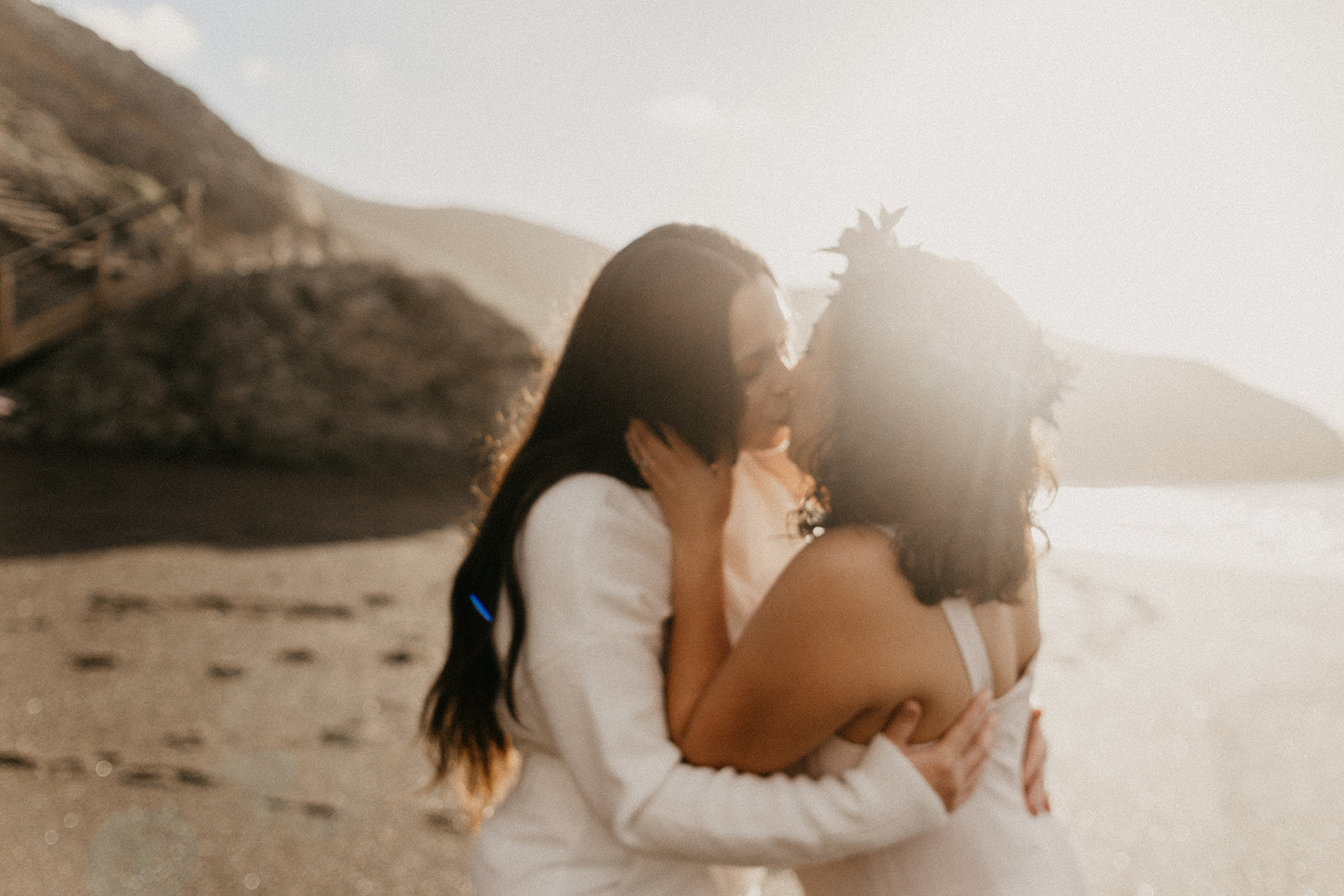 Addy and Brittani did want a 25 guest wedding, but a few factors meant that they opted for a sunrise elopement along the beach with just six people there to witness.

How did you two meet?

We’ve been together four years and met in Hawaii through a mutual friend. Addy just moved to the island and worked with my best friend, who I’d go to visit at work almost every day. Soon, I wasn’t just going to visit him, but I would visit her every chance I could. We started to hang out and explore the island on her days off, and we’ve together ever since!

What are some of your favorite memories together?

B: It’s hard to think of just one! But one night in Hawaii, we went to a concert and got super wasted- it was great. But anyway, that was one of the few times where I’ve seen Addy drunk. She was so drunk, in fact, that she had this brilliant idea to go jump in the pool. Fully clothed. So we did, and it was super awesome.

A: Mine is not a specific occurrence per se, but when we first moved here, I took Brittani bar-hopping at the Castro in San Fransico. I loved her reaction to being surrounded by the LGBTQIA+ community because it was not something she had experienced on the island.

Why did you decide to elope?

We initially thought of doing something with about twenty-five people, but it was going to be too difficult to plan with everyone’s various schedules when we thought about it more. Not to mention keeping everyone safe during the pandemic. We decided to scratch everything and kept it super minimal with just six others, with all of that in mind.

How did you let your loved ones know that you eloped?

A: I’m still dealing with the repercussions of not having my younger sister there, but she is happy for us. I haven’t told anyone else yet.. they won’t take it well that they weren’t invited, but they’ll be happy for us, eventually!

B: It’s been a few weeks, so I’m just starting to tell my friends and immediate family. Everyone has been shocked. Some of them screamed, but 90% are mostly happy.

Did the elopement day go exactly like you had thought it would?

It was beautiful but chaotic trying to elope at sunrise. Running on very little sleep, we got up super early and got ourselves ready. As we were just about half a mile away from the beach parking lot, we found out that there was a locked gate preventing us from getting there. After the gate was opened, we started the intense hike down to the beach. It was just so beautiful and quiet when we all made it there because no one else was there. Our officiant, Jenn (Addy’s best friend), lead a beautiful ceremony. We exchanged our vows, then our rings, and celebrated with champagne for breakfast.

Photography by Liv With The Lens