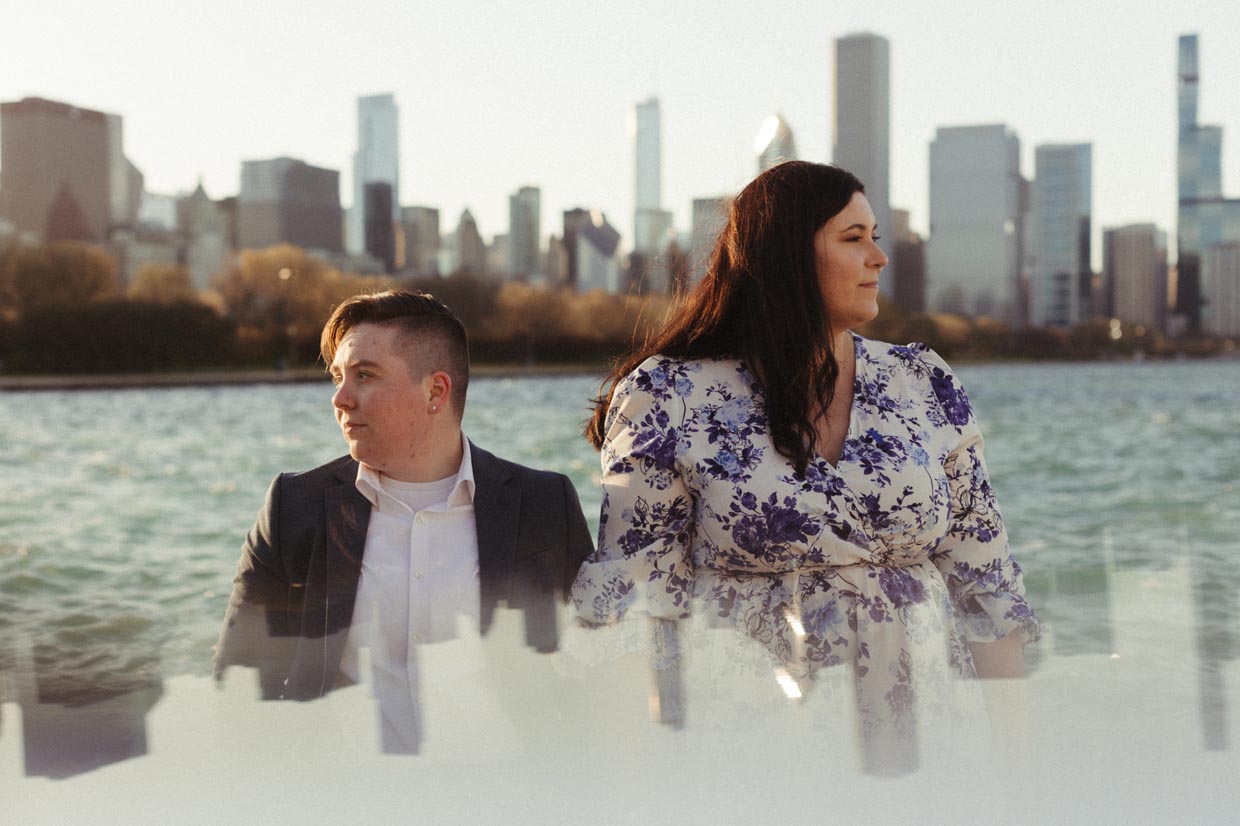 Jessica grew up in a homophobic family, and it’s been a hard journey – but, it makes Adrianne and Jessica’s engagement all that more special.

We have been together for a little over four years! It’s incredible to think about how we have grown together during that time. We initially “met” through the dating app HER and after a few days of messaging back and forth, I asked Adrianne to meet for coffee. Because we lived about an hour and a half away from each other at that time, we each drove 45 minutes to meet up at a Starbucks. On that date, we talked for hours.

We met for several dates after that and officially started dating on March 11, 2018. Adrianne was the President of an LGBTQIA+ club at a local college at the time, and the club was hosting a prom. The entire night she kept avoiding me because I thought she didn’t like me.

At the end of the night, there was a drag show. As we were watching, Adrianne whispered that she had to use the restroom and would be right back. The next performance ended, and a drag name was announced. Adrianne came out from behind the curtain dancing to “Mine” by Bazzi, a song I showed her prior. At the song’s end, Adrianne slid across the dance floor, someone handed her flowers, and then she asked me, “will you be my girlfriend?” all while subconsciously taking the dollar out of my hand that I was about to give her during her performance. Four years later (two being long distance), we have adopted two cats and will live and work in the same city; finally, our family is together!

We had not discussed it, but I wanted to do something special for Jessica. So I hired McKenzie Bigliazzi to capture the moment in one of our favorite cities during a weekend getaway. I knew of and really enjoyed this spot behind Shedd Aquarium, so that is where McKenzie and I planned for the proposal to take place. I was a student of McKenzie’s at ISU, so we played it off like she was in town for the weekend and needed a couple to do a photoshoot.

With the Chicago skyline in the background and Lake Michigan next to us, Jessica and I had the most fantastic moment we will remember forever. After the proposal, I asked Jessica if she knew, and she said that she felt it was going to happen that weekend but was surprised that it happened during the photo shoot and not the rooftop bar we went to for brunch.

The engagement ring was bought from James Allen. It’s really cheesy, but I chose James Allen because it goes with our initials, Jessica and Adrianne. Jessica has sent me pictures of what she wanted in a ring over the years, so I based the design on that. It is a gold ring with an oval diamond featuring smaller diamonds that twist down the side. She loves it, and it reminds her of her mother’s ring, which means a lot to her.

For Adrianne, she knew from a young age that she wanted to marry a woman, but it wasn’t so clear to me. I grew up in a very religious family, and being LGBTQ was considered an abomination. As a result, it wasn’t until college that I was really able to explore my sexuality and who I may want to spend the rest of my life with. Throughout our four-year relationship, we have experienced many challenges due to my family not being accepted, but it has only strengthened our bond to one another.

Being engaged really means committing to each other wholeheartedly. It’s us against the world, and it feels much different than when we were just dating. It’s a lifelong promise to be each other’s best friend, protector, partner, and biggest supporter. We cannot wait to continue creating a beautiful life together as wives.

So far, we have a few solid plans for our wedding. We want to elope in the Rocky Mountains, with McKenzie as our elopement photographer, and about a week later, enjoy a small wedding and reception with our family and friends. After that, we want to honeymoon in Greece and Paris! We are both leaning into more classic, earthy, and romantic themes, as we want our wedding to be simple but elegant. As for what we hope for our elopement/wedding to be, we want our elopement to be vowing our love to each other privately and intimately, and we want our wedding/reception to be celebrating our love with those who mean the most to us.

Having grown up in a homophobic family and Adrianne having seen how much it has affected me, we empathize with similar couples who have experienced trauma or backlash from sharing their love with family and friends. You are not alone; sometimes, the most beautiful family comes from those you choose to surround yourself with.