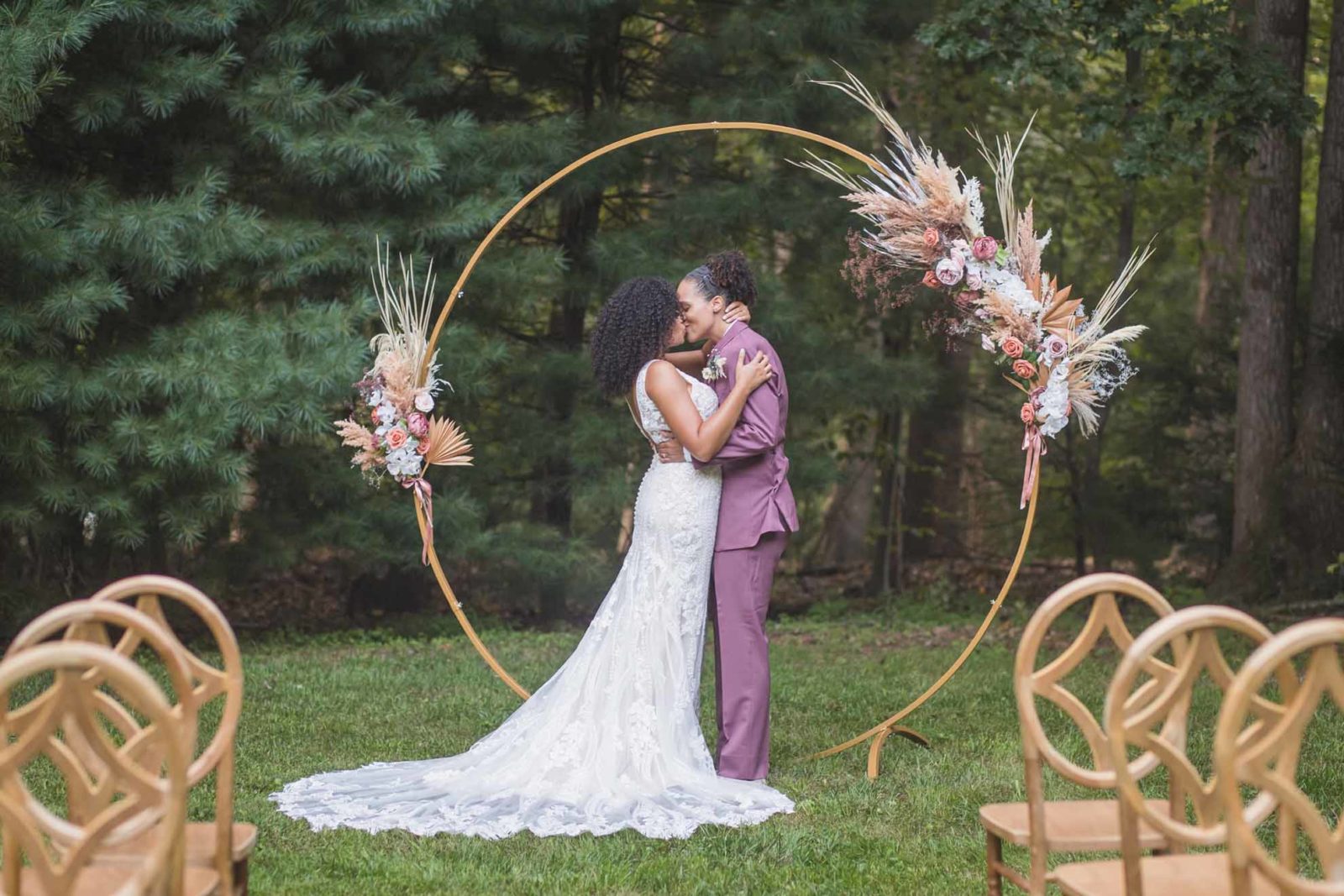 Pastel Boho Backyard Micro Wedding Styled Shoot in these times of uncertainty due to a global pandemic, many couples have decided to postpone their weddings to 2021. In hopes that the world opens back up and they can have their big wedding. On the other hand, some couples have decided that #loveisnotcanceled and have changed their wedding plans by downsizing their guest list and having more intimate ceremonies. You can still have the wedding of your dreams, even if it’s in someone’s backyard. For this styled shoot, we rented a backyard off of Peerspace and created a small intimate #microwedding. I always suggest working with a wedding planner to make sure your ideal wedding comes to life. Wedding planners have many vendor connections and can create a beautiful space for you and your guest.

We met in the “classic” way, some would say – through friends! But with a bit of a twist. Alayna had just come off of a self-imposed “hiatus” from all things romance and had never dated women before. Taryn had just come out of a complicated year+ long relationship. Alayna’s best friend, Alex, from college, is family friends with one of Taryn’s best friends, Ashley, from high school, and one night they all went out for Ashley’s birthday.

As soon as Alayna spotted Taryn through the crowd, it was electric. She had never felt that way just by looking at someone. Ever. Gender be damned. Little did she know, Taryn felt the same. Being her at times very awkward self, Alayna had no idea how to act, so she just avoided looking at Taryn for most of the night. Taryn had no idea it was because Alayna was totally enamored with her and thought she was just a standoffish person. But the next morning, we connected over brunch and ended up spending the next two days together on and off, between Sunday Funday, dinner, and watching the NCAA championship. Our whirlwind romance blossomed quite quickly from there, and we’ve been inseparable ever since!

Through every up and down, we’ve chosen each other and our life-changing love. The proposal came nearly four years later on an epic and romantic trip to Thailand. We had discussed engagement for some time, but Alayna had no idea when it would happen. Taryn did an excellent job throwing Alayna off any scent, as she is definitely the romantic one – always planning surprises and fun activities for us. Alayna never knew when to expect an engagement because she was continuously swept off her feet.

We had a beautiful suite with a private pool that Taryn said would be set up with a floating breakfast on the second morning of our trip. We left the room for the resort staff to “set up the floating breakfast,” and Taryn acted a bit strange while we walked the resort grounds. Alayna didn’t think anything of it, as she generally goes with the flow. When we finally returned to the room, it was decorated entirely with balloons. Alayna, completely oblivious, asked, “Wow, is this part of the floating breakfast?” It was just after that statement when she realized the balloons across the opposite wall spelled out “Will You Marry Me.” Taryn got down on one knee. She said some things neither of us remembers because we kind of blacked out from shock and emotion, but Alayna definitely said yes!

Taryn then revealed the rest of the engagement day plans. A sunset beach engagement photoshoot and a celebratory dinner at a local steakhouse where we had one of the best dinners EVER. We spent the rest of our trip in pure bliss. Soaking up the Thai sun and enjoying a once in a lifetime experience.

Though we returned to a world in quarantine, we are blessed with our health and safety; and faith that our special day will occur amidst a world transformed.

Betsy & Lora – A Sunrise Hike & Elopement in the Dolomites

An Intimate, Wild Wedding on the East Coast