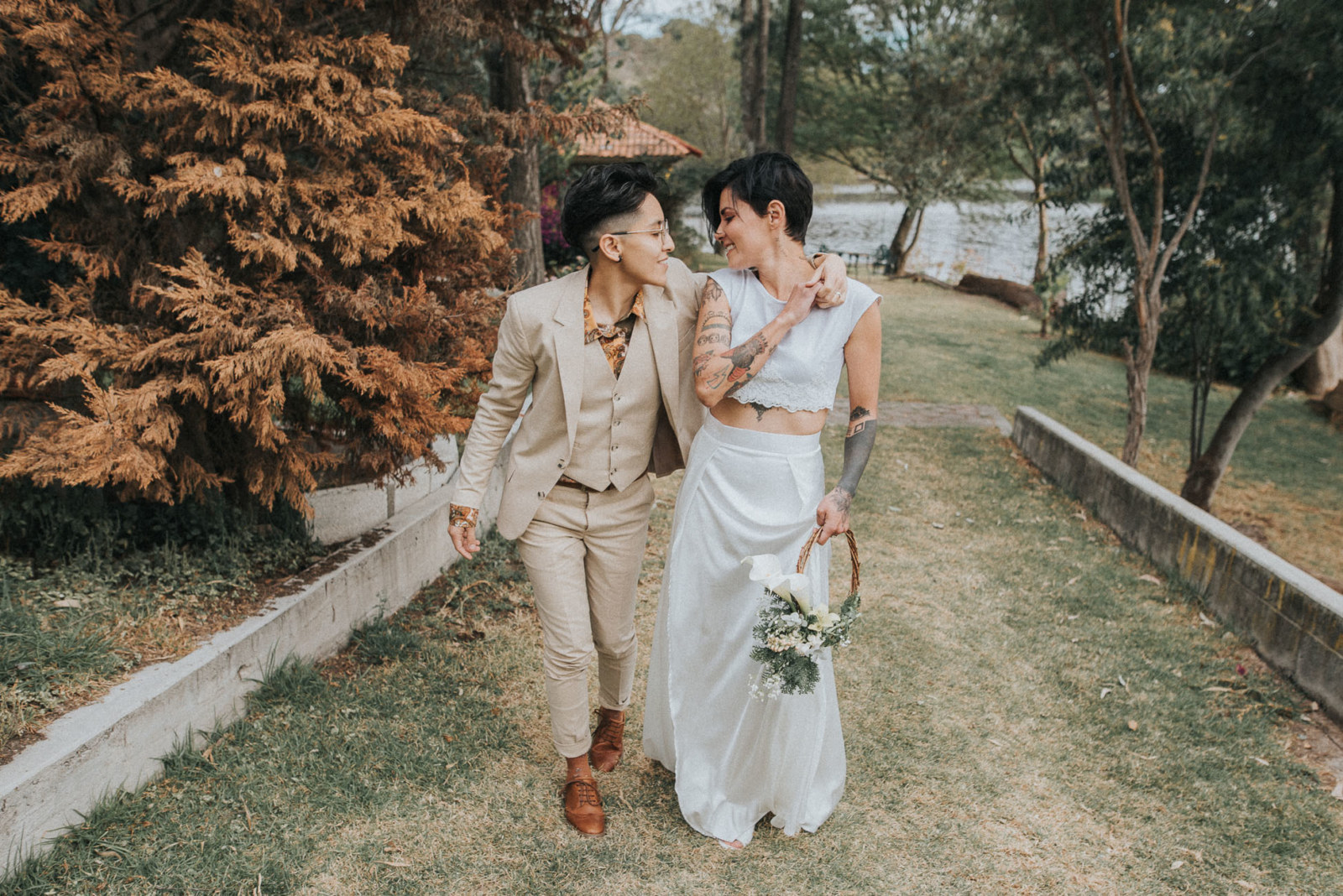 Surrounded by a handful of loved ones and their favorite animals, Alejandra and Erika married in an intimate ceremony in their home town of Puebla, Mexico.

Erika and Alejandra met on Tinder, and after many hours of chatting and exchanging photos, the women knew that that truly wanted nothing more than to meet each other. Erika recalls how it’s funny that your life can change in just a second. Every time they spoke, she got that ‘butterflies in the tummy’ feeling, and knew that something magical was happening.

Erika needed to travel interstate to meet Alejandra, but it was Christmas time and all the trains were full of people traveling home to their relatives. She was a little disheartened but persevered, and two days later, she made her way to Puebla. She said she arrived feeling ‘happy as hell.’

Erika’s ride left her in front of a 7 Eleven and she waited for Alejandra to arrive. She recalls her heart was about to explode. Then, Alejandra appeared on the sidewalk in front of her and she saw the smile on her face. She then realized that she wanted to see that smile every day, for the rest of her life. They spent the day together and by the end, Erika knew she was in love. They kept in contact and not long after, Erika packed up her whole life… her daughter, her cat, and everything she could put inside the car, and moved in with Alejandra.

Then came the day she asked Alejandra to marry her with a Romeo and Juliet book. For their engagement, Erika gave Alejandra the book as a birthday present. She had secretly made a hole in its pages and put a ring inside. When Alejandra opened it, and saw the ring, she just grabbed it and put it on her finger. The engaged couple then celebrated with friends and some drinks!

Erika says that the change from a big city to a small one was challenging, and as every couple does, they had ups and downs. It wasn’t easy for her to fit in and live in a new town as the local people did. Even though it was hard, she never worried too much because she had her daughter, and she had Alejandra, and they were so happy.

The couple planned a low-key event with their closest friends and family. Dressed in a chic beige suit and a stunning two-piece set, the brides married in February of this year. They exchanged vows by a lake, with their five dogs, chickens, birds, close friends and Alejandra’s relatives. Although Erika’s family weren’t there, she had her daughter, which she says was more than enough for her.

The couple’s photographer Jorge Caballero then took a series of stunning shots of the newlyweds by the lake, and the photos certainly speak for themselves.

Erika says that although she was so nervous on her wedding day, there was absolutely no doubt that she had made the best decision of her life. She says that loving Alejandra is amazing, something she tells her every day!

Erika says that since her and Alejandra met, everything happened so fast, and that time doesn’t pass the same anymore. The newlyweds say they feel they live in another time… together! Erika found someone that accepts and loves both her and her daughter, and there’s nothing more perfect than that.

Ash & Sasha – Being the Non-Gestational Parent of Twins

Becka & Julianna – Coming Out to be Together