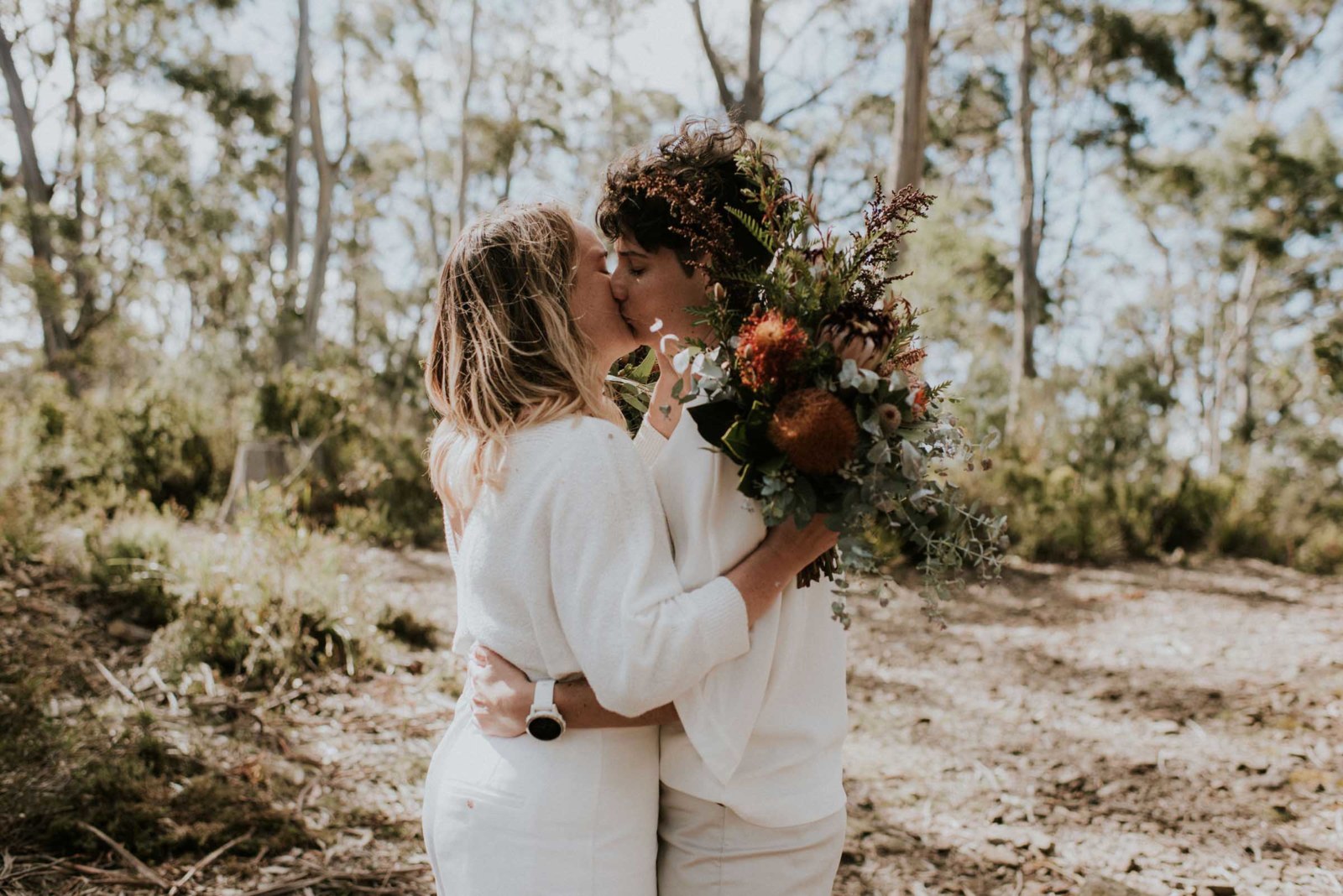 Words by Jai, one of Alisha’s bridesmaids.

I’ve known Alisha for over ten years. Friends through a lot of adventures, growth, and change. She and Mel met through mutual friends. I remember the way Alisha talked about her – how beautiful she was, her stunning smile, how they couldn’t stop talking – and then meeting Mel, seeing them together – so caring and tender.

It hasn’t changed since they met.

Boundless love, endless love, palpable love. I felt it all weekend in Spring Beach, Tasmania, where the two married in October 2019.

The night before, we’d been wowed by a stunning rainbow over the bay. As the photographer, Dan put it; it was like “natures way of saying ‘hell yes!'” And then, arriving for the ceremony at Three Thumbs Lookout, in true Tasmanian style, we were graced by the presence of a friendly echidna.

There were happy tears, sniffles, and smiles from guests as Alisha and Mel walked into a natural clearing, just off from the Lookout, to a heavenly cover of Truly, Madly, Deeply (Savage Garden) by Jack River, where they’d soon share their vows. The backdrop was Australian flora in all its glory – rustic gums and paperbark trees, greens, ochres, and browns. The two looked luminous, standing there in whites and creams.

Alisha and Mel’s celebrant, Kathleen, took guests down memory lane first – sharing how the two had met. First, spending six months long-distance, as Mel lived in Tasmania, Alisha, in Brisbane. But they constantly talked, each unable to shake the strong pull they had towards each other. Alisha even bought a one-way ticket to visit Mel in the early days, staying for a week, as they explored and fell in love with the place that Alisha would eventually propose in.

But first, Mel would move to Brisbane, and they’d set up life in a breezy, Queensland cottage. Decking it out with natural tones and native Australian flowers – which would carry through to their wedding theme. They often took trips back to Tasmania, exploring some of their mutual loves. Hiking nature trails and good food and wine.

And then on one trip, in a small-town called Penguin, on a hike, Alisha found the right moment to ask Mel to marry her. It fits then that the wedding would take place in the same part of the world.

Alisha and Mel’s handcrafted rings were sent around to each guest for a ring warming, where they asked each person to hold the rings and send them warm thoughts. Their mums then brought the rings forward, handing them over to their daughters. These moments filled the air with such a sweet sentiment.

Before making it official, on behalf of Alisha and Mel, Kathleen acknowledged LGBTQI+ elders and community, those who had paved the way for them to be where they stood now. This was another powerful moment, as we were reminded that a weight had truly been lifted. I felt everyone’s hearts so full and grateful.

“A marriage is between two people,” she said.

Wife and wife now, more tears of joy flowed. Because these two women were, and are, truly meant to be – their love so very clear for all to see. The kind that sounds corny, but in reality, only manifests as honest and inspirational.

We sprinkled leaf-etti on the newlyweds, and that feeling of love – among friends, family, and partners – only seemed to grow more boundless among us.

Caitlin & Karianne – A Glitter Dress and A Custom Suit

Sian & Tenille – A Year After Marriage