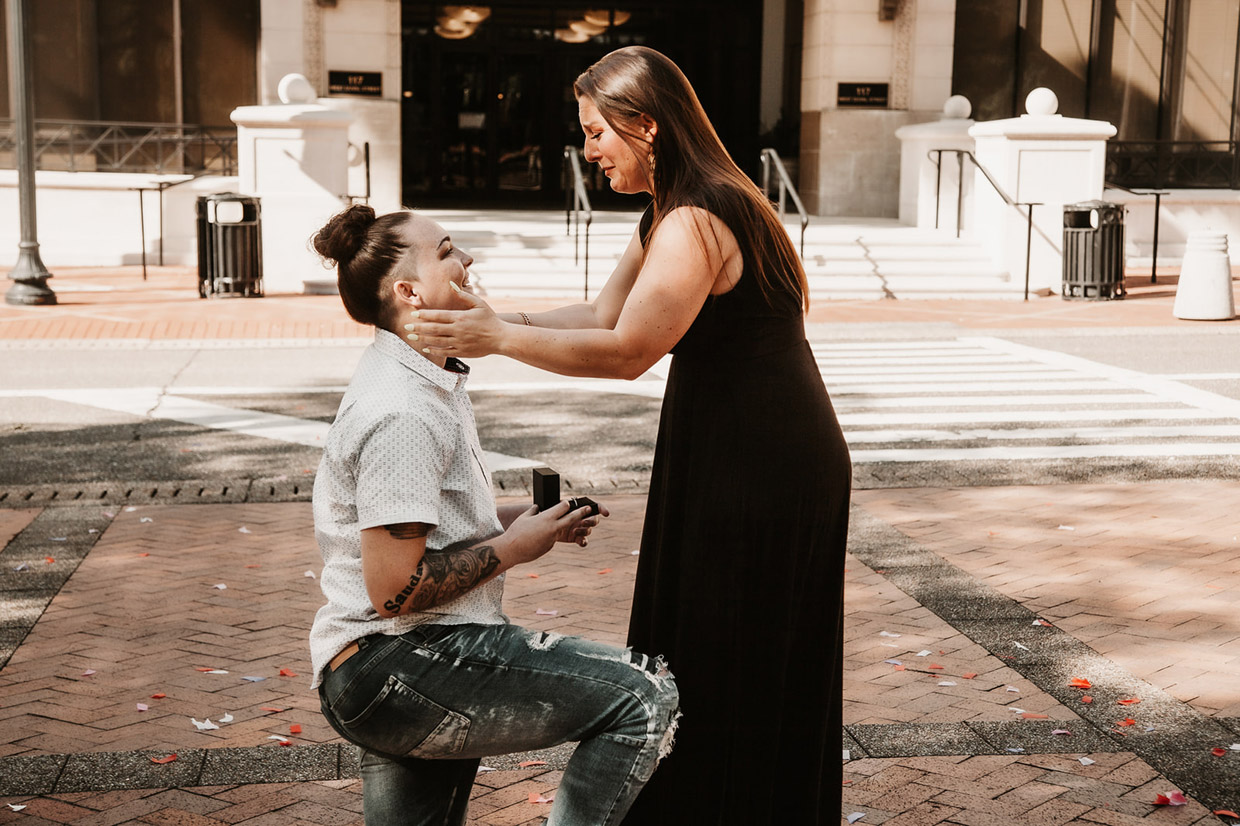 In downtown Jacksonville, Christina threw confetti into the air during a couples photoshoot, only to turn around and see Alissa down on one knee.

Tell us how your love story began…

We’ve been together for a year and a half.

Christina spotted Alissa working one evening while she was eating dinner with their son. She swore she would find a way to get to know her and nonchalantly informed one of Alissa’s co-workers in the bathroom that she “Thought Alissa was hot and dug her tattoos .” Christina snuck out that day without confronting Alissa or being seen. Don’t worry, she went back the next day with a friend, and as luck would have it, Alissa was their server that day! We credit and give thanks to some cute hashtags that Christina left on the bill. Alissa found a way to get Christina’s number from a mutual friend, and the rest is easy to depict.

Tell us about your proposal, and that sneaky confetti shot.

Christina found Jessica through a model call and arranged to have a family photo session done (including the puppercini, Stella!). Unfortunately, it rained on the original date planned, so she had to reschedule due to weather restrictions.

Apparently, Alissa went out of her way to contact Jessica without Christina even knowing they had any communication and told her that she would make a surprise proposal during the photos!

They came up with a cute proposal idea utilizing confetti, and Jessica went out of her way to personally cut the confetti and bring it to the shoot so that Alissa wasn’t caught or so that Christina wouldn’t know they spoke previously. Sneaky little buggers!

Unfortunately, the circumstance didn’t allow for us to bring the pup.

What led you to the destination of the proposal? Have you been there before?

Jessica had a fantastic idea to use downtown. Christina works downtown, so they came up with some creative ideas for photos and thought they would look new and refreshing. We both hadn’t seen photos taken downtown Jacksonville and wanted something different.

We both knew from day one that we didn’t want to be without each other. We are each other’s comfort zone and sense of home. So the engagement just adds the special finalization factor that it’s reality, and our dedication towards each other is permanent.

Cynthia & Danielle – An Elopement in Iceland