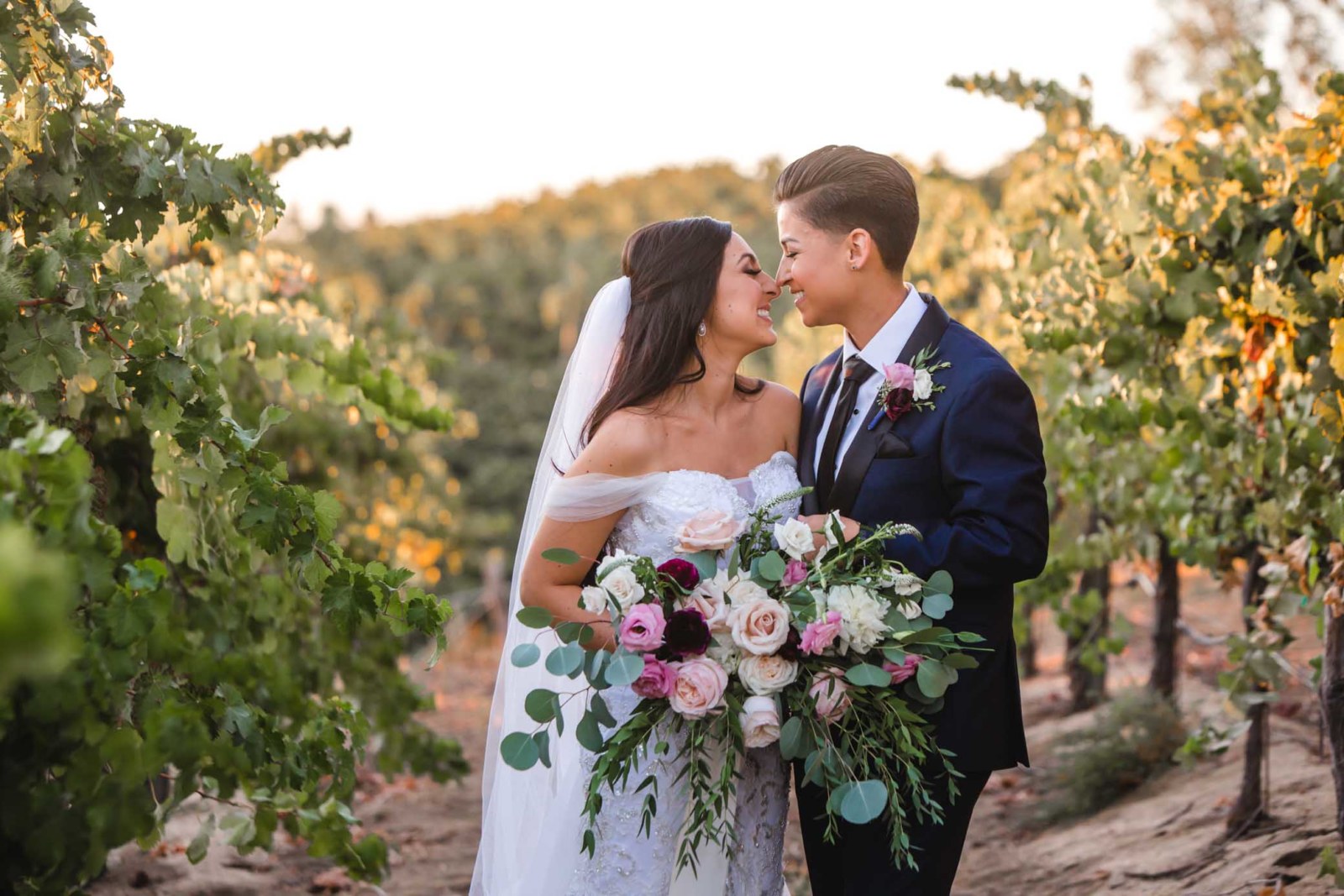 Alle and Kristi’s relationship was built on a strong foundation of friendship – eventually, they both realized that there was something ‘more’ between them.

Kristi and Alle’s story is anything but the “typical” love story. What started out as a beautiful friendship slowly turned into an even more beautiful relationship.

They met twelve years ago, on October 26, 2007. Alle had noticed Kristi right away. She particularly noticed her in her basketball sweatsuit with her perfectly straightened hair walking down the hallway past our history class. This memory is so vivid in Alle’s mind still to this day. Over time Alle found herself looking for her in the hallway or at lunchtime. There was a point where they were “enemies.” They ended up going out with the same boy, and they both were “the other woman.” After the junior high two-week relationships were over with that boy, Alle still had never spoken to Kristi.

Alle waited until their 8th-grade year to strike up the courage to go up to her and her best friend Melissa and tell Kristi that she liked her hair. She noticed she got a haircut, so it was the perfect way to start up a conversation! After that day, the two started talking and then in no time, they were inseparable! They became the best of friends and wanted to spend every waking moment together. Then soon after, they both realized that there was something else there.

After losing touch through most of high school, they reconnected in their senior year. They had hung out in different friend groups throughout the years. When their senior year homecoming skit came around, they both happened to participate, and it was then that they knew that they should never have left each other’s side. They started talking here and there, and once they graduated, they realized that they truly were meant to be together.

May 31, 2012, at The Happiest Place on Earth (Alle’s favorite place), Kristi took Alle to Snow White’s wishing well and asked her what she wished for. Nervously Alle said, “I don’t know, you go first!” She said, “my wish is that you would be my girlfriend.” Of course, she said yes.

Since the beginning, Kristi has always paid close attention to detail. She had their friend Skyelar whip out bracelets engraved with “To Infinity” and “Beyond.” It was the perfect day!

Flash forward seven years later. They live together, have two “fur” babies together, and are getting married!! Kristi and Alle always had something special. From the day they got together, they’ve talked about being together forever and now it’s finally happening.

A: We went to the Rise Festival in Las Vegas. It is a lantern festival that I have gone to many times and Kristi had never been. I bought Kristi tickets to go, and we had friends come with us. (It’s so funny because I basically planned my own proposal trip!) The plan was to be surrounded by thousands of lanterns through the sky like in “Tangled,” and Kristi would get down on one knee then. But twenty minutes before the release, they canceled the rest of the event due to a storm. The winds were strong. Dirt and lanterns were flying everywhere. There was lightning off in the distance surrounding us. And everyone was running to their cars. It almost seemed like it was the apocalypse happening! Some people stayed and tried to light at least one, so our group decided to do just that.

As we were trying to light it, she got down on one knee behind me, tapped me on my hip, and I broke into instant tears. I don’t even think I said yes. I kept saying, “What?! Is this for real? Are you serious?” She then asked if it was a yes, and then I just nodded because I was sobbing too much. We came back to our house that we rented and she flew our parents out to Las Vegas. Our friends and family were there with a whole party set up for us. It was a year in the making. It wasn’t exactly what she wanted to do, but it was still perfect and makes such a great story.

We wanted our wedding to have a romantic/elegant vibe. Something that would be timeless when we looked back on it. It was also essential to us that we showed our love for one another through every detail of the wedding. We didn’t want it just to be an event; it was the best of our lives.

Alle already had her outfit as she knew she wanted to wear her mom’s wedding dress since she was sixteen. She altered it to look slightly different, but it fit her like a glove! She ended up wearing her mom’s dress, veil and shoes.

Kristi knew she wanted to wear blue for the wedding. She found her tux at a bridal expo at one of the booths and was instantly drawn to it. She thought about it for about eight months and ended up getting it at Friar Tux.

The big day was incredible. Alle was very, very calm (she’s usually the emotional one). She was just so content and happy that even though she was nervous, she was sooo ready to marry Kristi.

Kristi was crying all day as she was so filled with emotion. It was beautiful. It was everything we expected and more. The weather was perfect during the ceremony and a little chilly at night, but the dancing kept all of us warm.

Unfortunately, we both have lost three grandparents and one as most recent as this past May (Alle’s grandfather). We both have always been super close with our families, and it was important to us that we recognized those that could not be there physically. Near our welcome sign and guest book, we had a table with pictures of our grandparents who have passed with a sign that read “Forever In Our Hearts: In Loving Memory of those who could not be here today, but are forever in our hearts” and it listed their names.

We also had a table next to it with a generation of love theme that featured wedding pictures of our parents, grandparents, aunts, and uncles.

K: My absolute favorite moment is when I saw Alle turn the corner to come down the aisle. It was a moment I have waited for since I was 13 years old. My dreams were coming true, and I couldn’t believe it was finally happening.

Another favorite moment of mine was when it was getting towards the end of the night. Our coordinator had passed out these light sticks to our guests that were meant for our exit pictures. Still, the DJ started playing “Don’t Stop Believing” and “All I Do Is Win,” and every single person on the dance floor was waving them around, yelling the lyrics to the songs. It was a moment that just gave me pure joy, and I felt so blessed.

A: My favorite moment was turning the corner to see Kristi. I thought I was going to be sobbing like a baby. But at that moment, I stopped at the end of the aisle and stood there for about five seconds. And in those five seconds, I stared straight at her and smiled. I was so calm and at peace and just so content with that moment that all I could see was her and no one else. I didn’t stop looking at her the entire walk up or the whole ceremony.

People came up to me and said they were expecting me to look at guests walking down the aisle and I didn’t look at anyone but her. I swear I saw a beam of light shining around her, and I was just in awe. I was so ready for that moment that I was just floating towards her. It felt like everything was in slow motion. I wish I could go back to that moment.

Another favorite moment of mine was during our reception. Our coordinator didn’t let anyone come up to us because she wanted us to eat (she’s a life saver), but we held hands and took in the reception. We looked around and said, “wow, this is our wedding. Everyone here loves and supports us. This is amazing” That moment of taking it all in was one that I will never forget. There was just so much love that day that I don’t ever want to forget that feeling of pure joy. Honestly, it was total euphoria being there. We barely drank! We were just high on life.

I’ve never known this feeling before. The love that I have for Kristi has grown since the moment we got married. I have never had this overwhelming amount of love before. I love her more than the moment I met her, and it continues to grow every day. It is such a tremendous amount of security, knowing someone wants to marry ME! Kristi chose me and will pick me every day after that, and that is such an amazing feeling. I love being married!

K: Similar to Alle, there are so many definitions of marriage to me. Marriage, to me is having that life partner that you have chosen to experience all the highs and lows with. It’s not easy to promise someone that, but it couldn’t have been easier for me to make that promise and commitment to Alle. I’m a big sports fan and played sports all my life, so the easiest way for me to explain what marriage means to me is that we are a team.

About a month before we got married, it really settled in that Alle and I are a team for the rest of our lives. It is us against the world. It made me feel a new love for her that I never knew I could feel. We are each other’s safe haven, and the one person we can always count on in life. This is a team that we (hopefully) will expand in the coming years with children. It is such a crazy idea that we are now each other’s family and beginning the line for a new family to grow.

Heidi & Julia – A Surprise Proposal in the Rocky Mountains