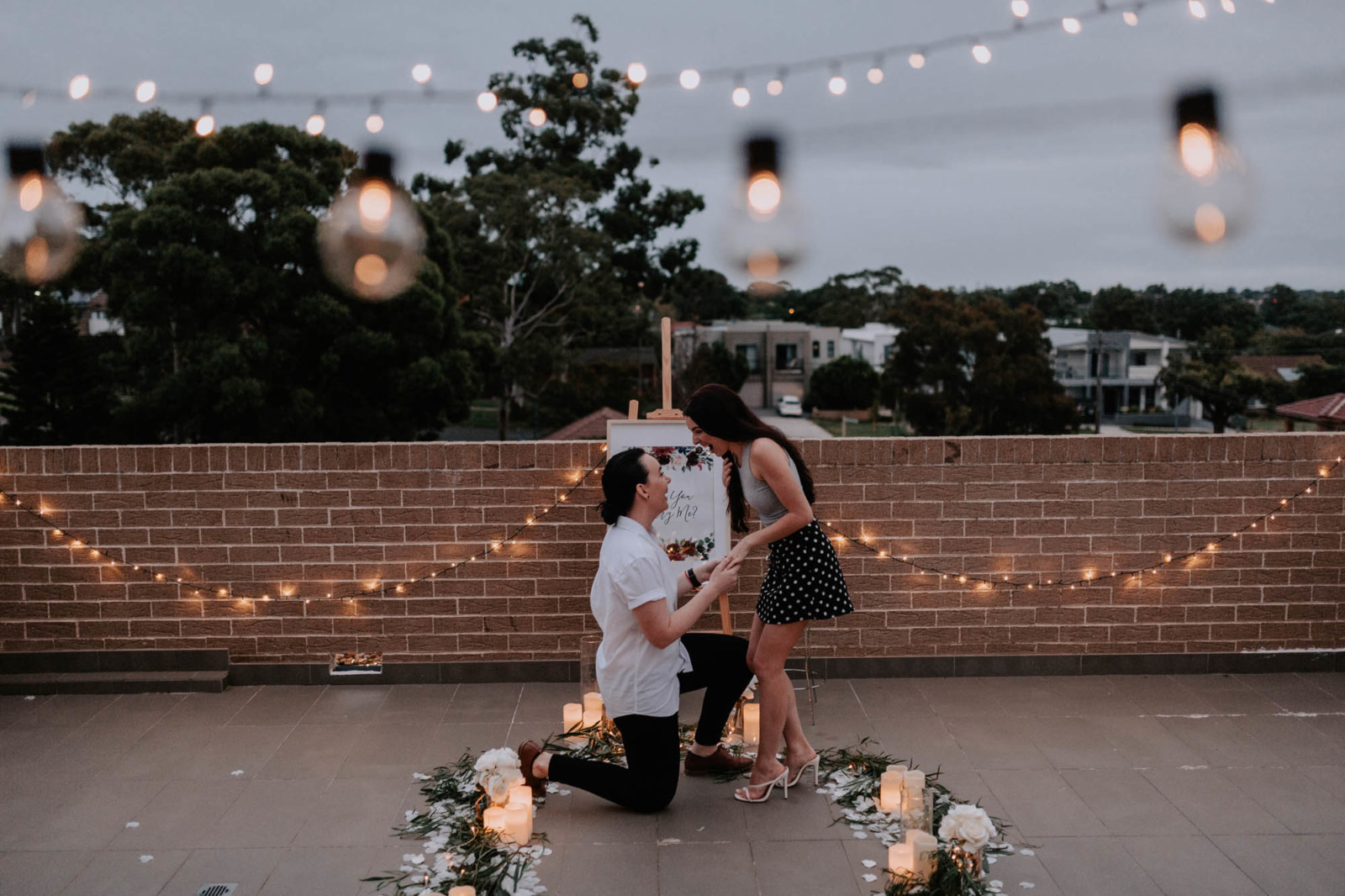 Melissa went through a few proposal plans before she landed on the final plan – a sunset proposal on their apartment building rooftop.

We have been together for six years and met in 2014. A friend of ours had shown me a picture of Alyse because she couldn’t make the drinks our mutual friend had organized. I said very abruptly, “I will wife her one day,” and we all had a laugh.

A few nights later, Alyse joined us at Newtown Hotel, where we met for the first time and hit it off.

A few ideas and plans were made over the year, but due to some COVID impacts, it made the process very challenging.

The original plan was to propose while on our cruise, which we were meant to be on over the Easter break. That plan failed due to all cruises being canceled.

Two other plans were created as a result, but each day the NSW government put further restrictions in place. Every day Melissa was on the phone with her sisters and close friends venting and re-planning, but it all worked out in the end.

The proposal was on Saturday 28 March. I had organized a company called ‘My Proposal & Co‘ to organize our rooftop on our apartment.

I told Alyse that I was going for a run, Alyse luckily didn’t question it.

Instead of going for a run, I let the proposal company into our basement so they could go up to the rooftop to set up. Luckily that all went smoothly.

I sent a text message to Alyse (who was still in her PJs having a lazy day on the lounge) that said to get up and get ready as she had a great idea for a date “corona style” (all pubs were shut at this point). Thankfully Alyse didn’t question or catch on at any point, went along with it, and got dressed.

I left the apartment and told Alyse to wait and watch her phone for a message. She receives the message, which said to go up to the rooftop NOW!

As the doors to the lift opened, our song started playing, I took Alyse’s hand, and that’s when she led her down the beautiful candlelit path full of rose petals and asked Alyse to marry me.

In typical Melissa and Alyse fashion, the ring was on Alyse’s right hand for the first 20-30 mins!

The actual diamond is Alyse’s great-grandmothers, and so it is incredibly sentimental.