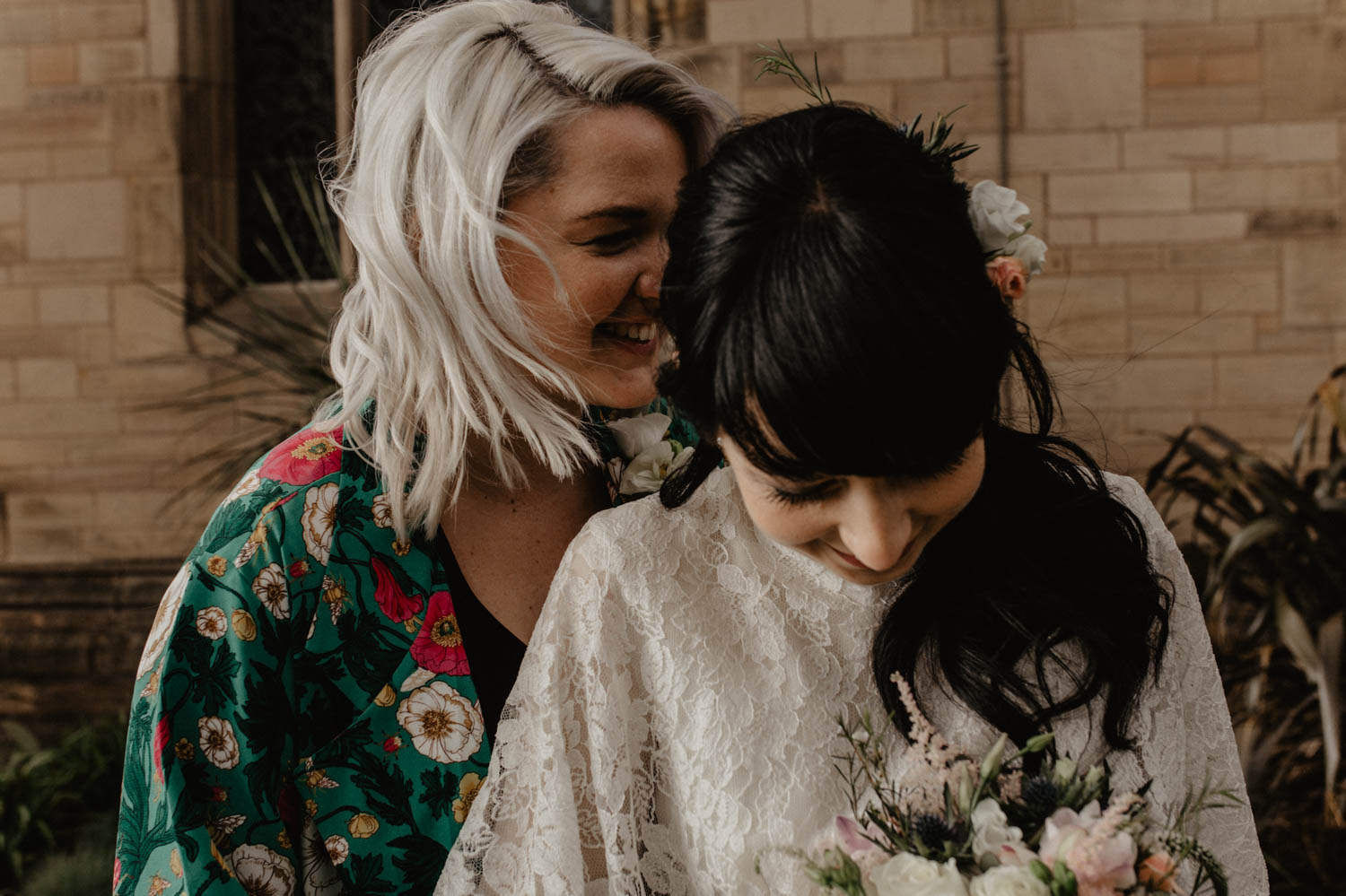 Growing up as teenage lesbians in the early 2000s, neither of us had ever thought that we would get married traditionally. As little girls, we had been fed Disney princess dreams of prince charming’s and white wedding gowns. But it soon became painfully clear that none of that was meant for us. It just wasn’t on the cards.

When we first met, it was a hazy Berlin summer in 2011, heady nights in city thunderstorms. But Nicola lived in the United Kingdom while Amy lived in Berlin for around a year. Somehow we knew that this wasn’t just another fling. The distance was too hard to manage, and we decided to break it off. We both moved on and had other relationships, but in classic lesbian fashion, we tried to stay in touch. In October 2014, Nicola had grown tired of her life in the UK and asked Amy if she was still in Berlin.

She moved over on New Year’s Eve, and it didn’t take long before we were dating again. There was this instant sense of calm and connection that we had with each other. It was like all of that time and turmoil in-between had never passed.

Before long, we were living together. It wasn’t always plain sailing initially, but we took care of each other and started to grow together. In October 2016, Amy arranged a British Sunday roast dinner. It was a tradition with our Berlin family, where we tried to find out how many people we could cram into our tiny apartment and fit around a table built for a maximum of four (I think the most we managed was fourteen!)

Having recently inherited some of her late grandmother’s jewelry, Amy had decided to pop the question at the end of the lunch; with all our close friends around, it seemed like the perfect moment. But she chickened out, and we went down the road to a bar instead, where she may have had a couple more drinks than she planned to. At the end of the evening, she was quite loudly, asking our best friend if she’d like to be a bridesmaid at our wedding. The friend in question was doing her best to quieten her down, but Amy isn’t known for being the quiet one in our relationship.

Back at home later that evening, she finally dared to propose to Nicola. Tears were rolling down her face, with the cat circling our ankles screaming for her dinner, and she somehow ended up using the wrong ring…!

Luckily she still said yes because, in the morning, Amy looked down and saw Nicola’s ring finger. “I think we had better talk about what happened last night..” She said. “Yes, we probably should.” smiled Nicola. At that moment, we both knew that the answer was still the same in the morning light. It might not have been some big fancy proposal with a song and dance routine. But it somehow fit for us. The engagement ring was a simple opal set in a gold band that didn’t even need to be resized. Amy had never come out to her grandma before she passed for fear that she wouldn’t accept her sexuality, but somehow she had the feeling that she would have loved Nicola just as much as her.

Months passed, and then the next Spring, we got tattoos to secure our engagement, and our friend asked us when we were going to set a date.

We realized that we’d been so caught up in the engagement part that we hadn’t even started to think about the wedding! As we were based in Berlin and many of our friends were back in the UK. Plus Amy’s brother in Australia. We decided to set the date a year in advance to give us plenty of time to plan. It would be in May 2018, and the save the dates soon went out. Both of us were nervous to tell our families. It seemed to them quite soon to be thinking about marriage, but when they saw how determined we were to make it happen, they soon started to dream up plans with us.

Amy is a natural organizer, and so she took up the task of planning.

Even though we had found a beautiful venue run by friends of friends in Berlin. There was a significant language barrier when it came to the wedding’s legal side.

We decided that we would have to get legally married first in the UK and then host our reception in Berlin shortly after that. With just six months to go, friends and family rallied round to help us set a second date for Liverpool in April. Only one month before our official date. We invited a smaller group to celebrate with us at the official ceremony. Which we decided would be held in Nicola’s hometown, just an hour away from where Amy had grown up.

Over the final months of planning, it started to become really clear that Nicola was struggling with the arrangements and the whole process. Nicola’s father was unable to attend the wedding due to ill health and seemed to be taking its toll on her feelings towards the day. Those months leading up to the wedding should have been a magical and exciting time. We’ve seen all the montages of girls trying on outfits with girlfriends and family, glasses of champagne, and beaming smiles.

Not everything can be like it is in the movies, and what they don’t tell you about planning a wedding is that it will be the biggest test of the strength of your relationship – and your own sense of selves.

Looking back, perhaps we should have seen that those months and the flags that certain things were going to be challenging to navigate. But somehow, we knew that deep down, all we wanted was to be together. To have the same wedding day that we had dreamed about and never imagined we would be allowed to experience. So we kept going against all the odds, and in April 2018, we were married at St. George’s Hall.

As it was so last minute, we chose a local restaurant for a small reception afterward. We really want to thank Lydia and her team for the excellent care they took to make our day special on short notice.

It was a more beautiful day than we could have imagined. As Amy walked down the aisle with her father, “Be Mine” from Alice Boman played out. It was clear at that moment that all this day was about for us was being able to stand up proudly in front of our friends and family. To tell each other that we would take care of each other no matter what for the rest of our days. We have learned that a wedding is not about the flowers, what you wear, the catering, or the venue. It’s about the people who are there to share it with you and share in your happiness. That goes for a marriage too.

Our friend Aude read the following lines at our ceremony:

“Where does it all lead? What will become of us? These were our young questions, and young answers were revealed. It leads to each other. We become ourselves.” – Patti Smith, Just Kids.

Just one month later, we had our official wedding in Berlin. For this, we really had to lean on our family and friends for support to bring our dream to life. And they did not disappoint us. Two friends of ours who are set designers by trade built a beautiful wedding arch under which Amy’s brother Richard officiated a small ceremony where we read our own hand-written vows to each other. Aude performed a beautiful rendition of Elvis’ “Can’t Help Falling In Love With You” and, of course, had everyone in tears as soon as she started singing.

There are so many details now that made that day so special. But it was really the way everyone showed up for us was just an unreal feeling and one that we will never forget. Amy’s dad made a memorable speech, and afterward, a dear friend of ours went up to him and hugged him and thanked him for what he had done for our community. I remember my dad telling me that he didn’t even realize we had a community and how proud he was to be invited to be a part of it now!

The truth that they don’t tell you in the bridal magazines and on the Pinterest boards is that weddings will always bring up hidden things. In your family, or your friends. It will bring out sides of people you might not have known were there. But it will also allow people to surprise you in beautiful and positive ways. The people that showed up the most for our weddings were not necessarily the ones that we had counted on. But that was the magic of going through that whole process and coming out the other side as wife and wife.

We won’t sugarcoat it; the first couple of years of our marriage have been tough going. The issues that came up around the wedding don’t go away just because you lived a fairytale for one day (or in our case, two!). But it’s how you treat each other during those most difficult times that will make you realize what choosing to get married is really all about.

Someone said to me recently, take those moments and those memories that make you feel good and don’t let anything spoil them. Remember things how you want to remember them. Nothing can take that away from you. Indeed, sometimes things don’t always work out exactly how you’d thought they would. But once you let go of those expectations, you can make room for something so much more.

This is the poem that Amy read to Nicola on their first anniversary.

Marriage is not a house or even a tent

it is before that, and colder:

the unpainted stairs at the back where we squat outside, eating popcorn

the edge of the receding glacier

where painfully and with wonder at having survived even this far

we are learning to make fire

Emma & Kim – Falling in Love over a Decade