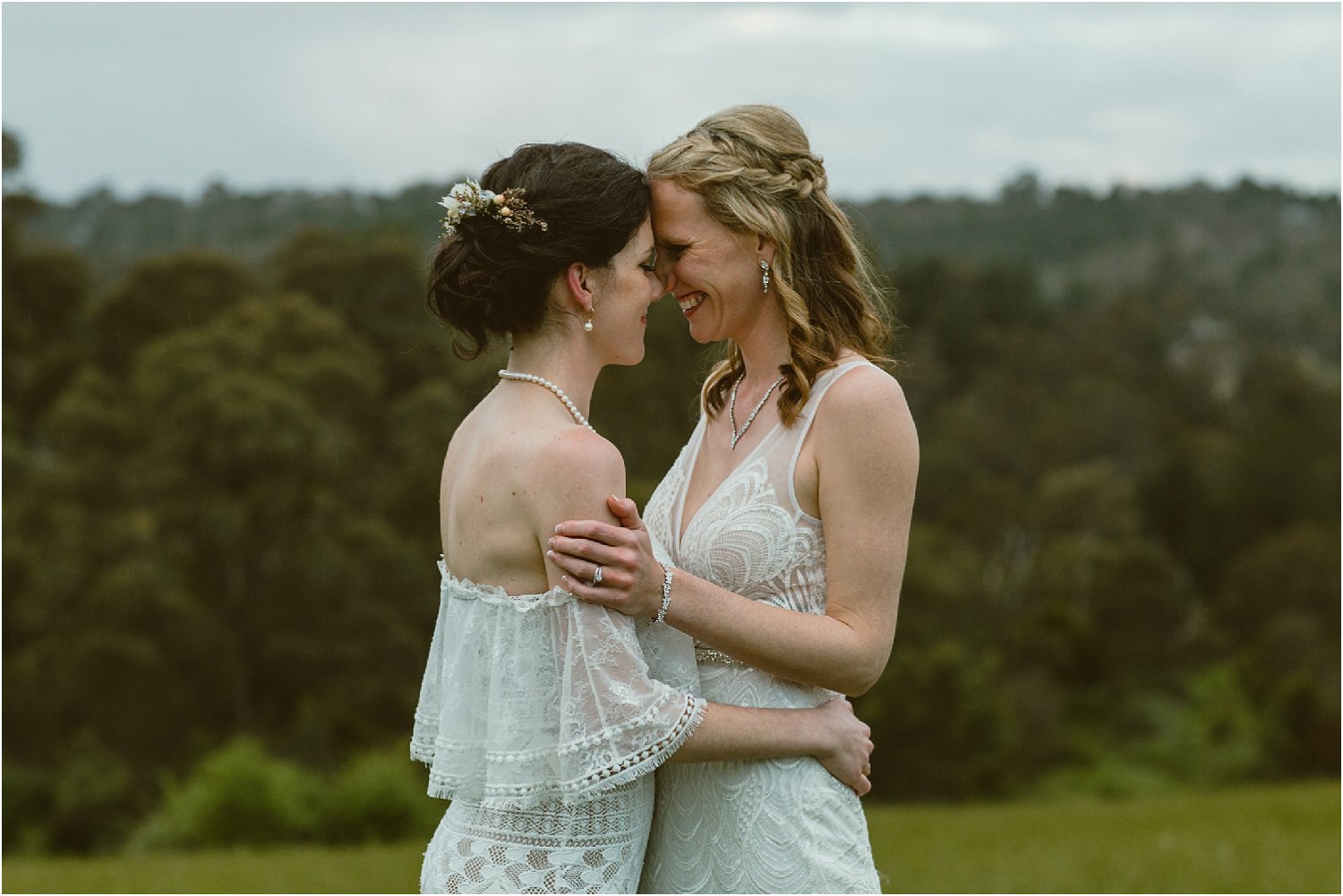 Shan and I were brought together seven and a half years ago when we both least expected it. Shan lived in Far North Queensland until she was 18, whereas I have always lived in Melbourne, so we grew up on opposite sides of the country. She moved to Melbourne in 2010 as was running competitively at an international level at the time, and her coach was based down here. A year later, Shan and I met after a mutual friend encouraged us to get to know one another.

There was an instantaneous connection even though neither of us was looking for a relationship then. It felt as though Shan was meant to be a part of my life from the first time we spoke. We have been total constants in each other’s lives from day one, and neither of us has looked back since.

We did the typical thing of moving in together after nine months because we were pretty much living together anyway. On our anniversary of having been together for six years, Shan proposed.

When I was planning to propose, the marriage equality debate was raging in Australia. Bringing out the best, and sadly, the worst in the people around us. We had both always been adamant that we wanted to wait until it was legal to get married. So we didn’t plan on getting engaged until we knew for sure that our marriage would be legally recognized. However, our sixth anniversary was about two-and-a-half months before the vote was counted, and I didn’t think that I could wait one whole extra year before asking. So I hedged my bets and purchased a ring anyway.

I booked a hotel in the city for our anniversary weekend, taking Amy for lunch and an afternoon at the spa. Little did she know that while she relaxed, I was feverishly checking in with one of my good friends. Who I had given a bunch of fairy lights, copies of every photo we had ever taken together, our favorite foods and drinks, candles, bath bombs, incense and strict instructions to turn all of that into something MAGICAL in our hotel room while we were gone.

Unfortunately, there was no actual asking…

When it came to the actual proposal, I got uncharacteristically shy/nervous and simply handed Amy the ring, stating, “it’s an engagement ring.” Total anticlimax and not at all what I had planned in my head!

I was so happy to be engaged to Shan that the way she proposed didn’t matter to me in the slightest. In fact, it was very ‘us’. We are not into grand gestures, and both hate being the center of attention. So a low-key, romantic proposal with just myself and Shan was absolutely perfect.

The lead up to our wedding was such an exciting time for Shan and I. As we gradually worked through our ‘to-do’ list preparing for our big day.

Unfortunately, though, we were met with some resistance when it came to our families when we announced that we were engaged. Both of us grew up in very religious, traditional families. It took some time and a lot of talking for Amy’s parents to accept our relationship and come around to the idea of us getting married. This was all very stressful for us. With lots of tears shed, even though we had been a couple for six years before this. And this was an issue we came up against several times with other extended family members.

Shan’s grandparents and one of my grandmothers did not attend our wedding, as well as some aunts, uncles, and cousins who were not accepting of our relationship.

This just made those who were supportive of us even more special.

I remember ringing my grandmother (my father’s mother). Telling her the news, and her excitement as she told me how delighted she was. This was the first family member (other than my two sisters) who had been genuinely excited for me and who had actually said congratulations and her support warmed my heart immensely.

We were surprisingly traditional when it came to our big day, for a non-traditional couple. Perhaps this resulted from both of us having always wanted to get married but never being sure whether it would ever eventuate!

We spent the night before our wedding apart. I spent the night with my family, and Shan having her bridesmaids stay at our house. Together with our bridal parties, both of us got ready in the beautiful cottage at Inglewood Estate. But we didn’t want to see each other’s dresses or our hair and make-up before our reveal. This took some negotiating by our bridesmaids as the two bridal parties moved around the cottage for photos and as we got ready. Still, it meant that we got to spend the morning (before getting dressed) together. Keeping each other calm, with all of our bridesmaids together as well.

It was also really important to both of us that we had our dads walk us down the aisle. There were definitely points in time where Amy was unsure whether this would be a possibility or whether her parents were going to be there on our wedding day at all. We were so fortunate to have many people offer to walk her down the aisle if need be. In the end, this was a dream that ended up eventuating. And we were really grateful that we could incorporate those ‘traditional’ elements into a ceremony that was very much our own.

We also had our families involved in our wedding party. I had my two sisters as bridesmaids, and Shan’s maid of honor was her twin sister. We also had two of Shan’s younger sisters as our junior bridesmaids. Shan’s nephews and niece, along with Shan’s youngest sister, were our flower girls and page boys too.

By far, my favorite memory was “The Reveal”. Our photographer, Lauren, mentioned the concept to us in our first meeting with her, and we were totally sold! It was the perfect time for us just to be together and to have that special moment of seeing each other for the first time before anyone else. I have vivid memories of walking around the corner of the old chapel and seeing Amy standing beneath the willow tree. Back to me, with her beautiful gown flared out behind her. She was absolutely stunning and truly took my breath away.

I loved the reveal and absolutely loved those moments where it was just the two of us enjoying being with each other. But I also loved that our wedding ceremony was so personal and crafted perfectly by our beautiful celebrant, Jess Hills, to reflect who we are. We had all of those who were most important to us involved in different ways throughout the ceremony. I really loved sharing our vows that we had both written individually with each other in front of our family and our friends.

Things not going to plan, well on paper, everything that COULD go wrong DID go wrong! The sun shone all week in the lead-up, but our wedding day arrived with rain and freezing cold weather. Our outdoor ceremony had to be moved indoors (although Shan was secretly ecstatic about this!). We lost Amy’s wedding ring along with our custom ring box, and some of our bridesmaids didn’t get the memo to come down for photos and only arrived for the last five minutes of pictures with the bridal party!

Regardless of everything that didn’t go according to plan. We were both so totally ecstatic to finally be able to get married that nothing could have shaken us on the day. Just taking everything in our stride, laughing (A LOT), and moving on. We had each other, and that was all that mattered.

Ashley & Tyler – From Rock Bottom to in Love