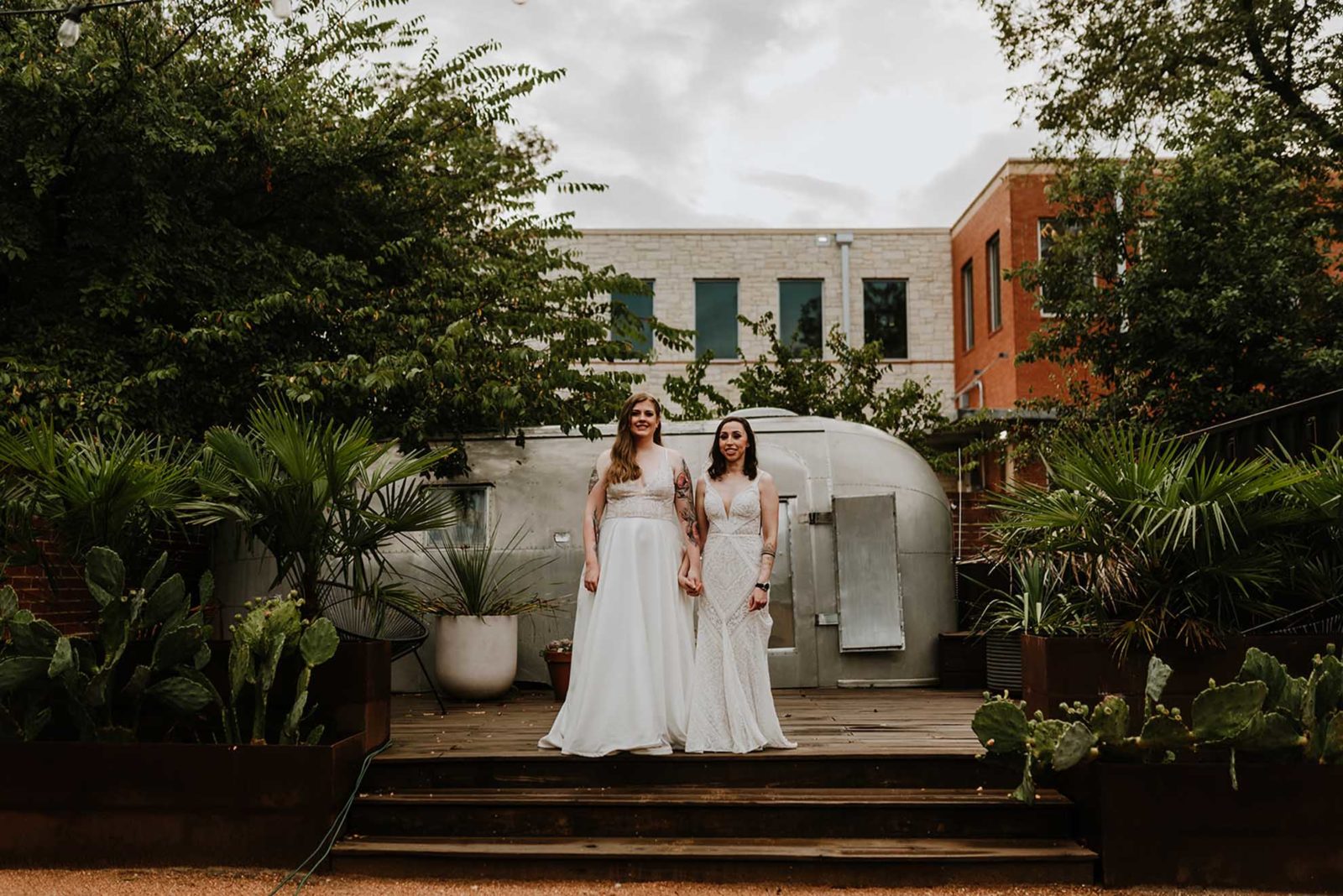 We have been together for ten years. We met through Andrea’s best friend, who happened to be in the same sorority as Ara. At the time, Andrea was going to school in Boston, and Ara was going to school where we both grew up in El Paso. We hung out a few times during the summer of 2010 when Andrea was back home from school, but once December rolled around, Andrea realized she had feelings for Araceli. However, Araceli wasn’t in the same headspace quite yet. It wasn’t until Andrea left back to school in Boston that Araceli realized how much she missed her and her ridiculous laugh. After countless texts, late-night phone calls, and study date video chats, we officially began dating in May 2011.

Tell us about the Machu Picchu proposal.

After being together for eight years, Araceli proposed the exact way she had been planning for the last three years. Andrea had always wanted to hike Machu Picchu and casually mentioned it to Araceli one afternoon.

And it was in that simple moment that Araceli determined exactly how she wanted to propose.

So, after finishing school and saving some money, we finally took a trip to Peru in August 2019. Towards the end of our two-day hike, just as we caught our first glimpse of Machu Picchu from the Sun Gate, Araceli pulled Andrea to the side and asked her to marry her.

It was perfect and, as Araceli had always promised, completely worth the wait!

What was the inspiration behind the vibe of your wedding?

We both have complicated family relationships but have found a sense of home in each other. A place of comfort, a solace from the outside world, a home we created together.

We wanted our entire wedding to be based around the idea of home- small/intimate, family-style food. Each table was named after the apartments we had lived in. There was a picture of our dog at each apartment at each table setting.

While we each wrote our own vows, we ended them both by saying, “You are home to me.”

We started the day with some smoothies together before getting ready with our officiant, reader, and a few friends at our Airbnb. We decided once we started getting hair and make-up done, we would not see each other before the first look. So if we needed to move rooms or anything, there was very carefully coordinated movement with the help of our friends.

We hid in the airstream until the ceremony started after taking pictures together and with close friends and family since the rain had stopped. As soon as we got in the airstream, it began to pour, allowing us to have a private moment as we tried to wait out the rain. We also had to take a shot before we walked down the aisle! (Ara has a tradition of taking a shot before any big occasion in her life, so this couldn’t be any different).

As it was clear the rain was not stopping, our planner brought us a big umbrella, and we braved the rain, trying desperately to hold our dresses up and not ruin our matching rainbow, Toms. In all the rushed excitement to get us into the venue at the right time, we accidentally sprinted down the aisle! There’s a video from a friend where you can see the moment Andrea turned to Ara to say we are probably walking too fast and laughing. The ceremony was officiated perfectly by Ara’s friend, including a reading of a poem by Tyler Knott Gregson by another friend about loving each other in the memories.

The reception was then filled with fantastic food (essential to us), including a charcuterie platter on each table and a dessert table with several different options. Our toasts were hand-picked by us because they are two of the closest people to each of us. They balanced each other perfectly. With one being more sentimental and one that played to the crowd a little more. But both tied in our concept of home for our wedding and marriage.

Our first dance was a little nerve-wracking, but we learned a simple box step and kept to it throughout the song. The only flare we managed to get in was a few twirls of Ara, but we had a great time with it.

The music for the reception had been all Ara’s development making sure the party would go hard the entire time. We even had twenty minutes of old 2000’s emo music for Andrea, which allowed for a fun screaming fest! There is one specific picture where you can tell we are laughing and smiling really big as the two of us dance together when Ara spun Andrea to a slower song, which is a big deal for us! See, Ara is a lot smaller than Andrea and anytime in the past that she has tried to spin Andrea, we end up toppling over. But this time we did it without toppling!

Towards the end of the night, after the rain had stopped and the humidity from it had decreased, we were able to open the venue’s garage door and have people outside to play the yard games we had available.

Our exit was supposed to have rainbow confetti. But there was a mistake in getting it, so we opted for rose petals instead, which still made great pictures.

Both of our favorite moments was a moment that wasn’t supposed to happen. While we were hiding in the venue’s airstream before the ceremony, it started to downpour outside. So the wedding ended up being delayed a little bit to see if it would stop raining. During this time, we relaxed and enjoyed the moment with each other. We played Mumford and Sons on our phone and sat back with our feet up. Taking a moment to breathe and enjoy it.

Do you have a stand-out vendor?

Our photographers were incredible! They just understood our personalities, and it helped get the best pictures. We even told them we would go to Big Bend for a few days after the wedding but hadn’t been able to plan much. So they took it upon themselves to send us a detailed list of where to visit and what to expect.

Our planner was also excellent. We had a particular image of what we wanted for the day but often had difficulty communicating it. She somehow managed to make it exactly what we wanted.

Marriage to us is both about commitment and building a family together. It’s a sense of home and comfort in each other. It’s working together to better ourselves and each other and about building a life we love together.

Advice for other couples planning a wedding?

Three pieces of advice for other couples-

Alejandra & Rachel – An Intimate Wedding in a Loft