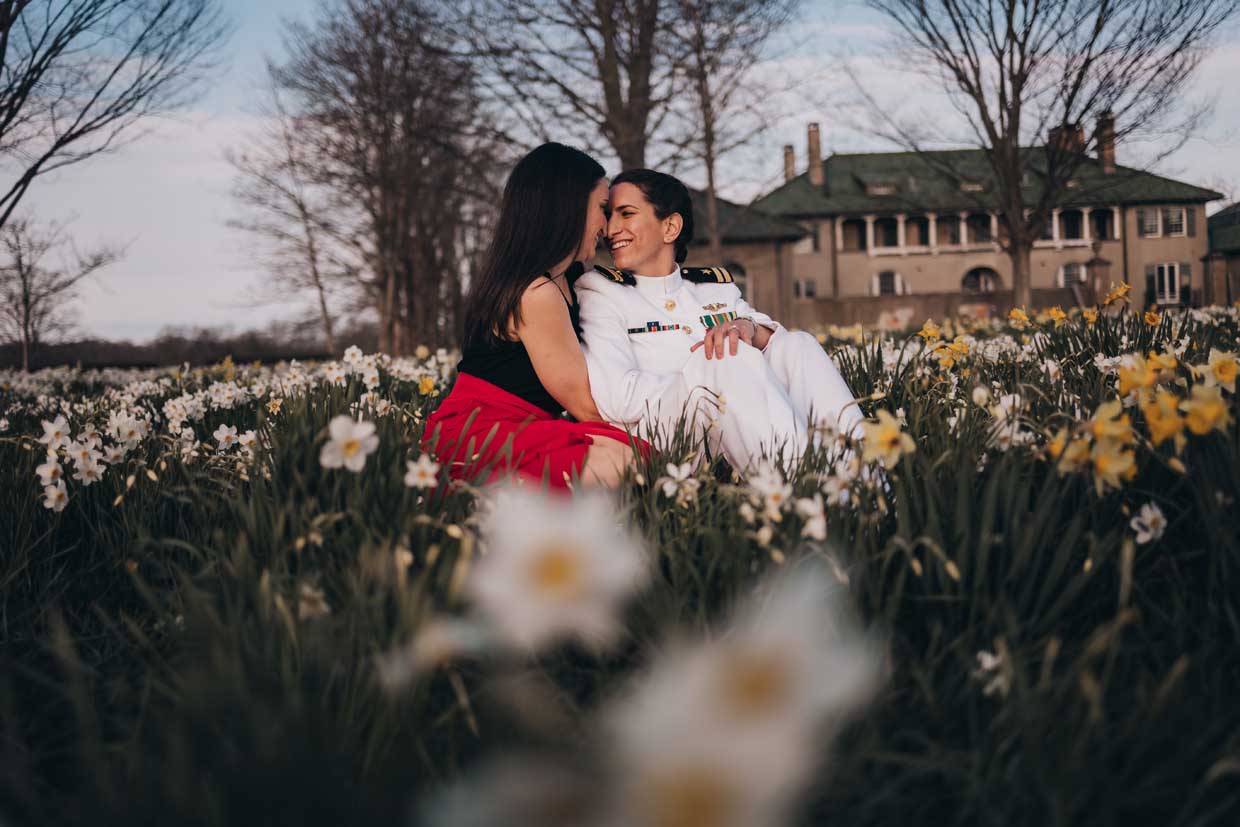 After Emily’s original proposal, their relationship was long distance for nearly four years because of their careers in public health and the United States Navy’s nuclear submarine force.

How long have you been together, and how did you meet?

In some ways, we are the luckiest women in the world because our meeting defied the odds. The overall global acceptance rates for the Rhodes Scholarship and Marshall Scholarship stand at 0.7% and 4%, respectively, and in the statistical unlikelihood that two selected scholars end up at the University of Oxford at the same time, they receive an assignment to one of 39 different colleges.

We met at our indoctrination event at Magdalen College in Oxford in October 2016, although Emmie (a 2016 Rhodes Scholar) initially found Andrea (a 2015 Marshall Scholar) overwhelmingly extroverted. However, a bit of flirting at the follow-on dinner and a taste of port at the after-party led us to a karaoke duet of Shania Twain’s “Man! I Feel Like a Woman” and infinite laughs.

We have been inseparable (emotionally—at least) for nearly six years!

The bottom line is that Emmie bamboozled Andrea. After savoring our first year together in the United Kingdom, Andrea relocated to Charleston to commence nuclear power training with the Navy while Emmie completed her second year at Oxford. In the 365 days that followed, we only saw each other over the winter holidays, for a week-long hiking trip in March on the Isle of Skye, and upon Emmie’s move to Baltimore in September to start working for the Health Department.

On our train ride from London to Scotland in March, we had a five-hour discussion about a list our friend had generated, entitled “Meditation on Marriage: Questions to Ask Before Engagement.” After that, our values clicked, and once engagement plans seemed tangible, Emmie requested to be on the receiving end of the first proposal.

When Andrea received an assignment to her first submarine in Washington State, she voiced reservations about getting engaged with more long distance and deployment on the horizon. Emmie then took matters into her own hands and proposed on the way to the Navy Birthday Ball in Washington, DC, on October 13, 2018—insisting on this love no matter the trials ahead. “I know what I want,” in her words

Not much has changed! While we were over the moon to commit to our life together, our day-to-day did not dramatically shift after getting engaged. In many ways, it was our relationship’s natural progression, as we were already best friends and emotional anchors.

With that said, our wedding means the world to us: the opportunity to celebrate with our loved ones (and each other!) in the same place is a rare treat. The event will bring together nearly 200 of our friends and families from across the United States and the globe—a testament to the integral communities in our love and marriage.

Our inspiration stems largely from the circumstances of our meeting and the friends and family who have sustained our relationship since then.

Before the past half year on the East Coast, we spent the middle four years of our relationship apart, including two submarine deployments for Andrea out of Hawaii and Guam. People often ask how we managed this separation, and we point to the people we love as the answer; they are reflections of us even when we are apart.

Our Oxford Ball-themed celebration is mostly a tribute to them. Following a brief ceremony, we will have a six-hour party with four food trucks (tacos, sliders, pizza, and ice cream), bocce courts and cornhole boards, a s’mores station, a photo booth, a petting zoo, and—of course—a large, open-air dance floor.

Military weddings often feature a sword arch as the couple leaves the alter as a married entity. As a tribute to the women trailblazers in the submarine community (and the broader military), we will have an all-women sword arch featuring eight of Andrea’s closest Active Duty friends in the iconic Navy choker white uniform.