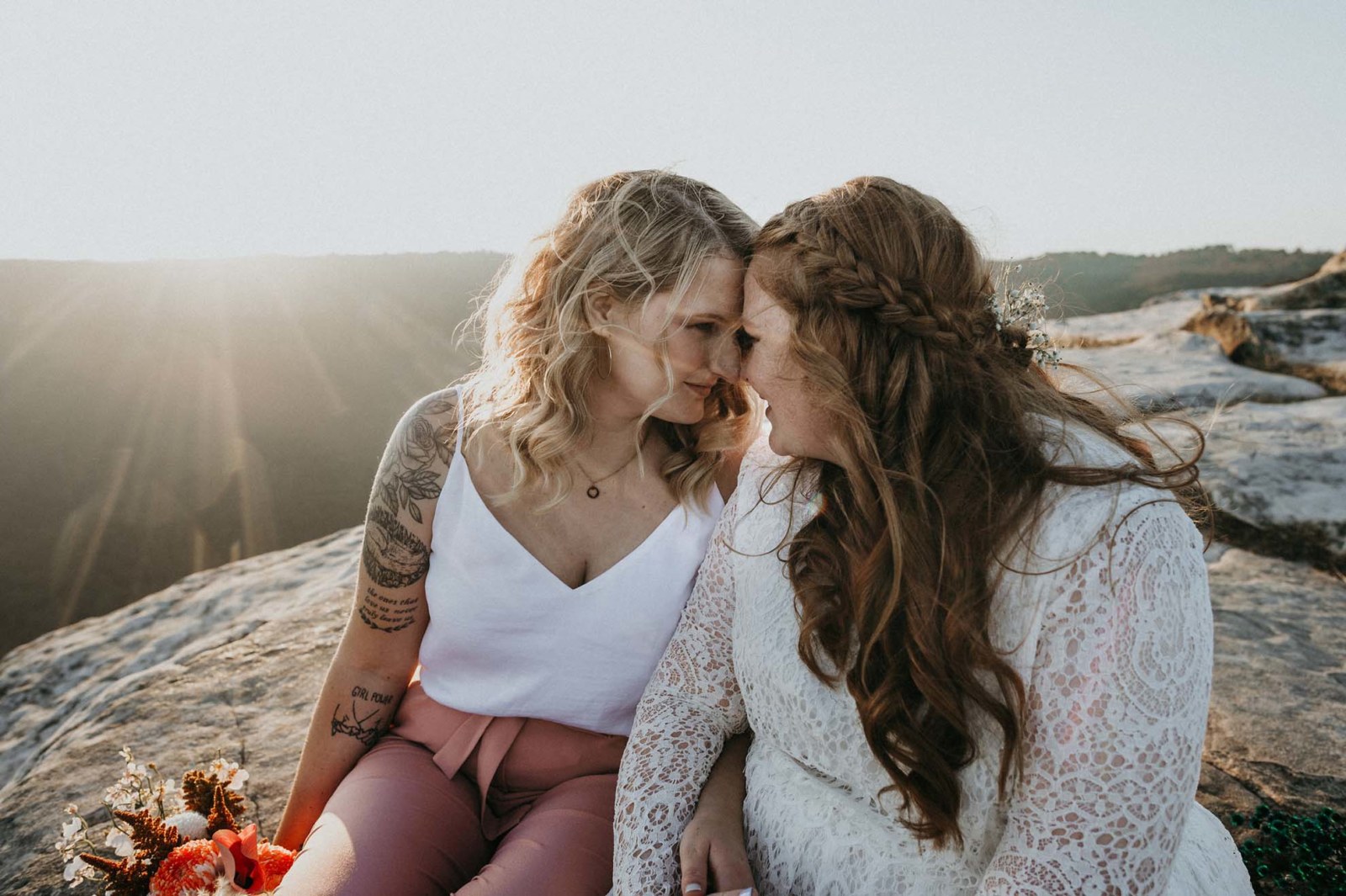 Annie and Christy-Lee met when they were just twelve years old. Christy-Lee’s family had moved from Sydney to rural New South Wales and started attending the same church as Annie’s family. However, it wasn’t until some time later that love began to blossom. They eloped, with a handful of family members, in a simple but beautiful ceremony at Lincoln Rock in the Blue Mountains.

Talk us through the engagement.

C: Well, Annie and I were moving to Sydney, but I had to move alone, and she was set to join me a few months later. I pretended that I was moving on a particular date and had Annie’s sister help me keep Annie out of the house! I blew up a bunch of white balloons, decorated the house with flowers, and lined a pathway in the backyard with Annie’s favourite lollies.

When she came home, she walked through the house while ‘ Like Real People Do’ by Hozier played in the background, and she eventually found me waiting for her in the backyard garden (that featured a beautiful fountain and all!) ready to ask one particular question.

A: We were engaged for a little over two years. We wanted to get married so much sooner and considered going overseas instead of waiting for the Australian government to change the law, but in the end, we were thankful we waited and could do it with all our family in tow.

You eloped! Tell us about the wedding planning process.

A & C: We didn’t have a heap of money to spend and didn’t really want to spend a lot of money, even if we did have it. Because we had waited such a long time to get married, legally, the most important part of our wedding was being surrounded by people who loved and supported us as individuals, as a couple, and leading into marriage.

We organised everything through the Elopement Collective and, on their suggestion, settled for the Blue Mountains. The area has a lot of history for us as a couple, so we were excited to have our ceremony at Lincoln Rock.

For our reception, we just planned to have friends and family back at Christy’s parent’s house for pizza, drinks, dancing, and a whole lot of fun.

Your styling and outfits were simple but beautiful. Can you tell us more?

A & C: We didn’t need to do a lot. We asked some friends to make some floral arrangements and decorated the house a little, but otherwise, we let the ceremony location and our love story speak for itself.

C: I’m not one for shopping or dresses. I looked on ASOS at the bridal range and found a dress that I liked. I ordered it, tried it on, and that was that! I kept it in the cupboard until the week of the wedding, that’s when my Mum forced me to try it on again so that she could hem it!

A: I also brought a dress from ASOS, but I wasn’t sold on it when it arrived. It was essential that I felt like myself, and I don’t really wear dresses very often. So, I went on the hunt for something else! I wore a pair of pink pants that I fell in love with, and a white top. I felt like me, and that was really wonderful.

We love that! Tell us about the wedding day – what were your favourite moments.

C: One of my favourite memories from the day was walking up to the ceremony with my Dad, and the moment we both saw Annie, Dad said, ‘Wow, she looks beautiful,’ and I started crying immediately. We also asked my brother to pray for us as a couple at our reception, which was really special.

A: One of my favourite moments was after the ceremony. Our families left, and we took a moment to acknowledge what had just happened. I don’t think either of us was prepared as to how much we would cry. Our celebrant, Josh, gave us both a tissue pretty early on in the ceremony, but they were soaked within seconds. Thank goodness Christy-Lee’s Mum, Heather, was there to pass us a few more so that we could get through our vows.

What words of wisdom would you like to pass on to others planning their wedding day?

Cherie & Kirsten – A Wedding In The Blue Mountains

Alyce & Danielle – A Homestead Wedding in the Blue Mountains