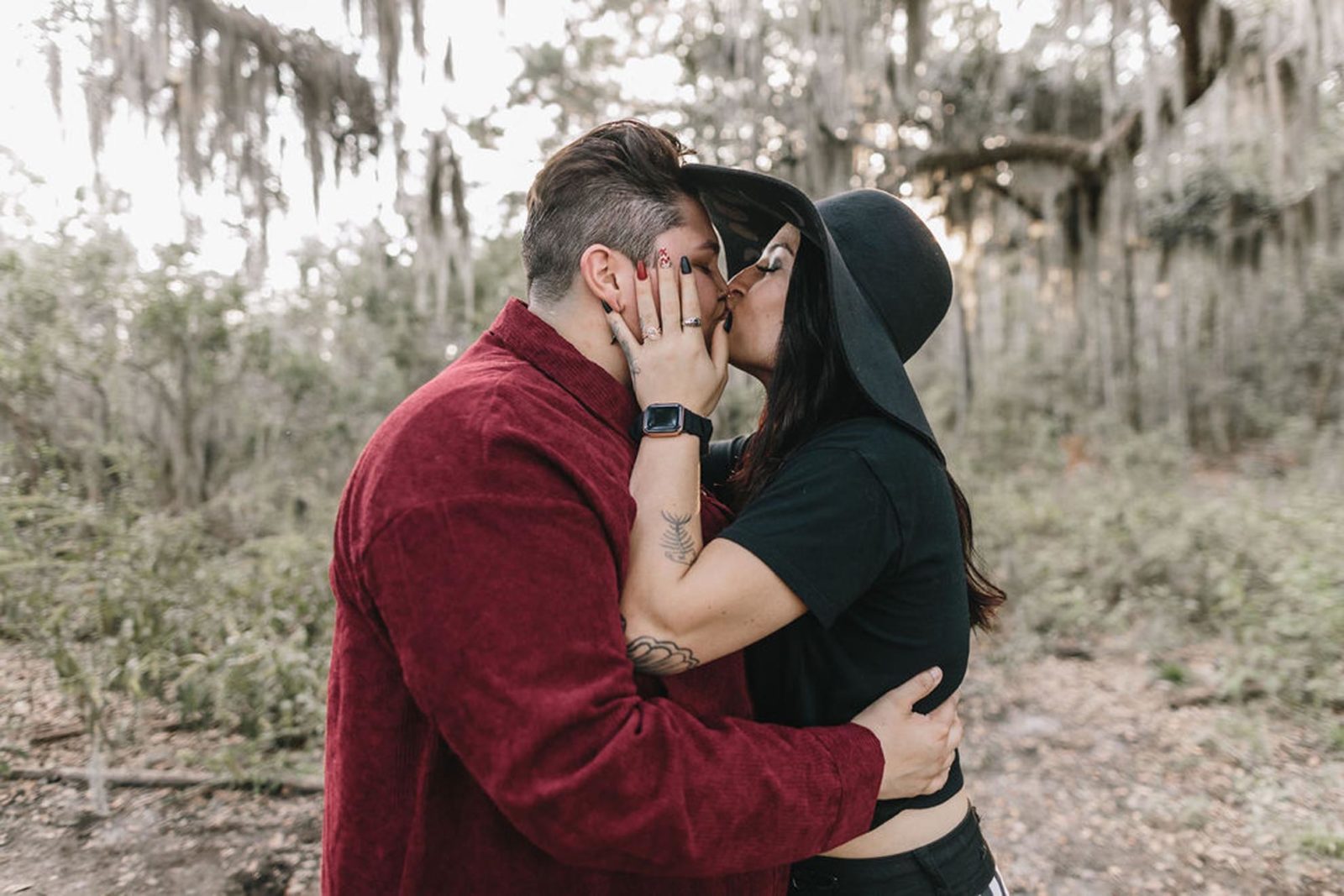 With a coffin-shaped engagement ring box, Jade surprised Ariel during a photoshop by getting down on one knee and asking, ‘will you marry me?’

Ariel and I went to the same high school and even had many of the same friends but never interacted with one another. Fast forward a couple of years after graduation, I found myself visiting a local gay bar with some friends. We all went to an outdoor area, and I saw the most beautiful woman I’d ever seen. As cheesy as it sounds, I feel like time stopped for a moment, and all I could see was her laughing and smiling. Lucky the friend I was with knew her and introduced us. We had a small chat and ended up exchanging each other’s social media.

Over the next week, Ariel was very persistent in making plans to hang out. At the time, I was extremely insecure and thought Ariel was way out of my league, so I kept making excuses of why we couldn’t hang out like studying, family events, etc. Ariel stopped talking to me for a few weeks, and I could never stop thinking about her. Finally, I mustered up the courage to ask her on a date, and the rest is history.

We just celebrated our seventh year together, and they have been the best seven years of my life.

Tell us about planning the proposal – how did you keep it a secret?

The proposal was such a long process, and even worse, I couldn’t tell her about it.

The planning took about a year because I knew I wanted to do it on our anniversary vacation. We take one every year to a place both of us have never been. We actually drew Savannah, GA, out of a hat with four other areas.

After the trip was booked, I immediately started looking for a jeweler. We live in a conservative part of our country, and it actually took me a while to feel comfortable enough to go in person.

While I waited for the ring to be ready in six months, I knew we needed new couples’ photos. So I scoured Instagram for a local photographer in Savannah that was LGBTQ+ friendly.

It was hard to keep all this a secret because you’re so used to telling your best friend everything. I was very tight-lipped but absolutely wanted to shout it out loud.

Tell us about the proposal day! Of course, we want all the juicy details!

That day was beautiful! I told Ariel that I had booked us a surprise couples photoshoot the morning of, which I hadn’t expected to do. We usually always get photos done every year. A couple of our friends joined us on our trip, and Ariel’s best friend held the ring box the whole trip until that day. Once we were ready to go, we went to downtown Savannah and explored the city until our photoshoot. We drove to an old dairy farm full of beautiful Spanish moss trees and walking trails. I snuck to the back of our car to slip the ring box into a bag that would hold our phones, and our photographer would actually carry this bag the whole time.

We started taking photos to get comfortable. The photographer asked us lots of questions to get to know us, and then she took us into this walking trail that you had to walk across a wooden board to get to. There was a natural arch we had to get under, and we were both shocked to find this massive, gorgeous Spanish moss tree in the middle of the trails, hidden away. It was very magical!

The photographer and I had planned to have Ariel take a few photos of just her so that I had time to put the ring box in my pocket. Once the box was in, she had us look away from one another and that was my queue to take the position. I had this big speech prepared, but my words disappeared when Ariel turned around, and I saw her face. I said, “Ariel, I’ve loved you for seven years, and I want to keep loving you forever. Will you marry me?” She said yes! We both cried and embraced for a little bit. She was in utter shock.

Once the session ended, I told Ariel I had a couple of surprises to give to her. First, I had a black denim jacket made for her and embroidered on the back says ‘Til Death Do Us Part Mrs. Rios.’ The second gift was a video of a 13-day countdown until we were engaged. I had our closest friends and family count down the days and expressed their excitement for us. I couldn’t have asked for a more beautiful day, and it’s a day I will cherish for the rest of our lives.

Weirdly enough, we do feel a bit different, in a good way. It’s hard to describe the feeling of being engaged vs. being committed without the title to be married. I think it’s a huge advancement in a relationship because it’s one thing to say we will get married one-day vs. I purchased a ring, and I’m telling you now we will be married.