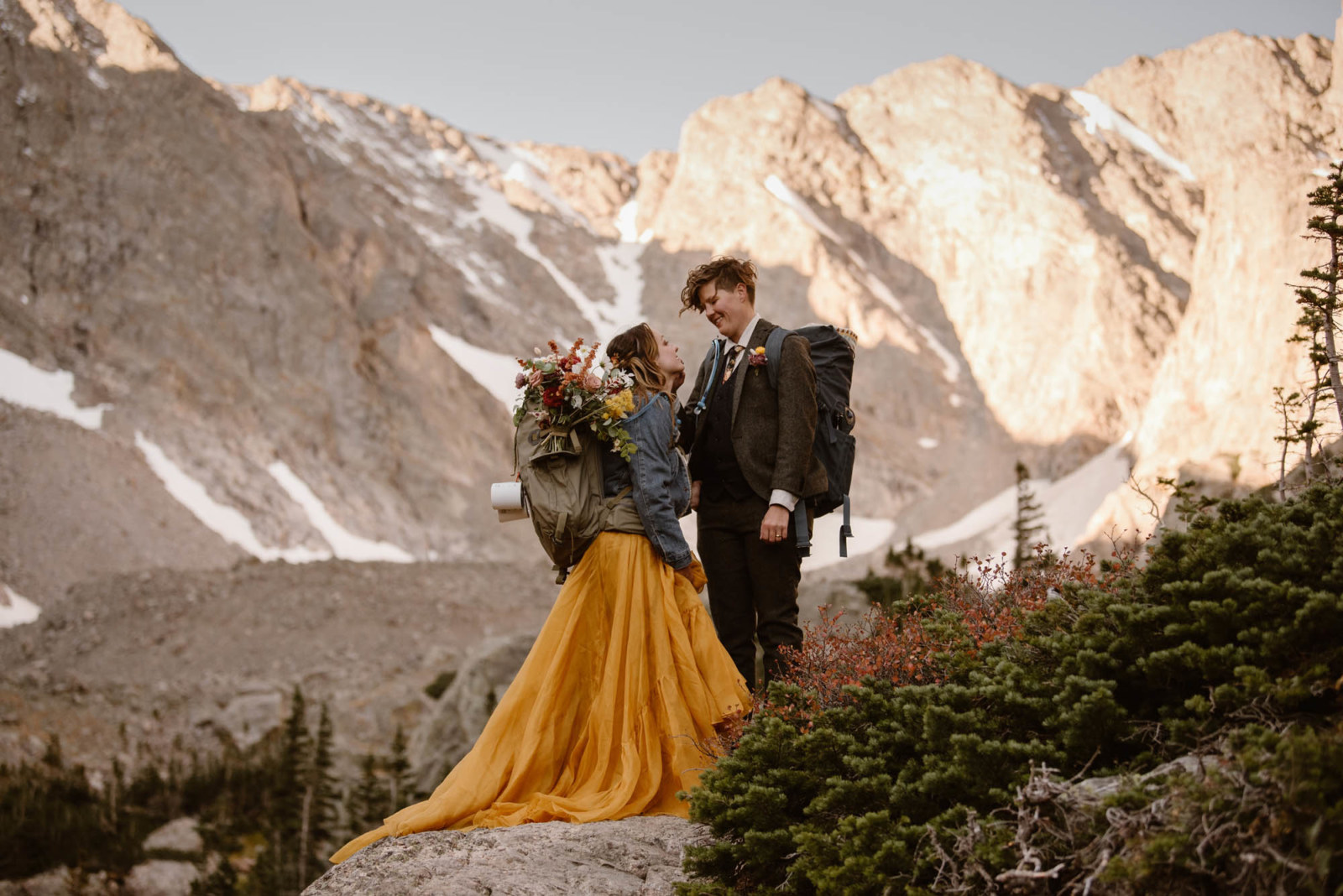 Deciding that their commitment to marriage was something that they only wanted to share between the two of them, Ash and Bree eloped while hiking in the Rocky Mountains.

It’s actually quite funny to think that Bree and I grew up 3 miles apart from one another. We went to different high schools but I wanted to go to her’s because they had a better soccer team.

It took just 10 years for our paths to finally cross after I moved back home from Tucson and my hairstylist recommended I see her. For me, I was in awe with immediately.

Needless to say, two years later we became friends; we started going to concerts almost weekly, seeing all the new indie films, playing cards, and drinking wine and all the “cool” beer we could find.

When I found out I was accepted to graduate school in Portland, I wasn’t entirely sure what our fate was, but Bree came. She gave up their 10 year, well-established clientele to start over! That was the defining turning point in our relationship and the concept that there’s nothing we can’t work through truly began.

Typically Bree plans everything for us. She’s detail-oriented and seems to gather a broad knowledge base from her clients. So, when she asked me to figure out where we were going to do our annual backpacking trip for 2018, it would be an understatement to say I was surprised.

Up for the challenge, I dug into researching options and settled on the Olympic National Park (basically, I wanted to see a bear) and I figured it was close to Canada so we had a perfect reason to boat on over after!

Day 1 of backpacking was a bit long and I was pretty sure Bree was going to kill me by the time we got to camp. Day 2 we had planned to hike to a glacier. We started going up but it became clear that it was just simply unsafe for us to do so.

We turned around and on the decent Bree just starts rambling all these really nice things about me and about how much she loves me, all the while I’m staring across the gorge wondering if every hole is a bear cave. In the midst of curiosity and also soaking in all these wonderful things she’s saying about me, she gives me a beautiful wooden box. I instantly realize what’s happening and all I can tell her is, “you tricked me” (we had discussed an engagement for later-but I should have known better). We were both pretty awkward in the moment but it was perfect.

Bree surprised me with an engagement shoot in Victoria BC knowing I would be apprehensive about the idea. It actually was quite a lovely experience and a great prep for all the future photos I, at the time, had no idea I was in for.

The Decision to Elope

The easy answer is that I have an awful relationship with my family and everything to do with that/them would be far too complicated.

We didn’t want anyone else’s emotions, opinions, or whatever else there could be to get in the way of having a day to celebrate Bree and I coming together to create our family. We wanted to be able to share our vows to one another in private and be as open and honest with one another in doing so. And, we wanted to be able to get married in a way that reflected our life and our adventure as honestly as possible.

We’ve known for years that we were going to change our last name together. We finally settled on Pine and knew that the moment we became the Pines (officially) we wanted it to be a moment alone.

I mean, we literally have created our own, brand new, little tribe!

It feels and felt so special at that moment.

When telling my parents, they weren’t too keen on it. My mother told me she would never acknowledge me by Pine. Those words alone were confirmation what we were doing in our elopement plans were perfect for us.

No one in our life knew this was happening, I mean minus parental units I suppose.

We told our friends we were just doing a crazy two week National Park trip through Yellowstone, Tetons, Rocky Mountain, and back home. We decided to elope in Colorado after learning about their self-solemnization law (or the idea that you can marry yourself, no one else needed).

When September 30, 2019, finally arrived there is no word to adequately sum the mixture of emotions we were feeling.

We woke up at 1:30 in the morning to drive from our tiny house AirBnB to meet Amber at the trailhead by 3:00 am.

The experience was incredible; we reached the top at sunrise, quickly changed, and had our first looks. The alpenglow that early and that high was incredible!

I hadn’t seen Bree’s dress and needless to say, I was speechless.

We shared a breakfast picnic, popped champagne, and made the most important promises of our lives to one another.

We spent the afternoon exploring RMNP together then headed back to our off-grid tiny home in the hills above Boulder, CO for our first dance and to cook our first meal as married partners!

To sum up the experience in one word: perfect.

Since we kept the elopement a secret from our friends aka chosen family, we decided we’d host an announcement dinner. We didn’t really have any serious plans for this or details etched out until after we got back from Colorado.

On Halloween, I was in a pretty bad bike accident resulting in a concussion. The next two months I was working from home, on a lot of pain medication watching a lot of Wes Anderson films and I began to spiral with an idea of almost secret society vibes.

Our friends received several packages all with growing detail of the event.

On NYE, we used a burner phone to send them on a bar crawl of sorts until they reached dinner where I gave a short speech, cried, of course, showed our elopement film, and celebrated with the people we love the most.

In the end, I wouldn’t change a thing.

Photography by Adventure Instead

Chrissie & Megan – An Urban Melbourne Wedding on a Budget

Gracie & Jessica – A Proposal That Didn’t Go Quite to Plan

A Romantic and Adventurous Elopement in Colorado