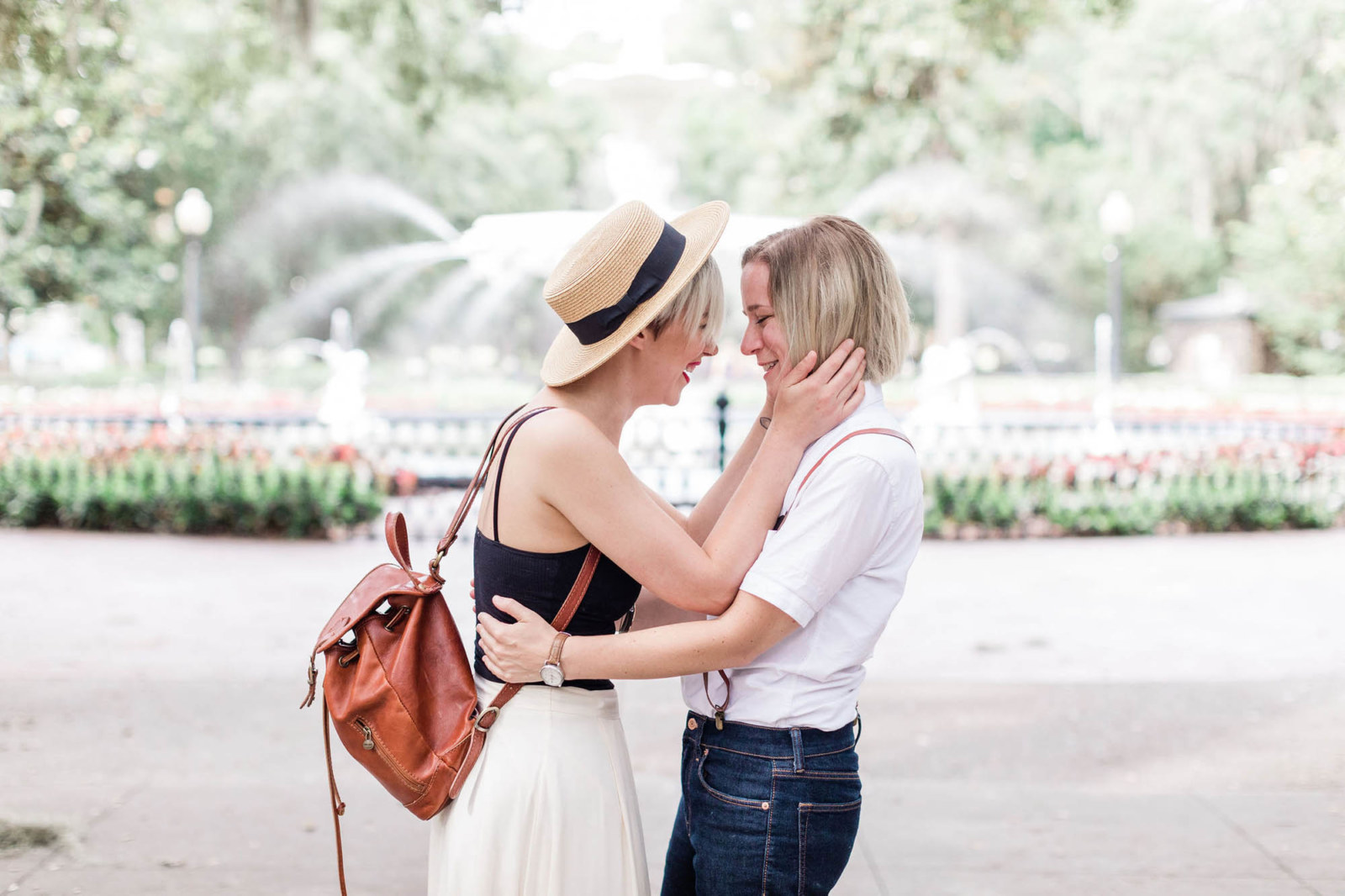 At first, Devin wasn’t interested in Ashley. But, Ashley persisted, and eventually, she’d get the girl that she never quite could get out of her mind. Ashley wanted to propose, but planning a proposal during a global pandemic certainly posed a few more challenges than she was willing to accept!

The story begins 6+ years ago in an LGBTQ bar in Marietta, GA. With the help of some liquid courage, Ashley confidently approached Devin and told her she would absolutely get her number before she left that evening. Devin kindly declined, but that didn’t deter Ashley in the slightest.

Ashley often says that she knew they would be together from the first moment they met and was ready to do whatever it took to land the girl.

After Devin declined, Ashley then proceeded to give Devin her top 3 reasons why she should reconsider (and, for the sake of the future children we will leave those reasons to your imagination).

Even though Devin was impressed by her persistence, the answer still remained no.

It took a few years to admit, but Devin was intrigued from the start. After a few social media messages and casual dates later, they found comfort in the friend zone. Years passed, relationships came and went, but Ashley and Devin always remained close friends. Ashley’s previous girlfriends were not always Devin’s number one fans, which caused some tension and ultimately led to a falling out in their friendship.

A year and a half later, Ashley reached out to reconnect. They picked up right where they left off, and it didn’t take long for Ashley to tell Devin that throughout all these years, she had held onto hope for more.

Needless to say, Devin melted like a popsicle on the 4th of July. Devin was never letting go of Ashley again.

After three years of dating, Ashley started planning to propose. Planning during a pandemic created its own unique challenges. She really wanted to surprise Devin with the proposal and also go somewhere with beautiful natural scenery, and keeping the pandemic in mind, somewhere we could drive to and be outside. After planning and re-planning a few different ideas, Ashley finally found the perfect solution, a Savannah, GA proposal.

She had support from two of our closest friends, who helped them come up with a cover story to get Devin down to Savannah for the surprise proposal.

They got up early the morning of June 6th and headed over to Forsyth Park, it was Devin’s first trip to Savannah, and she was entranced with the scenery. As they were walking toward the fountain for the big moment, Devin kept saying, “wow, this looks like something out of a fairy tale. It’s so beautiful”.

Moments later, Ashley shakily turned to her with tears in her eyes, and yelled, “OMG OMG, it’s happening!”

Devin is pretty sure they blacked out until the moment Ashley said yes.

These two lovers like to think their story will give hope to people everywhere, that with time and a little persistence, you too can leave the friend zone and land the girl.

Mustard & Mauve – Adding Color and Contrast to your Wedding Day