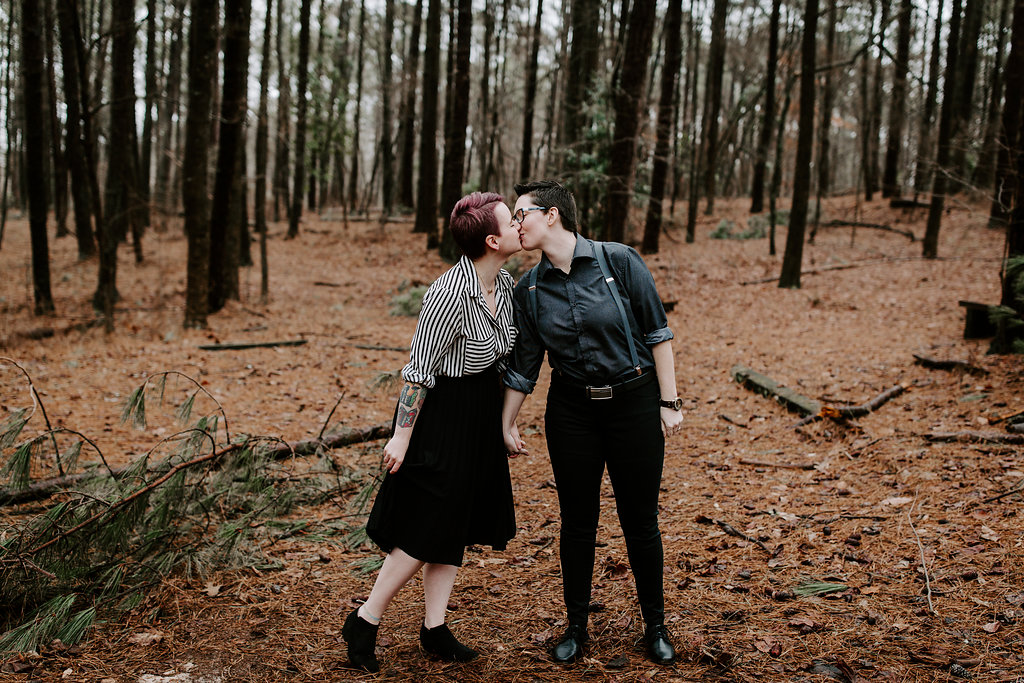 Their love story started when they both swiped right, numerous times. It took seven months of deleting and reinstalling the app, talking on and off before they finally went on their first date. Sydney says it’s because Ashley was intimidating and she was a little afraid of all the tattoos (and the fact that she’s a Slytherin!), but Ashley won her over, and it wasn’t long before the two became inseparable. They share their engagement story with us.

Tell us about how the engagement planning went.

S: I messaged Ashley’s best friend, Kellie, and I got my best friend, Jess, together on a group chat and started planning the whole process. Ashley had ZERO idea. Ashley always expressed that she wanted it to be completely secret, and despite her super good intuition, I pulled it off!

A: Kellie met me that day for lunch. I had a suspicion that that day would be the day but quickly dismissed that as just me being impatient because I knew it had to be any day now. At the end of our lunch, while we were walking to the car Kellie handed me an envelope from Sydney. There was a letter, and it said to meet her in the gardens so we could start the rest of our lives together.

Sydney, was the led up to the engagement stressful?

S: Super stressful! While planning the engagement, I had to lie to Ashley. Lie about when I was working, who I was talking too and everything in between. I wanted to surprise Ashley in a field full of flowers. Like in her favorite scene from the movie Big Fish. So I was in talks with Trader Joe’s, who had to get approval higher up in management so they could place a giant order of sunflowers.

What lead to the destination of the proposal?

A: Sydney proposed to me at the Woodland Gardens. It’s where we had our very first date, so it was an important and special place for us both. She set up all of the sunflowers with the help of her best friends and a lovely older woman who happened to be walking in the gardens and really wanted to help set up! Sydney also had Norah Jones ‘Come Away With Me’ playing while walking up to her. It was the song that we first slow danced to in her living room when we first started dating.

And did you propose with a ring?

A: So, we’ve had multiple rings! I’m really indecisive, and we came across some problems here and there with various rings! Right now, we are both wearing a simple band that has a tree bark design that we found on Etsy. Sydney is obsessed with trees and the outdoors. I’ve always associated that with her and it was important to me that my ring wasn’t just me, but us.

That’s beautiful! What does the engagement mean to you both?

A & S: Our engagement promises each other to always pick one another no matter what. We both knew super early on that we wanted to get married. Neither one of us thought we would find one another so we didn’t want to waste any time waiting.

And have you started any wedding planning?

A & S: We’ve only been engaged since November but don’t want to wait any longer?! We’re actually having a super small, intimate ceremony/elopement. With around ten of our closest friends, one who is actually marrying us, there to celebrate. We’re not talking about it since only the guests know the exact date.

Nearly everything is DIY, or someone we know and love is helping us out. It’s very important for us to keep things simple, but also very ‘us.’ Neither of us can justify spending a tonne of money on every last detail because the most important thing to us is getting married, and the pictures of course!

The wedding will be at Wildwood Park in Marietta. We originally were going to have it at the Gardens since we had our first date there and that’s where she proposed, but it’s not exactly close to our apartment. We took our engagement photos at Wildwood and realized it was the perfect venue for us.