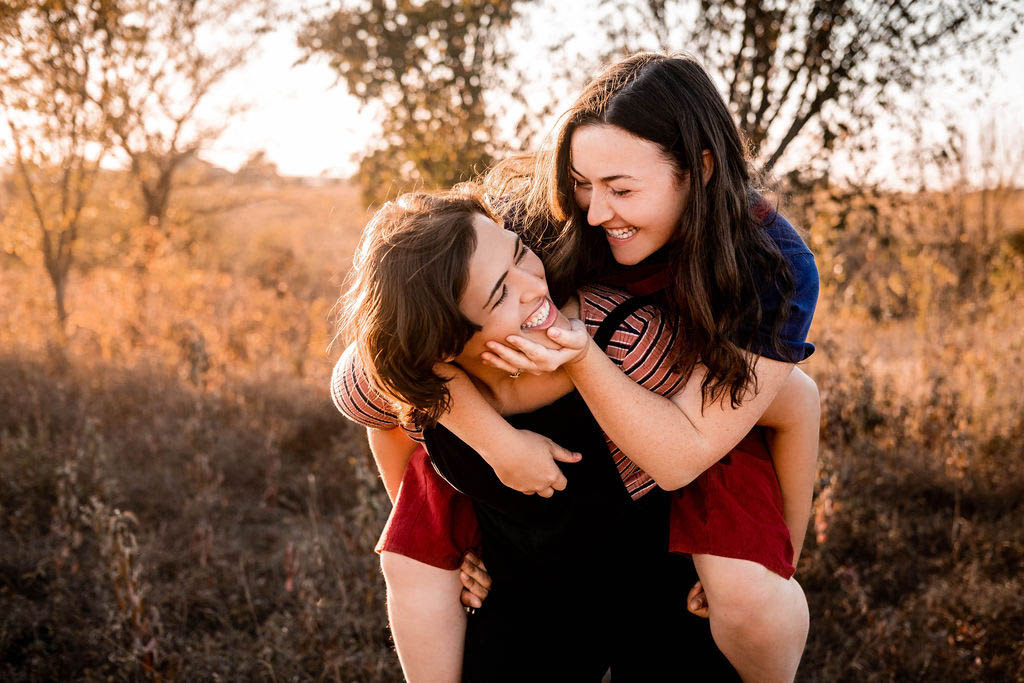 They had two proposals, and each insists that the others were the better one. One proposal with live music playing ‘their song’ the other one after a chess game at the local pumpkin patch.

My partner Jasmine and I met when we were both RA’s at The University of Iowa. In the first week of training, we had to go around the room and share our “identity wheel”. It meant we revealed significant aspects of our identity, and it became clear that we were the only two gay women on our staff. I was attracted to her pretty much instantly, but I was also dating around.

Our first real interaction was when she and another coworker were on rounds. They came by my door (just like they came by everyone’s door) to say hello. We flirted pretty heavily, and she was surprised that I knew her zodiac sign already (Gemini) and that I could guess her Potter house (Slytherin). We got coffee together as coworkers a few times and went to an alpaca farm with a few other friends, but it was still just flirting.

I asked our staff group chat if anyone had soy sauce, and she told me to come to her room. I remember being completely in awe of how bizarre and artistic her room was. I took it upon myself to rummage through her things while she watched and laughed.

We were the only two people on staff duty during winter break who decided to stay in the dorms. We hung out every day—playing chess, cooking together, and going to the bars. She asked me if I wanted to wake up at 3 am on January 31st, 2018, to see the Super Blue Blood Moon with her and watch the lunar eclipse. Obviously, I said yes!

We both had this feeling that something was going to happen.

She brought one sleeping bag and so we “had to” cuddle inside it on the trunk of her car and watch the sky. We asked each other a bunch of personal questions, and we made these questions into a game. We were trying to surprise the other one more, so after a few rounds, I asked, “would it surprise you if I said I wanted to kiss you?” She responded, “would it surprise you if I wanted to kiss you, too?” It was very cheesy but so perfect.

Flash forward to January 31st, 2020. I wanted to make our anniversary special, and I had a nature ring for her (because of her love of camping and hiking). I hired a band to play “our song,” which is “Bette Davis Eyes.” She said, yes! We didn’t make our proposal public because she indicated subtly that she was going to propose back to me pretty soon.

Unfortunately, there was a problem. I didn’t know what it was at the time. And then she had to deploy to Korea since she’s in the army.

I didn’t see her for months. I would have visited, but this was at the height of the pandemic, so we were both stuck. So, we did long-distance.

A couple of weeks after she returned, we went to a pumpkin patch (which is pretty much my favorite place to be). We came across this picnic table that had a chessboard set up, and she asked if I wanted to play. When the game was over, and she accepted her ~defeat~, she asked me to come to her side of the picnic bench. She talked about how much she loved me and how grateful she was to be with me. She spoke about how chess was really important to her because of its significance in our relationship. Before I knew it, she’s down on one knee. She pops the king piece open, and there’s a ring inside.

I was shocked and so, so happy. Of course, I said yes. The reason it took so long (and it wasn’t ready before she left) is because it was custom-made. There’s a little sphere underneath the ring (where the stone is mounted) that symbolizes the full moon we watched together. Apparently, this was her own chessboard and pieces she brought, and she set it up ahead of time while I was distracted playing with some farm animals!!

We both try to insist that the other’s proposal was really better, but hers actually was. It was just a perfect day.