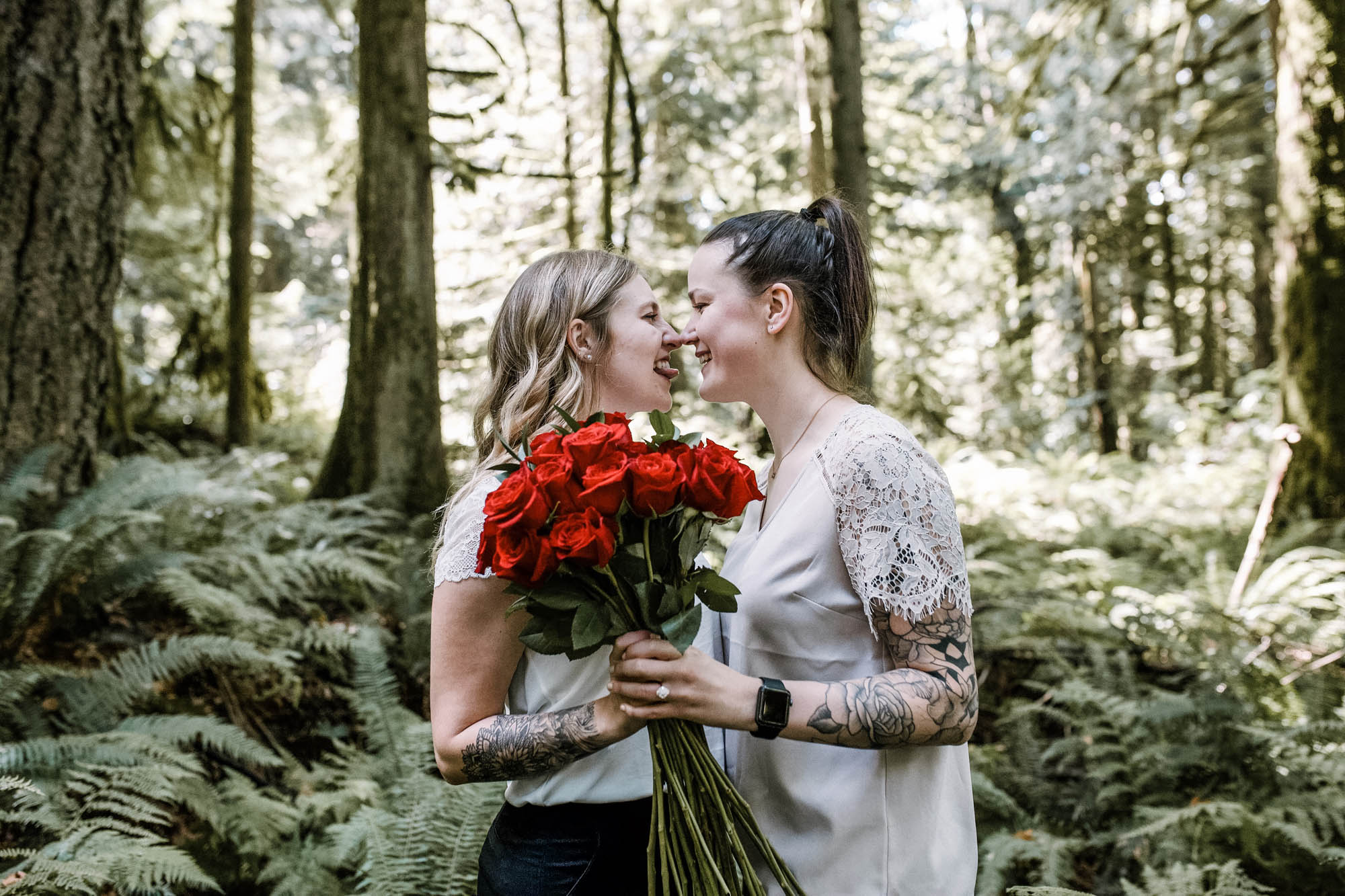 For these two athletes, deciding who would propose first was a competition. Breanne won, and planned a hiking waterfall proposal, with Shayna’s entire family. It swept Shayna up, off her feet.

Shayna and I originally met online before I moved from Ontario, Canada, across the country to her home province of British Columbia. Connecting over our jobs in the sports industry, I eventually found out she got the job I wanted before moving to BC! Needless to say, our competitive natures against each other sparked.

The day after I landed in BC, I met up with her, and we have been inseparable ever since.

She started out as a tour guide who showed me around my new home, but most importantly, she showed me where to find the best fish tacos, donuts, and ice cream in Vancouver – the key to this girls heart. It very quickly became much more than ‘just a tour guide.’

We both showed up on our ‘official’ first date with a bouquet of flowers and got lost even with using a GPS – two of the many reasons I knew she was ‘the one’ that day.

Being grossly competitive, we always play board games, Uno, and card games where the winner ALWAYS gets bragging rights. After talking, we both realized we were deadlocked with proposing. We both wanted to propose first.

So how do we decide who gets to propose first??

Of course, for past athletes, its a competition.

We created a 3-day game tournament where each win was worth a specific number of points with the winner getting to propose first. After three fun-filled days, we came down to a tie with one game remaining. I came out the winner, meaning I now got to plan a proposal before Shayna. A hard pill for her to swallow for her, but the best win I have ever gotten.

Every weekend following, we continued to go on a different adventures. Obsessed with waterfalls, Shayna planned a trip to explore some stops we hadn’t visited. I took this desire for adventure and hiking and planned my proposal to Shay at Bridal Veil Falls in Rosedale BC.

I planned for her cousin to take her for a ‘hike’ while I coordinated her entire family to scatter along the trail she would hiking. The trail ended at Bridal Veil Falls, where I would be waiting.

The proposal day went off without a hitch.

Along the trail, she met up with every member of her family with a rose in their hand following—trail picking everyone up along the way. With tear-filled eyes (also known as ugly tears), she saw me at the bottom of the waterfall and knew exactly what was going to happen.

Surrounded by her family and the team of hikers turned cheerleaders she’d picked up along the way, she said ‘yes’ to forever with me

Mustard & Mauve – Adding Color and Contrast to your Wedding Day