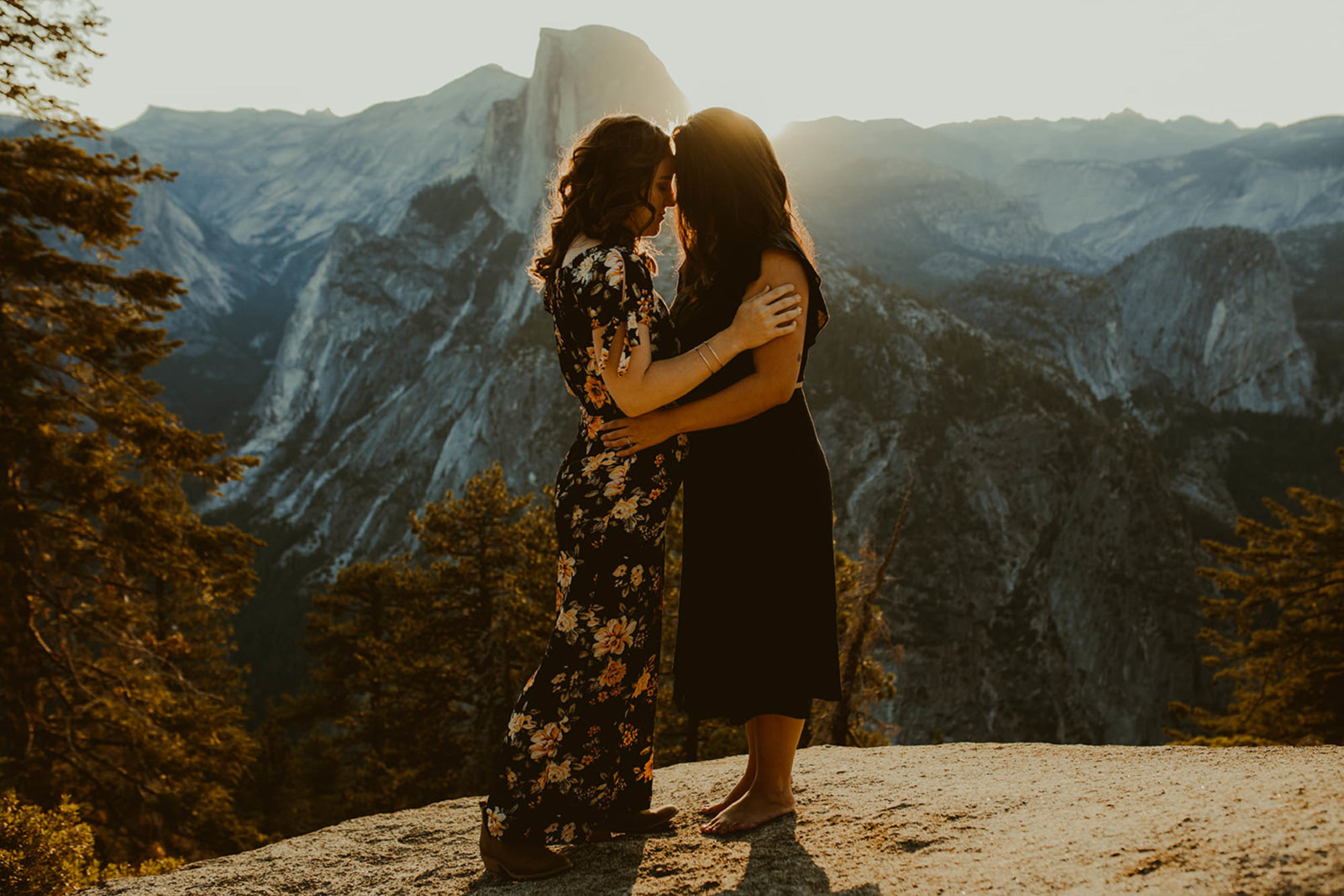 Patty was born in Mexico, Brittney, America. Their cultural differences have been both a challenge in their relationship and one of the best things for them.

P: We both work for Starbucks. My hiring manager and close friend, Lia, transferred out to NY, and when she came back to the Bay Area she took over the location where Brittney was working. I kept hearing how hard of an employee Brittney was and how good she was at her job. One day I went to work in Lia’s store to help out and Brittney could not get rid of me fast enough.

I don’t think she liked me very much.

Fast forward a couple of months and she came into my Starbucks to meet up with a friend. I was the most nervous and could not figure out why. There should be no reason that this girl would be making me so nervous! Obviously, I played it off like the smooth operator I am. But when we met up with Lia for dinner, Brittney jumped up behind me and hugged me. She said she was so excited to see me [I think it was the couple of beers she had before I got there]. But when I turned around to see who it was, my heart just exploded. It was like I was pierced by her gorgeous eyes, and I lost my breath.

Again, I had to play it off, but after that, I did not leave her side.

B: That pretty much sums it up; however, I was not trying to get rid of her in those first months! It was me who was chasing her after that first initial dinner!

P: We’ve done so much! One of our adventures took us to Puerto Rico on a “family” vacation with our closest friends. Two of our friends flew out first. The next day our friend, Matt. Brittney and I were flying out very early in the morning. When we showed up to the airport, we couldn’t check-in for some reason. We went to the help desk and were informed that our flight had been for the day before. We were 24 hours late for our flight! After some panicked “no no no no no señorita,” some negotiating, some more money, we were rebooked on a flight for that afternoon. We said goodbye to Matt, sad that we wouldn’t be flying back together.

Then, we then put our stuff in storage and took a taxi back to Old San Juan. We ended up going to a museum, multiple galleries, and the cathedral. We had an impromptu rum tasting, walked through a farmers market, and purchased our first piece of art together before heading back to the airport.

This day is an example of what our relationship has been; an unexpected [sometimes scary] adventure in foreign territory.

B: Moving into our first apartment together. It was only about eight months into our relationship. Move-in day was crazy. We had left a car in San Ramon [20 minutes away] the day before, because Patty would come to visit me at work. So that morning, we had to pick it up and drop off donations before 10 am. That’s when our appointment was to sign our lease.

Per usual, we were running late. So we were dropping off the donations about 10 minutes before we were supposed to be at the apartment complex.

We missed the appointment, and we were in a bind. By luck, they had another appointment later that afternoon. We only had two hours to get everything moved into the apartment before having to return the rented moving truck. Luckily, everything worked itself out.

That night when everything was in our first apartment, we were hugging in our bedroom. And I remember saying that I loved that moment. Feeling like we were finally home. That story describes our life — a whirlwind of chaos that leads to the most calming best feeling of being home with each other.

What is been the biggest challenge you’ve had to overcome together?

B: Understanding each other’s cultural background and how that has shaped us as individuals. Patty was born in Mexico, and the only Spanish I knew before her was what the little bit I retained from high school.

Not only was I not used to being a part of a huge family, but I was unable to communicate with the most important person to Patty, her Mom. She has had to teach me the intricacies of her Mexican culture. I have had to be open to understanding why they are so important to her. What I’ve learned is that her culture is not just a part of her; it is her. Having my mind opened to a completely new culture has been rewarding.

P: One of the biggest challenges we have faced is understanding each others mental health needs. Brittney has anxiety, and I have lived with depression since I was in high school. Going through life together has meant that we are learning to deal with our mental health together. We have needed to keep open communication in order to understand what the other needs.

There are times when I need to be held and she wants to be left alone or vise-versa.

I think this is one of the reasons our relationship works so well.

Being honest is not just important; it is vital. Talking things out that make us uncomfortable [i.e. triggers, fears, love languages] has brought a level of understanding to our relationship that I did not imagine could exist with another person. That communication is what our trust is based on and because of those two things our love has been able to grow even past the infatuation phase. It makes me feel like we are building something that is long-lasting.

P: The person she is at her core. That is my favorite thing. When everything is stripped away, the insecurities, the second-guessing, the fear of judgement; that’s where the real her lives. At her core, Brittney is strong, intelligent, witty, and loving. After the initial shyness, she is a lover of puns, an admirer of art, and a warrior for the people she cares about. She’s also the best dog-mom I’ve ever met.

B: Her mind. If she wanted, she could use it as a weapon, but she has only ever used it to make me a better person. It is gentle and soft with me and steers me out of the fog I find myself in. It is witty and sharp when we are in a playful banter. Her intense self-awareness allows her to use logic over emotion more times than not. Which some would say is cold, but she has one of the biggest hearts; her mind just controls it. She is one of the smartest people I know, and her intellect is something to be admired.

P: The future holds more adventures! More places to see, people to meet, and things to learn. What I’ve learned with Brittney is that she will create a path for us to reach our goals, and when I switch up our goals, she will rebuild that path, no questions asked. When I offer detours, she will change her footwear accordingly and step off the path with me.

Is there anything else that you would like to add?

B & P: We would love to say a few words of appreciation to our photographers. Megan and Vishnu from Adventure Stories by Us are not only talented but kind-hearted and open.

We are getting married at Villa de Amore, which is a wedding venue in Southern California. A lot of the wedding preparations are included with the venue. Through them, we had our choice of three different photographers. We fell in love with their style immediately. It was so different from the other two. Where the other photographers offered bright colors and perfections, Megan and Vishnu offered a dark contrast and beauty in the imperfections. However, we were hesitant because they did not have any other gay couple featured on their website. We considered going with someone else that was referred to us by another lesbian couple.

During our venue search we actually met a few places that were clearly uncomfortable with having a gay wedding in their location. We quickly realized that we had to get tougher skin if we were going to keep meeting vendors that might not agree with us getting married. So it was a sigh of relief when we sat down with Megan and Vishnu. There was just such a good, welcoming vibe from them. They were honest and said we would be their first lesbian wedding, but that they were excited to take it on. Their excitement for their work shows in the photographs they take. We hope others can see it as well when they see our engagement pictures.

We know our wedding day memories are safe in their hands!

Photography by Adventure Stories By Us

Ciera & Taylar – A Wedding in the Rocky Mountains National Park