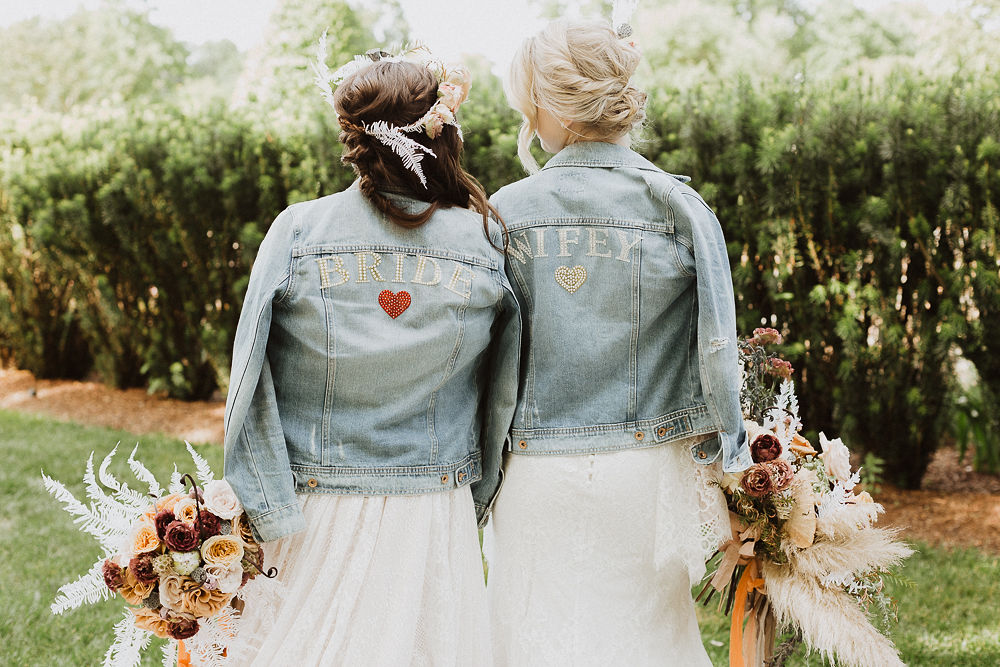 Have you ever dreamt of a magical forest elopement? This intimate and quiet styled edit is the perfect inspiration for brides who bohemian romance meets adventure. During the styled shoot, Brittney and Nicole, who married a few years ago now, re-read their vows to one another. Heartfelt and emotional.

Brittney and Nicole immediately hit it off. Soon coming to learn that they were both moving to Richmond, Virginia, after graduation. The two spent their following summer in Richmond, spending all of their time together.

After three months of Brittney pursuing Nicole with flowers, dinner and movie dates, and every romantic gesture in the book [that Nicole initially mistook for acts of overly generous friendship], the two made their relationship official in September 2013 and have been inseparable ever since.

Their favorite memory together was their proposal. Nicole proposed to Brittney through a scavenger hunt in the city where they fell in love.

Before finding Nicole, Brittney followed clues that led her to important places in her and Nicole’s story. She was met with family or friends at each location and another clue card that brought her one step closer to her final destination.

As Brittney drove to each clue along the way, she listened to a CD that Nicole had made consisting of all their favorite songs. It wasn’t before long that Brittney knew Nicole would be waiting at the end of the scavenger hunt with a ring in hand. Leading Brittney to places like Nicole’s first Richmond home and the waterfront restaurant where they had their first real date. Nicole wanted to add this newest chapter of their story. The only place they’d yet to explore in Richmond, the beautiful Libby Hill Park.

However, it’s not all been smooth sailing.

Six weeks before the wedding, Brittney’s father passed away unexpectedly. During an ordinarily exciting time, the lovers were faced with the sadness that he could not be there to share our joy. They knew Brittney’s father would not want us to grieve him on a day supposed to be a celebration. So we continued the wedding as planned but included numerous gestures that kept his spirit close.

For Brittney, her favorite thing about Nicole is her integrity.

“Nicole is the kind of person that just by spending time with her, it encourages you to be a better person. She is the most honest and understanding person that I have ever met. I admire her sincerity and strong morals.”

For Nicole, it is Brittney’s selfless nature. It didn’t take very long for Nicole to learn that Brittney would give the shirt off of her back to even a stranger.

“Brittney is the type of person to hold open doors and bring food to those without homes. On one occasion has even paid for an Uber ride to take one of her patients home. In addition to being an attractive trait, Brittney’s effortless acts confirmed my beliefs that she’d be a giving wife and future mother.”

A Whimsical Celebration Of Love And Romanticism