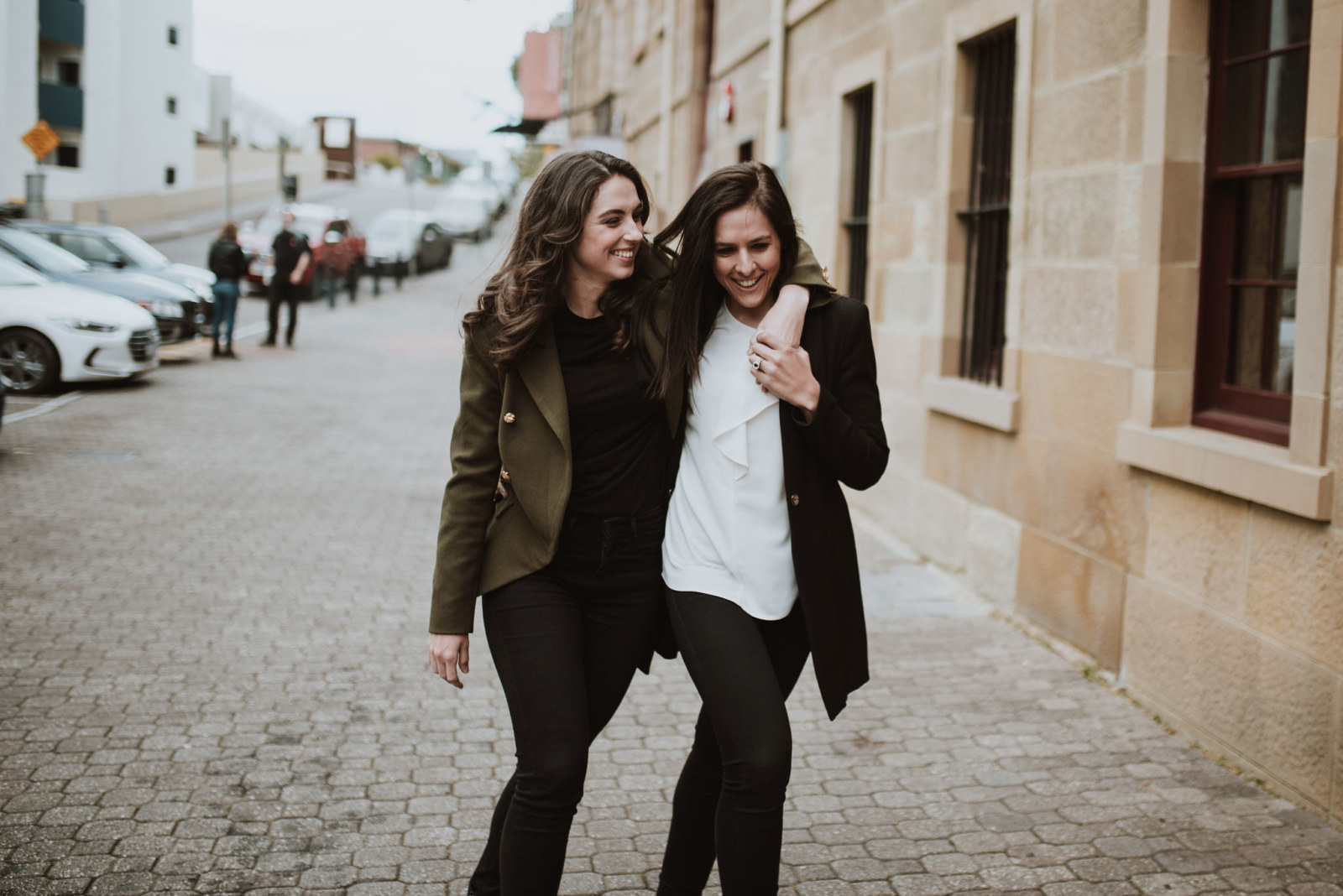 We met on Valentine’s Day in 2018 through a mutual friend, Chloe. Chloe and I have been friends for close to ten years, and we actually used to date brothers [that’s a whole other story]!

Chloe works with Simone and invited a group of girls over to hers for Valentine’s Day last year. We met at Valentine’s Day dinner and just instantly connected. We seemed to have the same aspirations and a similar outlook on life. I had never dated or been interested in women at the time, so I thought we would be friends and how naïve I was.

Simone and I hung out in a group a few times after we met. We had our first, what we call “date non-date.” One Friday night when she invited me out for drinks with her and her work colleagues and none of her work friends showed up. Then, the following Sunday, Simone invited me to her place for wine, and the rest is history! We basically started dating two days later and have never looked back.

We had discussed getting engaged and getting married but never decided on the details of a proposal. Simone always said that she would never propose to me because she was too scared I’d say no. I was adamant that I wasn’t going to propose because I was a “newer” lesbian and terrified of doing it the wrong way. The more we talked about it, the more I realized the actual proposal was more important to her. Having never really thought about, or been excited about, the idea of being proposed to. I concluded that I really loved her and wanted nothing more than to make her happy, and me proposing was the way to do that.

I was nervous about proposing because we had only been dating for about eight months, and I wasn’t sure if it was too early. We had a trip to Hobart planned in November 2018 and a trip to Europe in late 2019. I’m terrible at keeping secrets. So I decided to propose on our trip to Hobart as there was no way I would be able to keep it a secret until we went to Europe!

Enlisting Chloe to help me with rings and planning and Simone’s best friend, Nicole. I invited Simone’s Mum out for dinner the week before we left as I wanted to tell her I was going to propose the next weekend. I was so nervous to tell her, but she was amazing. There were lots of tears, and it was so hard for us both to keep a secret, even just for a week!

We were originally just staying in Hobart for a work conference that Simone had, and we had decided to spend five days there on holidays. However, I wanted to do something more private, so I booked a night away at the Piermont Retreat. Right outside Freycinet National Park. We drove two hours and went for a beautiful hike inside the park, then headed to the retreat. It was so much more beautiful than I could have imagined. The restaurant, the scenery, and the rooms were just stunning. I organized a picnic for us, and we ended up having it in the room because it was quite cold, and that’s when I proposed. After calling everyone to relay the news, we went to the restaurant at the retreat and had a celebratory dinner.

I organized an engagement shoot with a local photographer once we were back in Hobart. It’s not something I would typically do, but I wanted something to remember our time in Hobart. Our photographer, Jon, ended up being lovely, and he wandered around town with us for a couple of hours. The photos turned out amazing, and I’m so happy we have something to remind us of that special time.

Both of our engagement rings are from Canturi. Simone had hinted about the style of ring that she wanted, and when I went researching, Canturi had a ring style that perfectly fit Simone’s description. So I called the store, and they arranged one for me to look at. However, as soon as I saw it, I knew it wasn’t right. I am a bit of a jewelry person, and I wanted Simone’s ring to be absolutely perfect and reflect her style, which is very feminine but also edgy. The ring she wanted just didn’t suit that. So the store manager and I set about trying on probably every single ring that they sell! While I never really wanted a diamond ring for myself, I originally wanted to get a diamond ring for Simone.

In the process of trying everything on, however, the store manager brought out two rings. One was an oval blue sapphire surrounded by diamonds. The second was a beautiful big black sapphire ring with a diamond halo. I knew immediately that the first ring was what I wanted. And the second ring was precisely the style Simone had described to me, just a different, edgier version. I thought the black sapphire was perfect because she always wears black jeans. So I bought both of our rings at the same time! They are both so different, and they really represent our different styles, yet having the same center stone means they complement each other.

Nothing has changed since we got engaged. I think it was really just a way of us expressing how much we mean together and cementing that we do want to spend forever together.

Alex & Candice- a shotgun wedding and stunning shoot in the Utah canyons.