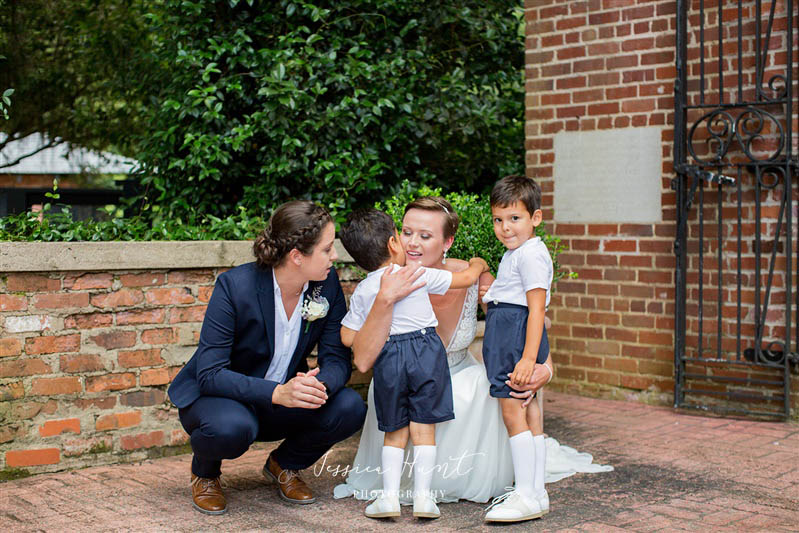 Caitlin and Haley were best friends in high school, and on separate journeys of self-discovering found themselves comfortable in their sexuality. Eventually, they’d end up together. They married in an intimate rustic wedding, in South Carolina with their two children.

Give us a little snippet of your love story.

C & H: We’ve been together a little over nine years, and we got married on our nine-year anniversary.

We met while playing travel basketball in high school. I was going to a different school but moved to the high school Haley was going to in 10th grade. We were actually best friends all throughout high school!

And, you had two proposals.

C: I proposed to Haley first. We had a trip planned to Provincetown and Boston, and I decided I’d propose to Haley on the beach there in Provincetown. I found a photographer and picked a location with plans to do it at sunset. Haley’s favorite place is the beach, and so I felt like this would be the perfect place. I didn’t take into account how cold and windy it would be. It was still beautiful, and we were pretty much the only people on the beach that evening.

Haley proposed to me about three months later. We had a trip to Willmington, North Carolina, planned to do a One Tree Hill tour. We are huge fans of that show and have rewatched it together many times during the last nine years together.

There’s a significant bench in the show on the riverwalk in downtown Wilmington, and Haley found the exact bench and proposed to me on it (cracker jack box and all).

Haley wanted a venue that resembled true Southern charm, complete with water and large trees with Spanish Moss. This location had a beautiful, old Mill and historic brick home with balconies reminiscent of New Orleans and Charleston.

We hadn’t been there prior to choosing it as our venue, but had heard of it.

How did you find your wedding day outfits?

C: Haley went with several of her friends to dress shop. She had picked out a lot of similar dresses to try on, but THE dress ended up being one she saw on a mannequin that her friends talked her into trying on. It was very different than the dress she had imagined herself wearing, but knew it was ‘the one’ when she put it on – her friends agreed.

Mine was a little more complicated. I knew I didn’t want to wear a dress, but really had no clue what I did want to wear. We were back and forth between a white suit and a dark suit, but ultimately went with a navy suit that matched our boy’s outfits. I wore a nice navy suit that I had tailored to fit with a white v-neck blouse and crimson socks with elephants on them.

And the wedding day, was it perfect?

It was a beautiful day! We did our first look with each other fairly early in the day because we also wanted a first look with our two boys. We spent the day getting ready with our closest friends/family.

The ceremony ended up being much smaller than we had envisioned due to Covid, but it ended up being a beautiful, intimate ceremony with our closest friends and family. It was June in South Carolina and outside, so it was very hot, but the afternoon was saved with Prosecco Pops for all (just popsicles for the tiny humans).

The reception was made by Emerald Empire Band. They were great, and we spent the night on the dance floor. And we can’t forget to mention the food provided by Southern Way Catering. They made sure to make us a plate to enjoy after the ceremony and sent us home with leftovers for days.

Have you got some moments that stand out?

C: The first looks with each other, and with our kids will always be a fond memory.

Haley loved the intimacy of our first look together when it was just the photographers and us and getting to share our letters we had written to each other. It felt like the one moment we truly got to spend together with just us.

The first look with the boys was also really special because they hadn’t seen Haley in her dress yet and were so excited.

It was also a really beautiful moment when our oldest son went out to escort Haley down the aisle.

I think my favorite part was when we were introduced onto the dance floor as Dr. and Dr. Tidwell. It just had the moment of “Wow, we’ve finally done it!” When we started our first dance, it started raining, but the sun was still out, creating a beautiful view through the windows in the reception area. If you look closely, you can see the rain behind the band in some of the photos. We’re hoping for the goodluck that comes when it rains on your wedding day!

What does marriage mean to you both now you’ve made it official?

H: Being able to get married and officially be a family. For so many years, I thought my dream of getting married, having a beautiful wedding day, and having my own family would never happen.

Being a lesbian in the deep South, this wasn’t something I thought would ever be possible.

Then here we are, I’m married to my best friend and can kiss her anytime I want (something I wanted to do for so long before I told her I liked her!). We have two amazing little boys who call us Mommy and Mama, and we are the Tidwells. An LGBTQ family living in the deep South surrounded by friends and family who love us as we are.

That has been one of the most beautiful things – being ourselves as a family and being loved by such wonderful people.

Devon & Lexie – A Covid-Wedding in a Barn