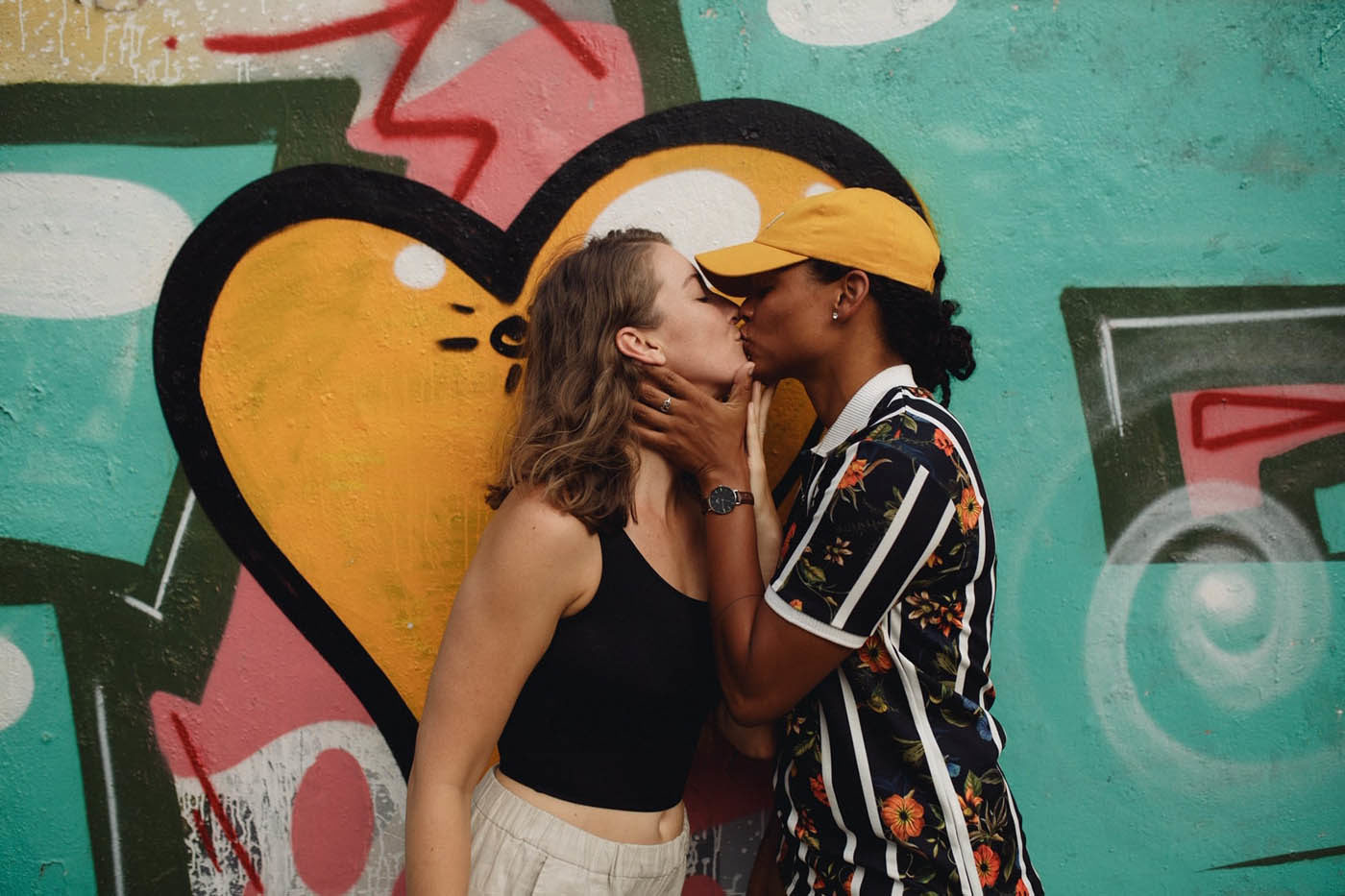 Cassie & Jenaya first met at a Latin dance night in the tiny island of Bermuda. Their love exists in a country where it isn’t always widely accepted, but they’re cautious to remember that their love isn’t a political statement.

C: Bermuda is a tiny island in the middle of the Atlantic with only around sixty-five thousand people living here. You see the same faces in the same places everywhere you go, so it is a rare occasion to see a new face in a crowd. Every Thursday night, a local dive-bar opens their back room for salsa lessons and later a little social dancing.

I have been dancing salsa for quite a few years and had come to see the Latin dancing community as family. I attended religiously, dancing into the wee hours of the morning even though I had work early morning the following day.

One fateful evening, I had a long day and was tired but decided to still make my way to salsa. I invited a friend to join me and soon as I walked into the backroom to dance I noticed an unfamiliar face in the corner. Immediately I was mesmerized, and I am far from a believer in love at first sight.

I went to the bar to order a glass of wine, hoping to calm my nerves. All night I pestered my friend on if I should introduce myself to the stranger in the corner. Each time he answered yes, doubt overcame, and I ordered another drink. By the end of the night, my friend was so sick of me asking about this girl in the corner that he put his foot down, “if you don’t go ask her to dance, I will.” Maybe it was the ultimatum, perhaps it was the wine, but I immediately got up and crossed the floor to where Jenaya was sitting.

“Dance with me,” I said with all the confidence in the world. She looked me up and down, wondering who the hell I was. “I don’t dance.”

Instead of dancing, we spent the night chatting until the last call was made and the lights came on. We exchanged numbers that night, but somehow Jenaya deleted it by morning. She spent the next day googling my name and searching Instagram to find me before sliding into my DM’s to redeem herself.

C & J: Our favorite memory is from this last summer, exploring the wine regions in Lisbon, Portugal. We had found our way into this little hole-in-the-wall restaurant on a side street in busy Lisbon. The line was out the door of locals waiting for a table for dinner. We made our way to the back of the line and were offered a glass of red wine served in an old jar poured from a barrel behind the bar. We made friends with the rest of the hungry crowd waiting in line, getting suggestions on where to eat and drink and explore.

When we were finally seated, elbow to elbow with our fellow patrons, we ordered the best two meals off the menu. We drank label-less wine and filled our bellies with an incredible meal, and our mouths hurt from smiling so hard. Small little moments like these: no wifi, no distractions. These are our favorite moments together.

What has been the biggest challenge you have had to overcome together?

With this political climate surrounding same-sex relationships, it is hard to keep our relationship and our love non-political. Even a simple act, such as holding hands while walking down the street, can feel like we are making a statement.

Remembering that our relationship is just like anyone else’s is important to us. We argue like other couples and we fight just the same. We can let each other down and disappoint one another just like any other couple will. But, we just need to remember that at the end of the day, we have each other no matter what.

Tell us your favorite thing about one another

C: My favorite thing about Jenaya is this little smile she makes when is she tired. Her eyes get heavy, and she starts to get really giddy and laughs at everything I say even when I am not that funny. Her smile takes up her entire face and is so genuine and full of love.

J: My favorite thing about Cassie is that she forces me out of my comfort zone. She gets me to try new things. We are continually exploring new places and trying new things. Before dating her, I never tried wine or sushi or went to half the places we do together now. Although sometimes I don’t want to leave my comfort zone, it is nice to know that we explore new things together.

C & J: Travel! We want to see as much of the world as we can before we settle down and consider marriage and kids. Both of our bucket lists seem to be getting longer and longer. But, we have a built-in travel buddy in each other!

Helen & Julia – A Proposal In Hawaii