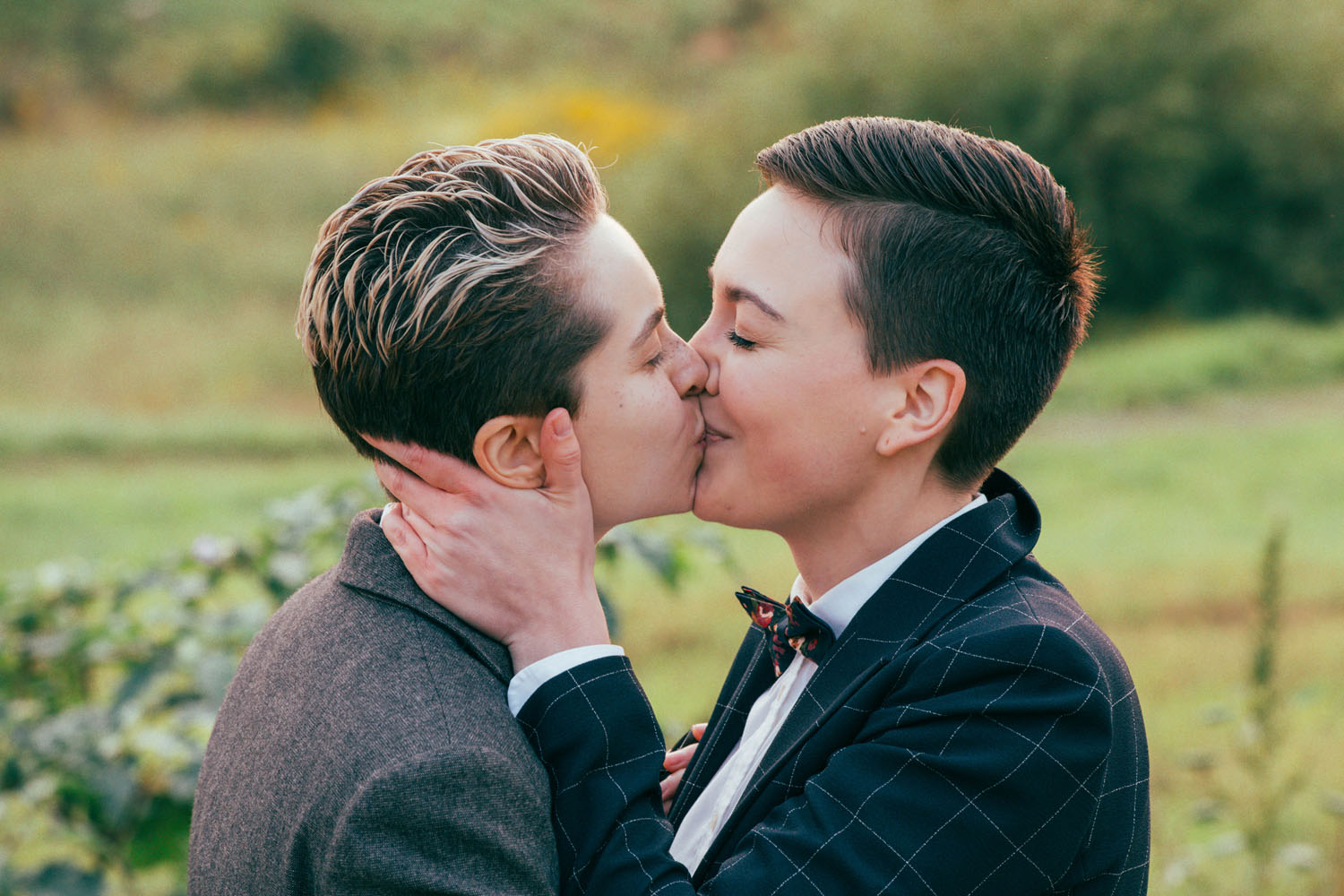 On January 7th 2020, things aligned just right so that Emmaline and I met. I was newly out after being in a serious relationship with a man for over 4 years, and I had sworn off dating after many ups and downs and failed first dates. I was in desperate need of friendship in the LTBTQ+ community after my ex-boyfriend moved out of our apartment with our dog.

Emmaline had just deleted all of her dating apps from her phone and was in the process of making a fresh start after experiencing a lot of emotional hardship and working her way out of a toxic situation in the Fall. My therapist suggested I check out a “Meetup” website to go to fun events with people who have common interests, and that’s how I ended up at a trivia event that night put together by our now mutual friend, Gabriela.

Emmaline was with the group already, and as a classic “attack-lesbian” does, she proceeded to yell across three tables of people to talk to me. By the end of the night, Emmaline had casually made her way over to the seat next to mine, and by the end of the week, we had set up our first date.

Dates lasted entire days, and quickly morphed into entire weekends spent together. After just a couple of weeks of dating, I was fighting the urge to say “I love you,” and my friends were looking at me like I was insane (understandably), but I had never felt a love like this – it filled me with joy but also terrified me. What obstacles would we face? Would our friends and family accept us? Would we be able to hold hands in public without ridicule? Would I be able to kiss her outside of the safety of our home?

Everyone deserves to love and be loved, but unfortunately many still think there are exceptions to that.

Just 5 years ago, we wouldn’t have been legally allowed to marry, and despite that being legal now, the LGBTQ+ community still faces unfathomable discrimination. You can get fired, turned away from churches, denied housing, refused the ability to adopt, and even can have your health care stripped away all on the basis of your gender identity and/or sexual orientation. I was so deeply in love and I wanted to shout it out to the world, but I was terrified.

When mid-March rolled around and we were faced with two weeks of a stay-at-home order due to COVID-19, we were thrilled by the prospect of spending two weeks locked in together. Little did we know, two weeks would turn into 6 months.

However, this was unexpectedly the perfect opportunity for us to bond and lay down a foundation for a long-lasting partnership. In the time we have quarantined together, we said “I love you” for the first time, I came out to my conservative father, we moved in together officially, started planning our future together (including a year in New Zealand and eventually moving to Ireland where we farm our own veggies and have land full of rescued animals, including 5 dogs, 2 cats, 2 fluffy cows, 2 potbelly pigs, and even a horse), and, most recently, got engaged.

Anyone who knows us has said that it seems like we are made for each other and like we have known each other for much longer than we have. We all know what a challenging year 2020 was, but the one bright spot for us through it all has been having each other. She is my rock, and I am hers. I have never felt more in sync with someone, down to the very day we proposed to each other.

Our mutual friend and photographer, Jesse Shussett, was aware that both Emmaline and I were secretly planning on proposing to each other.

Unbeknownst to Emmaline, I was planning on proposing in January on our one-year anniversary and wanted our friend, Jesse, to be there to document it; but Emmaline had another plan.

For my birthday in September, Emmaline decided to disguise a proposal as a photoshoot on a beautiful wildflower farm with the same friend. Jesse texted me the day before the shoot saying they “had an idea.” They told me to bring the ring and propose during the shoot, because it would be the perfect setting and Emmaline would never expect it since the event was my birthday present from her. After a day of panicking and gathering reassurance from family and friends, I brought the ring to the farm with me.

As soon as Emmaline turned to me and said “I have something to ask you,” it all clicked.

Jesse had set this all up so that we were proposing to each other at the exact same time!

We brought out our rings for each other and of course, we both said “YES!”

The photos that Jesse captured perfectly shows our frantic energies during this time – my collar is disheveled and Emmaline is holding the ring box upside down; this is immediately followed by a photo of me holding my ring box out saying “No, I was going to propose”.

I have been so lucky to find the most amazing partner in such an unexpected place and time, and I can’t imagine my life with anyone else at this point. If it weren’t for the suggestion to try out Meet Up, and if it weren’t for Gaby planning a trivia get-together, I likely never would have met my fiancé.

And even if we had met another time, things would have likely been very different.

They say that people come into your lives at exactly the right time, and you find love when you aren’t looking for it, and man did I think that was a load of horse sh*t…but here I am living every cliché.