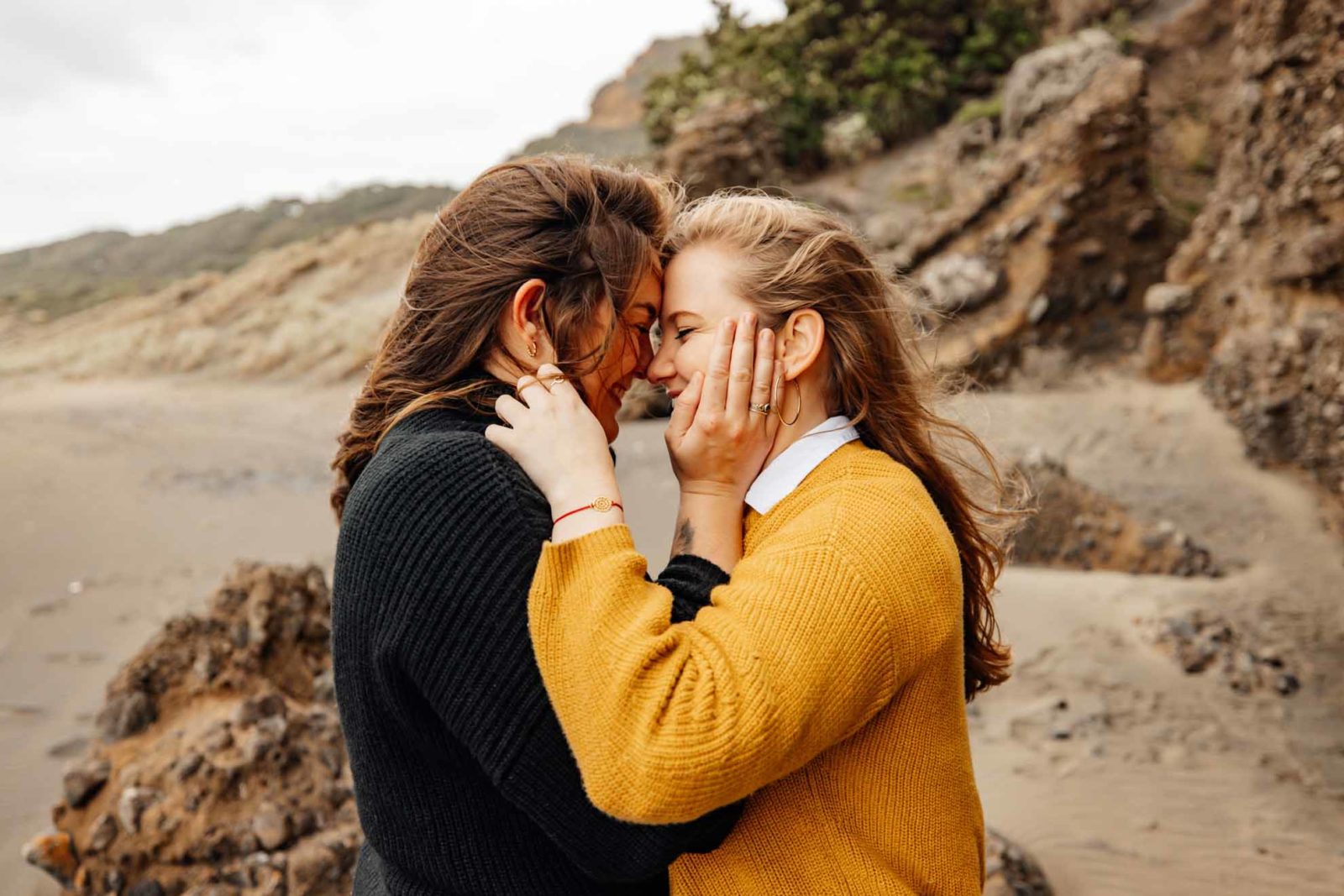 Chelsea and Hayley met in New Zealand after Chelsea made the move from Australia for her dream job. Little did they know that they had found a relationship so special, that no distance could come between.

C: In Dec 2019, I was oﬀered my dream job, I didn’t think twice about relocating from Perth-Auckland for it. On my ﬁrst day in Auckland, I matched with a brunette kiwi girl called Hailey, on Bumble and the connection via messages was instant.

It was pretty apparent that we needed to meet. Two weeks later, we had our ﬁrst date at a bar in the Auckland Viaduct. We sat for hours talking like we had known each other our entire lives. This turned into a three-day date where we spent the whole weekend together. At the time we met, we had both come out of casual ﬂings and were both hanging onto the last thread of hope for ﬁnding real love.

I knew from the second I met Hailey that I would fall really hard from her and that she was diﬀerent from the rest.

H: When I ﬁrst saw Chels on Bumble, her pictures made me suspect that she may be a straight girl who was wanting to experiment with girls. But after talking and getting to know each other online, I realized that we had a lot of things in common. This peaked my interest a lot. So we decided to meet.

At the end of the night on our first date, she made the slick move by telling me to sit closer to her. As I sat next to her, she put her hand on my lap and got closer to me. She made the ﬁrst move and kissed me! I’m not going to lie; I was shocked but pleasantly surprised. Usually, it’s me who makes the ﬁrst move.

C: Over the 2020/21 New Years’ period, at the very last minute, we booked a car and drove down to Rotorua. We spent five days down there and packed in as much as possible. This was the ﬁrst time we had traveled out of Auckland together as most of my time in New Zealand has been spent in lockdown! We had so much fun trying new things together and exploring new places.

My favorite memory from that trip was a natural hot spring creek we visited together. It was called Kerosene Creek, and it was beautiful 30 degree Celsius water. We sat in it for hours in the middle of the forest, and it was just such a special time. The ﬁrst time we went, it was full of people. The next day, we got up super early and ended up having the creek to ourselves for about two-three hours. It was magical, to say the least.

H: When we were still in the early days of dating, Chels brought up the idea of going to an outdoor movie to go and see the new Aladdin movie. I hadn’t been to an outdoor movie before, so I was excited by this idea. We went and bought a picnic rug, a small blanket and some pillows from a store.

Nandos spicy chicken was the dinner choice. This date, in particular, was so memorable because I told Chels we wouldn’t need warm clothes due to it still being summertime. Little did I know it would be absolutely freezing by the time we got halfway through the movie. She will never let me live that down, still a hilarious memory. But secretly, I told her that so that she would snuggle up to me. Smooth right?

C: The biggest challenge we have had to face together is dealing with me being so far away from home, with the uncertainty of knowing when I’ll be okay to return. In May 2020, I had to decide whether to stay in NZ or return to Australia. Due to the border restrictions, if I were to leave New Zealand, I would not be able to re-enter until New Zealand had re-opened its borders to non- NZ Citizens/ Permanent Residents.

One night, while I was on the phone with my mum trying to ﬁgure out whether to stay or go. She said to me, “I’ve never seen so content and happy before. If you come back to Australia, you’re going to be miserable because you’re not with Hailey.” She was right. So I decided to stay.

H: The biggest challenge for me in our relationship has been seeing Chels so distraught at the fact she can’t just go home and visit her friends and family back in Perth. It would leave me so heartbroken because I didn’t know what I could do to help. Helping her try and overcome homesickness was, and still is, very challenging, but it does make me feel better that she feels at home with me.

Tell us the things you love about one another?

C: Hailey’s gentle but adventurous nature ﬁrst drew me to her. She has made me feel comfortable, safe, and loved from the very start and continues to surprise me every day. She is a very open person who rarely ever turns down my ‘crazy ideas, and she makes the most of everything.

I also love her laugh so much. It really does something to me. I always compare it to the laugh canisters they collect at the end of Monster Inc, and her laugh gives me a type of energy I’ve never experienced before. And her chocolate eyes! Long story short… she’s hot AF, and I’m the luckiest girl ever to call her my girlfriend.

H: There are lots of things I love about Chels, her intelligence, her drive, her passions, her ability to make me laugh at pretty much anything, her kind and thoughtful nature, her laugh, her cheekiness, her eyes….. the list could go on. She’s an amazing woman, and I feel so lucky to have her in my life.

C: We are hoping to move to Australia within the next year or so. We both would really love to own our own home together one day. While we are in New Zealand, we hope to see as much as possible and squeeze in as much domestic travel as possible. So far, we have taken one trip, and it has made us super excited and motivated to see and do more.

We are also both very career-focused. So I’m hoping that our move to Australia will also include some awesome jobs for us where we are challenged and able to grow professionally. And eventually, kids!

H: In the future, I hope that we both have good careers. A house (most likely in Australia), marriage, cats, and a little later on, a family. We both are nesters and love being at home. So our biggest goal is to save for a house deposit so we can start that dream.

Gabbie & Kristy – Having the Chance to Propose to Each Other

Maddie & Molly – Planning a Micro Wedding in Less than 3 Months