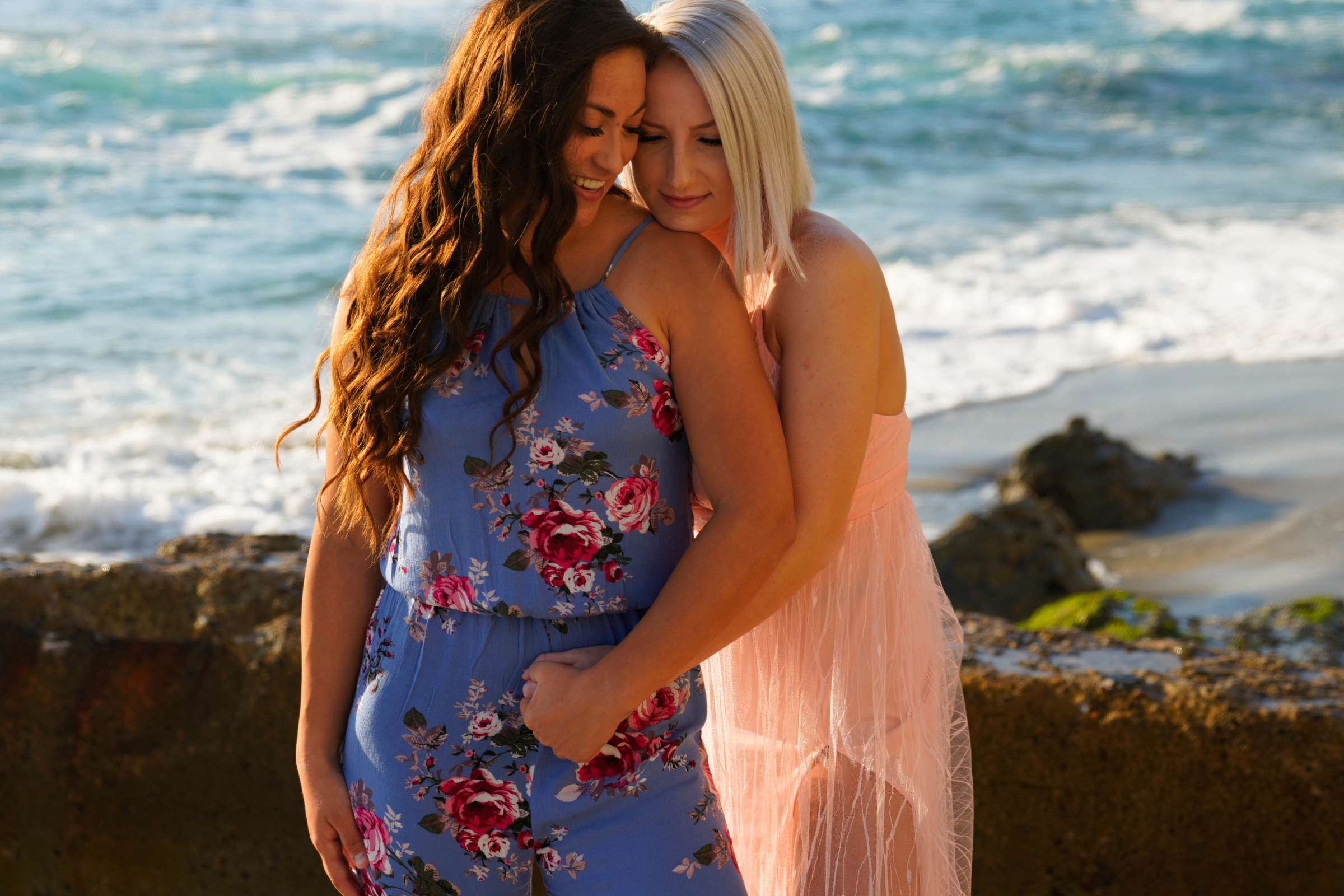 Carmen & Chelsey – A Proposal in a Park

These two lovers knew that they had found something special together, and their relationship moved quickly. They both planned to propose, and each one was perfect.

Your relationship has moved quickly. Tell us about falling in love.

C & M: We have been together for a single year and will be together for a year and half come wedding day! At first, we met on Tinder but didn’t start talking until Chelsea slid into Mel’s Instagram DM’s. We stayed up till all hours of the morning talking for a week straight until we finally had our first date that following Saturday.

…and then you moved in together.

M: Chelsea and I moved in together on our first date! And, a week after meeting and living together, we started looking at rings and talking about getting engaged.

Tell us about your custom-designed engagement rings.

C & M: We were both very picky about the ring we wanted to wear forever, so we decided to go through the process together and have our engagement rings custom made. Although we knew we would be exchanging rings and getting engaged in the near future, we decided that we each wanted to give each other a special proposal and the chance to say ‘yes’ to our forever and that was the part we would make a surprise!

Mel, tell us about your proposal.

M: We were moving across the country from NC to CA right before our first engagement, but I knew I wanted to propose in the city and state that our story began in. We didn’t have much time between when our custom rings arrived and the day we moved so I had to plan quickly. We had to ship all of our belongings except for the small suitcase we would live out of for the week, before the actual move so that our things would be in CA when we arrived.

On the day of my proposal, I told Chelsea that I wanted to take her to a fancy dinner to celebrate the last free night we had together before moving and closing that chapter of our lives. We had talked about starting a journal together to document our love story, so I had one custom made with our initials and anniversary date on it. My plan was to take her to dinner and then to the bookstore, where she would pull the previously placed journal off the shelf and read my handwritten letter telling her that I wanted to spend the rest of my life with her.

Well, not really. Chelsea was taking forever to get ready and at one point even claimed that she didn’t want to go anymore because she hadn’t planned an outfit for a nice dinner and had nothing to wear. This threw off my whole timeline of dinner and bookstore, so I quickly texted my photographer and videographer, letting them know that we were going to be about an hour late. After finally leaving the house, we pulled up to the restaurant to find it caution taped off with an active crime scene in the works. No joke.

Freaking out with time passing way too quickly and a very irritated soon to be fiancee (fingers crossed), I pulled into the next parking lot to figure out our next move. Chelsea, still very on edge, said we should just go home once again, and a small argument broke out to which I had to try to put an end to very quickly. I then decided it would be too late to go to dinner first because the bookstore would be closing, so I texted my photographer and videographer once more to let them know we were going to be heading to the bookstore NOW. Because everything else was going wrong at that moment, why not one more thing, right?

My videographer texted back and said he had run home to grab another lens because I had originally told him he had an extra hour. I stalled for as long as possible; looking for and suggesting new restaurants to go to and after “deciding” on the one right across the street from the bookstore, I “accidentally” missed the turn in and landed in the bookstore parking lot.

“Hey, babe! Since we’re here, why don’t we go look for that journal we’ve been talking about starting!?” Reluctantly, Chelsea agrees, and we head in. As we are walking into the bookstore, the first thing I see is our videographer, a friend of ours who Chelsea would be able to recognize, still fidgeting with the camera angle. Finally, in some luck of mine for the night, he already had the camera rolling and was able to capture our entrance as well as spot us walking in and duck in time, so Chelsea didn’t see him!

Chelsea, you proposed two months later at your engagement shoot – give us the details!

C: We organized a shoot location and met along the trail for our engagement photos. Gala, our photographer, mentioned that she wanted to get photographs of us separately, to which Mel refused because it was our ‘engagement shoot’! She soon realized what was going on and let Gala position us to where I was standing behind her. I pulled out a ‘prop’ and got down on one knee and asked Mel to marry me.

I, too, had organized a journal for the proposal. Knowing that family is everything to us both, I had a note from each of Mel’s parents giving their blessing for us to marry inside, encouraging us on this new chapter we were about to embark on.

On the third page had I wrote a letter reciprocating my love for Mel.

Carmen & Chelsey – A Proposal in a Park