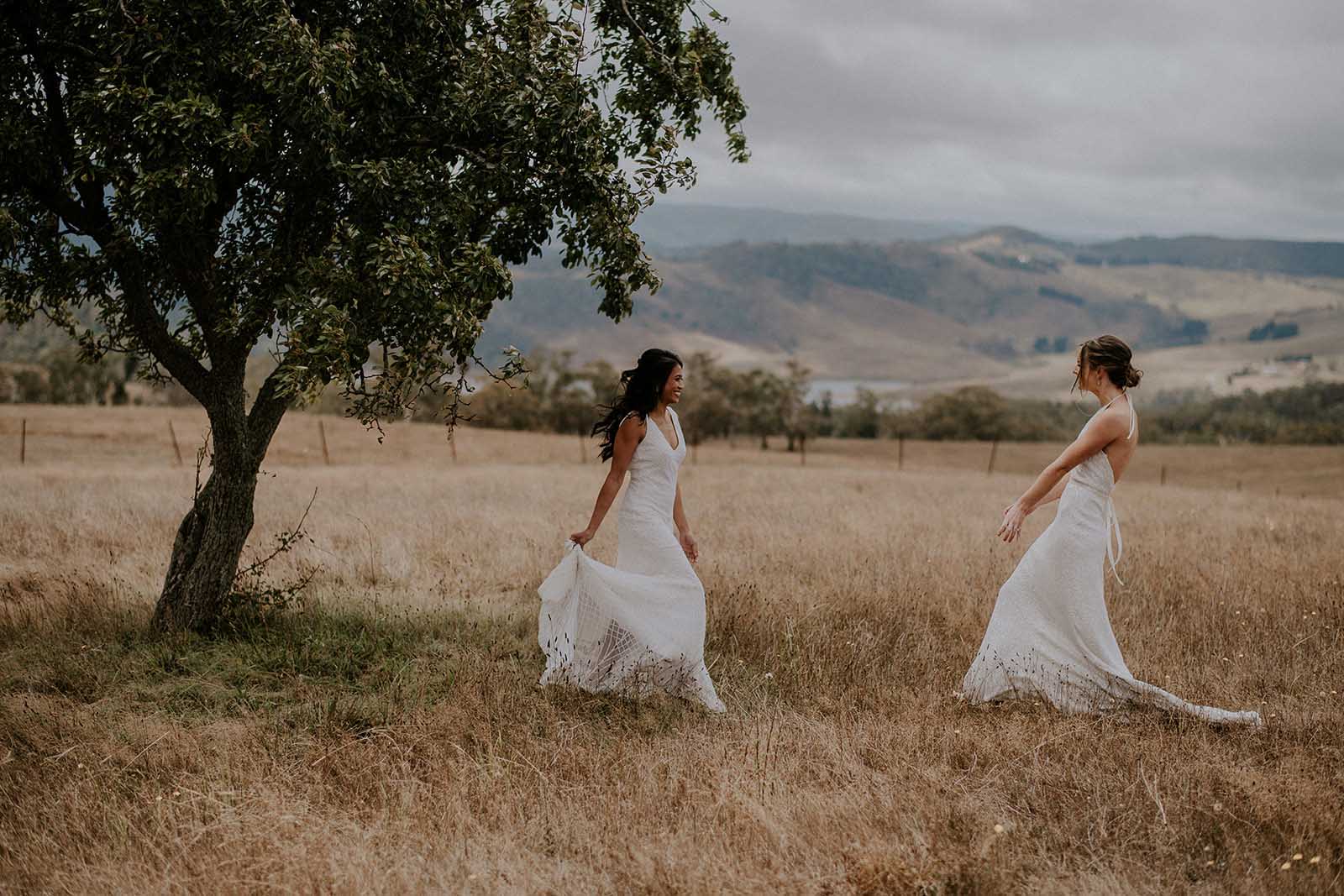 Cherie and Kirsten met at work. Over Friday night drinks, they bonded over their shared love of chicken nuggets and the Pitch Perfect soundtrack.

Their relationship moved very quickly. With Kirsten drunkenly telling Cherie she loved her two weeks after they first got together and no one ever lets her forget it!

There was already an expiration date on their relationship, as three months in, Kirsten was moving to London for work. They said goodbye and “broke up” but then proceeded to call and message each other every day. Finally admitting they were in a long-distance, committed relationship. Cherie tried to transfer to London but instead landed in New York, and Kirsten eventually arrived in the big apple. After eighteen months apart, they were finally living in the same city.

Their first home together was the tiniest little apartment in Soho. Having lived in that space, they realized that they could live anywhere as long as they are together. In New York, just before moving home to Sydney, Kirsten surprised Cherie by proposing in Central Park. She had planned a picnic and made sure they had gone to get their nails done before presenting Cherie with a personalized book with all their quirky sayings and a ring she had very nervously picked out.

Cherie burst into tears and managed to say ‘yes’ between ugly crying.

Cherie then planned a proposal back to Kirsten in front of the Opera house in Sydney. She had arranged for an engagement ring sourced from the same jeweler in New York.

They started looking for venues and were ecstatic when the Australian public voted ‘yes’. Confirming that they could get married in their beloved country. Five days before their fifth anniversary, their wedding took place at Seclusions in the Blue Mountains. An Instagram-worthy venue that had a ceremony space overlooking the mountain range. With a drinks caravan on-site, a pavilion for dinner, a barn for dancing, and plenty of decorations and props from previous weddings. It was perfect for the lawyer and the accountant. They had no skills for any DIY projects.

They agreed not to see each other’s dresses until the planned ‘first look’ on their wedding day. This meant shopping separately with their bridesmaids for the perfect dress. Call it fate, but they independently ended up with luxe gowns designed by Sydney designer Karen Willis Holmes. Fortunately, the bridesmaids were in on the secret and ensured that both brides would not be in the same dress. However, Kirsten and Cherie decided that it would be sweet to have the same wedding band as a symbol of their love and union.

Kirsten and Cherie wanted their wedding to be light-hearted and fun with lots of laughter with their friends and family. It ended up being more significant than they thought. As many guests traveled long distances from the UK, Hong Kong, Denmark, New Zealand, Dubai, New York, Texas, and all over Australia to be with them on their special day. Despite having over 130 in attendance, it still felt like the intimate, fun, and special day they had always wanted.

They did away with many wedding traditions and decided to spend the night before the big day together. They also agreed that it would be more fun for both bridal parties, including the bridesmen, to all be in the same place getting ready before the wedding. After all, their favorite time of day is dancing and singing together in the mornings before work.

Their celebrant, Cara, was greeted as a dear family friend as she had married Kirsten’s sister and her husband eighteen months earlier. The ceremony was filled with lots of laughs and a reading from Justice Kennedy’s majority opinion in Hodges v Obergefell. The landmark civil rights case, where the US Supreme Court ruled that the fundamental right to marry should apply to same-sex couples.

They had a magician during cocktail hour to keep the guests entertained. Their MC started the speeches with a poem written to the theme of Fresh Prince of Bel-Air. All speeches were filled with laughter and heartfelt moments. Including Cherie singing, and rapping a three-song medley with personalized lyrics about the couple.

Instead of a traditional first dance, they changed into letterman jackets with ‘wifey’ on the back and did a choreographed routine to a mash-up of Rihanna and Beyonce. It included Kirsten’s party trick – the worm!

And when it came to the wedding cake, the lovers opted for wedding donuts and a dessert bar. And, of course, had a supper menu with sliders and chicken goujons – a homage to the night they first met.