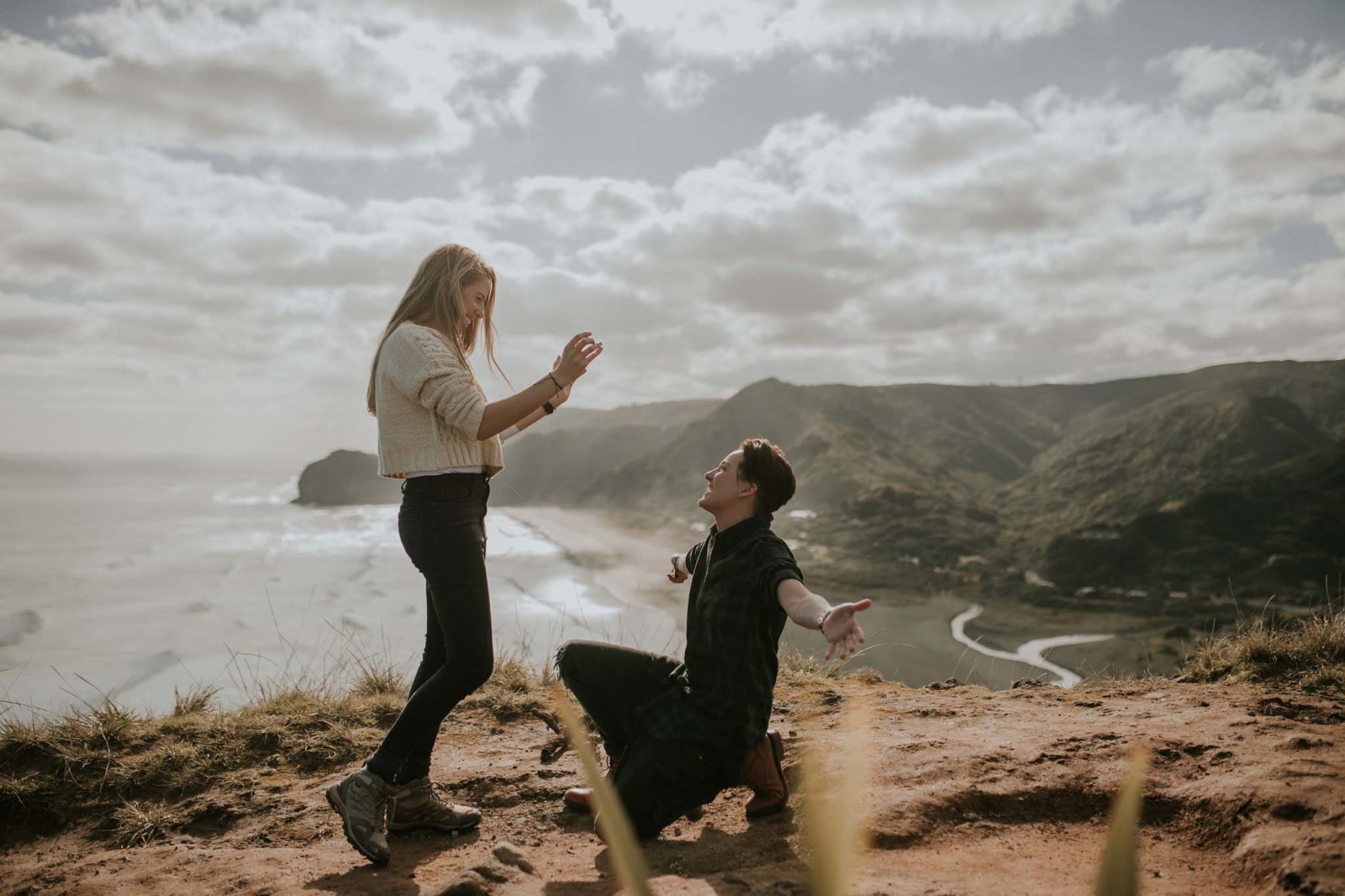 Chey (pronounced ‘shy’) and I recently took a trip to New Zealand with my Mum as a bit of a mid-winter getaway for us all. Little did I know the surprise Chey had in store for me!

It was our second day in the North Island, and we had planned to visit one of the places that had been on our ‘must-see’ for ages, Piha Beach. Chey had been subtlety suggesting she wanted to climb Lion Rock for ages. And a friend of mine, Nina, had advised me I had to walk to the very top of the rock for the photo opportunity. Nina and I are both photographers. I’m not fond of heights much, so I kept telling Chey that I would decide when I saw it. When I saw it, I was like HELL NO.

Lion Rock just so happens to be a sheer cliff, surrounded by jagged rocks and ocean! I told Chey I would go as far as the stairs went and then wait as she climbed to the top.

She somehow convinced me to keep going and climb over the gate that said ‘no entry deaths have occurred.’ Telling me it was only ten minutes to the top. Well, as it turns out, ten minutes was closer to an hour. I got stuck on one precarious rock face for a good fifteen minutes. Bawling my eyes out, shaking like a leaf, and telling Chey how much I hated her (whoops!!). The only thing that kept me going was the thought of Nina doing it and telling myself to stop being a sook!

So, I finally dragged myself to the top, on my hands and knees. When Chey tried to hug me, I pushed her off, and again, I might have mentioned that I hated her. I really don’t know how I still got proposed to! After a couple of minutes calming my heart and taking phone photos. Chey lost patience with me, pulled me to an open space, started proposing, and the next thing I know, a photographer popped out of the bush! The following five minutes were a blur of crying, laughing, forgetting speeches, and a whole lotta love.

It turns out Chey had been planning this for months and been in contact with Amy, our photographer, for over three months to find the perfect location to propose. Amy had even made a video tutorial of the exact spot Chey was to stand. Poor Amy waited two hours for me to get to the top. The last half an hour hiding in a flax bush.

I still don’t have words for when I think about that special day or how much effort Chey went to plan the perfect proposal. Which almost didn’t happen because the ring didn’t arrive until two hours before we flew out of Tasmania!

Oh, and as it turns out, my friend Nina has really never climbed Lion Rock. She just planted the seed in my mind to help out Chey! Sometimes things just all come together perfectly.