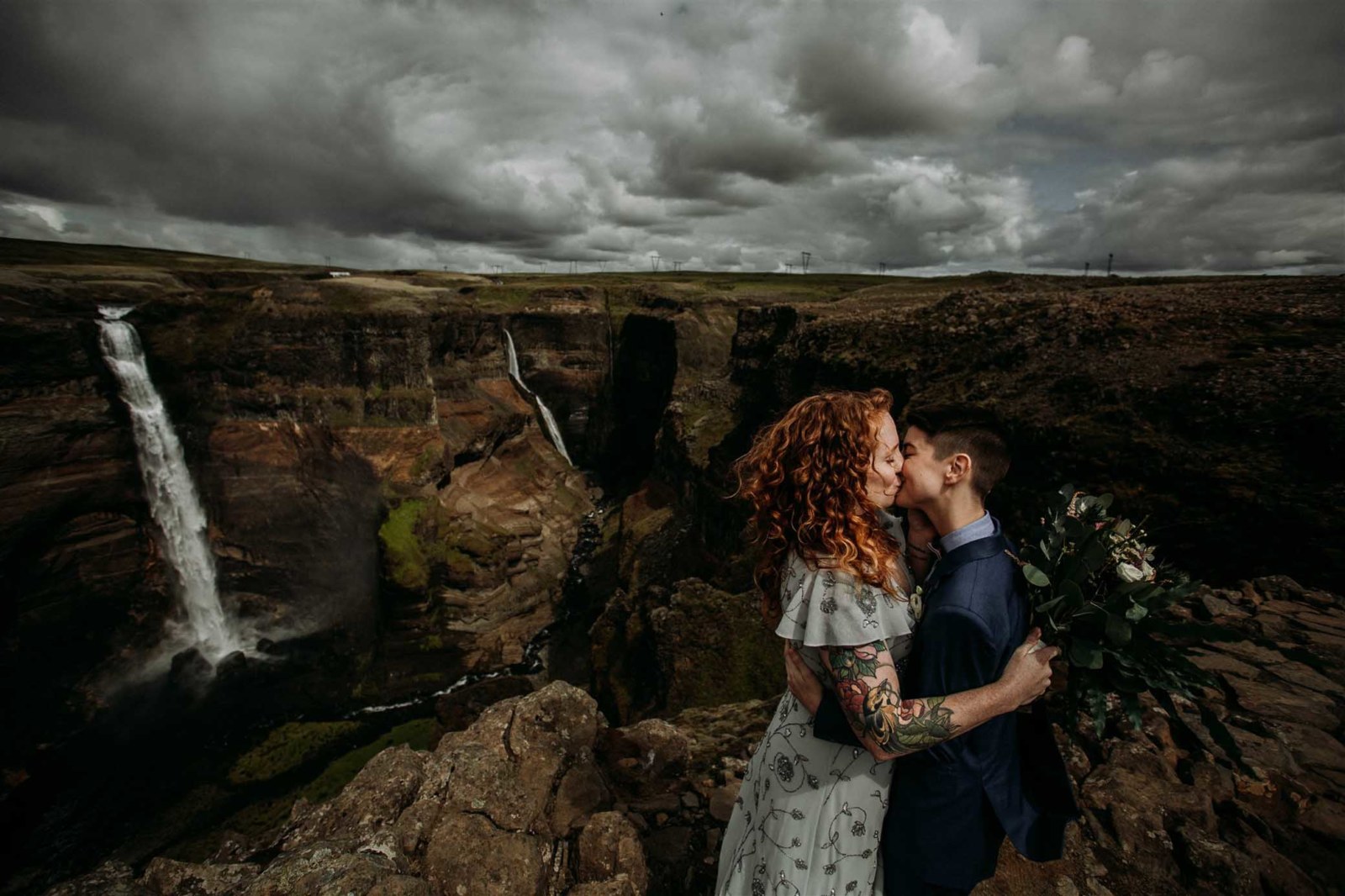 I’m an engineer by day and a roller derby jammer on nights and weekends – derby is my favorite outlet for a physical challenge and competitive environment. It’s also a super badass, womxn focused, DIY, queer sport. Cynthia works at a grocery store and also spends several days a week volunteering at an aquarium. She is both a volunteer aquarist assistant helping take care of the exhibits and volunteering with their marine animal rescue program, where she rehabs sea turtles and seals.

We have been together a little more than five and a half years and met online while Cynthia was finishing college at UMBC, and I was living in Baltimore after college.

There are so many favorite memories together, but a trip we took up to northern PA stands out for the both of us as one we’ll always remember. There is a park up there called Cherry Springs State Park that has the lowest light pollution levels on the Mississippi’s eastern side. We drove up five hours one weekend to spend two nights camping by a lake and gazing at the stars.

To be honest, I was a little wary about the idea of marriage.

After a few events that happened in the summer before our fourth anniversary, I decided to focus on living from a place of love and not a place of fear, which changed everything. Suddenly I would find myself daydreaming about proposing [even once missed an exit off the highway because of it!]. I knew I wanted to propose at home, just the two of us, and ultimately decided to use a card game to do it.

I read a few online blogs and saw the card version of life’s game was a good option; the only problem was that it is no longer in production. I was determined and found it listed as ‘for trade’ on a random board gaming site! I messaged the person on the account and let them know that I didn’t have any games to trade but wanted to buy it off of them. They messaged me back and said I could have it for free! They shipped it from Canada, and I immediately got to work modifying the “get married” card to say, “Cynthia, will you be my person for the rest of my life? I love you”.

I had planned on waiting until our anniversary, but I decided to propose on Cynthia’s birthday. One month before our anniversary and I was SO nervous. Cyn definitely knew something was up, and the game wasn’t even fun! Still, it worked out beautifully, and there were many happy tears.

From the beginning of wedding planning, we knew that we wanted something intimate for just the two of us to share while also starting our married life off on the most epic foot possible. Also, being a queer couple navigating an extremely heteronormative tradition and industry automatically puts us in the “non-traditional” category. We might as well play up to it. This allowed us to really think about how we wanted to celebrate our love as two individuals. And nothing felt more like our love than adventuring together.

Only two people knew about the proposal before it happened. But everyone was so supportive and happy for us when we told them after.

They were all also equally supportive when we told them we were going to Iceland, just the two of us. We are very adventurous and love to travel, so it definitely wasn’t a big surprise.

Steph, our photographer, met us at our epic Airbnb bright and early in the morning. She took pictures of all of our details while we ate a little breakfast.

Getting ready together was one of Cynthia’s favorite parts of the day. She loved being together and helping each other while the excitement we were about to get married was built and built.

Steph drove us around the southern area of Iceland, making several stops to take pictures. We followed a winding road along a river before turning inland onto an F-road towards our final destination.

Once we arrived at Haifoss, we walked from the car down towards the overlook in absolute awe. The waterfalls 122 meters down the two million years old cliff into the narrow gorge below.

After getting set up, we began our private vow ceremony with the water falling behind us. We each recalled the beginning of our relationship and all of the moments that made us fall in love. We continued to vow to dream bigger and always support each other. Danielle recited a few words from the poem A Origin Story by Sarah Kay, and Cynthia included lyrics from I Love You, Always Forever [the Betty Who version, of course] in her vows. The vows ended in tears and will a kiss as we stepped away from the waterfall into our new adventures and wife and wife.

After it was all said and done, we traded in our glass pyramid for a camping van and explored the island for a total of eleven days. Soaking in our new married life while experiencing all of the sights Iceland’s ring road had to offer.

It was everything we could have dreamt of, and then some.