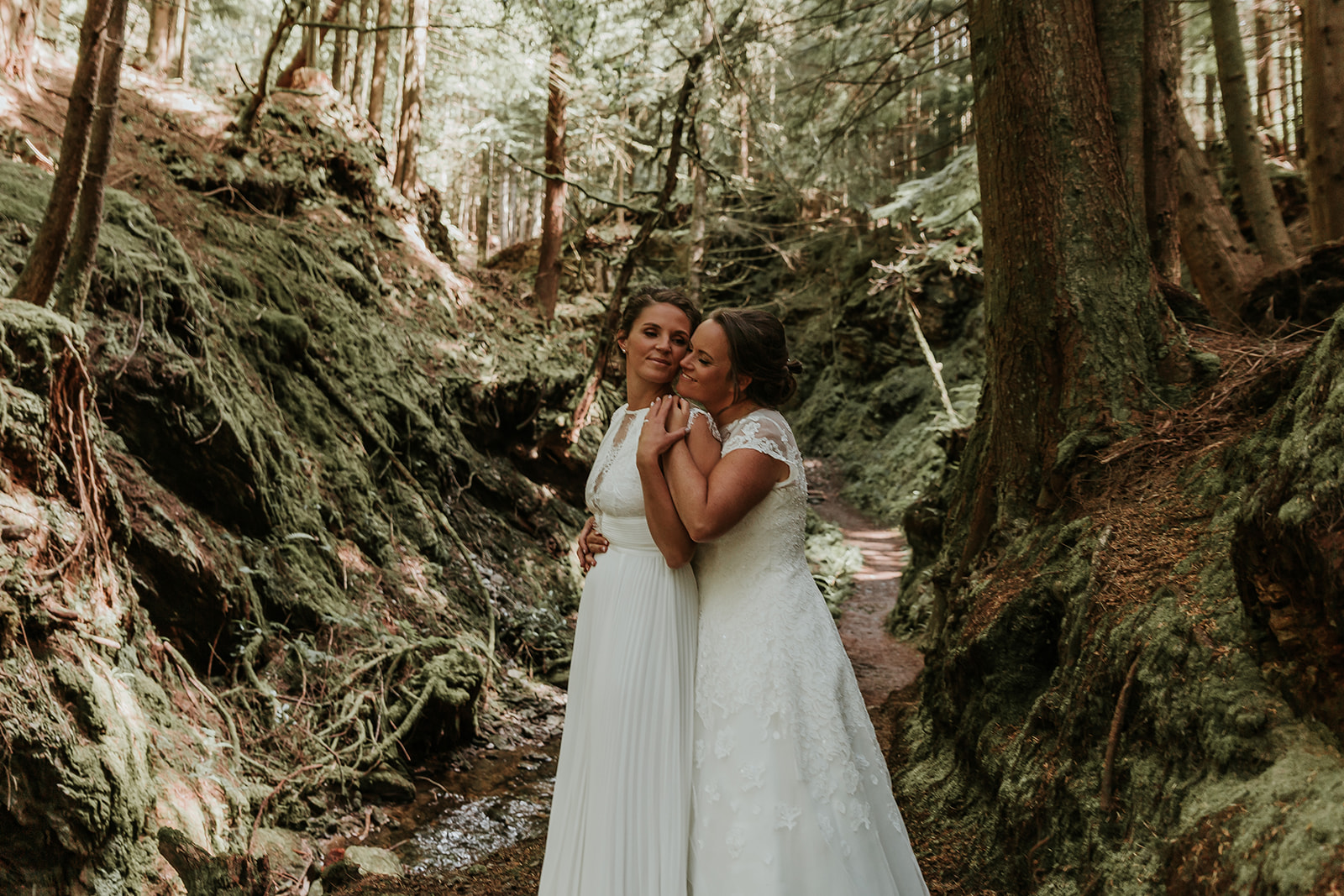 This Hawaiian meets travel meets festival wedding day was a completely DIY affair, brought together at a venue that doesn’t usually accommodate weddings.

Our love story began in 2015, in Wandsworth prison. To confirm, we were prison officers and not inmates. The first time I spoke to Jill, she dazzled me with stories of world travel, and I honestly think I fell in love with her in the first 5 minutes of meeting her.

It’s a shame she didn’t feel the same.

We spent the next year as colleagues and friends until everything changed at a Halloween party. Jill tried to kiss me, and despite wanting to kiss her more than anything I didn’t want to take advantage of her when she had been drinking.

After this night, we spent so long in the ‘will they, won’t they’ stage, both too nervous to make a move. Eventually, I plucked up the courage and texted her saying ‘I wish I had kissed you tonight.’

I threw my phone and broke it. After running to the shop and buying a new phone I was relieved to finally get the text saying ‘I wish you had’…

Plain sailing from here you ask?

When we met, I was aspiring to become a prison governor, whilst Jill was aspiring to travel the world. She didn’t want to go traveling with a partner, so I did the only sensible thing I could think of and cried until she let me come. By the time we went traveling together we had only been together 9 months and I really don’t think either of us expected our relationship would survive 11 months with only each other for company.

We thrived traveling together, diving the great barrier reef in Australia, trekking the Amazon rainforest in Ecuador, hot air ballooning in Myanmar, and a spontaneous flight to the Maldives. Since then, we have not stopped exploring. We’ve been to 25 countries together and own a campervan that we use to take our adventure pup away in whenever we can.

Tell us about your proposal.

We were lucky enough that, during the COVID lockdowns, with only each other for company we thrived. The break in plans and activities made me realize that she really was all I needed in this world, and I could be happy.

In the UK, we were in our second lockdown following Christmas and I decided to book the proposal for April 26th. I wasn’t sure if the world would have opened up by then, but I took a risk, and it paid off because the lockdown lifted on this exact date.

Call it fate, a sign or destiny, I took this to mean that we are two people who are meant to be together.

We packed up our campervan and I told her I was surprising her for our anniversary. We arrived at our hire boat and off we went onto the loch, she was in search of dolphins, I was in search of a wife. I had a backpack full of snacks, prosecco and most importantly a message in a bottle.

Once out of the loch, I sent up my tripod and told her we should take some pictures and we should maybe get out some prosecco, so the pictures look great. She hunted through the backpack, moving the message in the bottle several times until I eventually said – I think that might be a message for you.

She unraveled the scroll and read the poem that ended with ‘Will you marry me?’

I got down on one knee, and she said yes!

Tell us about your wedding day styling.

Our vibe/theme was an Hawaiian-travel meets festival. I’ve always hated getting dressed up for weddings, struggling to find something to wear and then being uncomfortable all day long in the carefully chosen outfit. I wanted to, as much as possible, irradicate this issue for our guests, my thinking was, you have more fun when you are comfortable.

We set a ‘wear what you want policy’, the brighter the better and preferably an outfit you have warn before as we wanted to do our bit for the environment where possible.

I could not recommend this more, the colors looked amazing on the day.

I am from England, and Jill is from Scotland. For this reason, our friends and family have never really met each other so we wanted to create an environment where everyone could mingle and party together. Our wedding had no seating plan and no tables, we asked people to bring their own camp chairs, and this worked perfectly.

By the end of the night everyone was dancing and partying together.

Jill and I love travelling, we spend our lives in other countries or in our campervan for we knew we needed to subtly incorporate this into the day. We had globes dotted around the venue, postcards for the guest book and suitcases for our flower petals.

Your entire wedding was DIY – tell us the details!

Our wedding was completely DIY, and we did all t2he decorating ourselves. I can confirm this is incredibly stressful but rewarding at the same time.

As we wanted to stick with beach/Hawaiian themed, we would spend evenings beach combing to find pieces of wood. Jill is incredibly talented at pyrography, and she was able to make signs for absolutely everything, including our bars.

I absolutely love puns, so these were named “Time flies when you are having rum” and “Let the fun be-gin”. She even managed to create a signpost with all our favorite countries and the distance they were from us in Dunoon, a beautiful reminder of our travels.

As our venue did not have a bar we needed to think outside the box. Jill and her dad assembled bars made up of pallets. These were incredible and meant people could just help themselves to alcohol. We put paddling pools filled with beer and prosecco and mixers next to these bars in paddling pools filled with ice to make sure everyone had exactly the drink they wanted.

I was in charge of wedding favors and I wanted to try and be as eco-friendly as possible. I spent hours making up packets of wild seeds for our guests so that they could ‘let love grow.’

We knew our wedding was going to be a party and everyone would undoubtedly be suffering from a hangover the next day. I made up Scottish-themed hangover kits of all the things that help me when I need to feel better. These included a can of irn bru, crisps, a tunnock’s tea cake, paracetamol and berocca. I brought brown paper lunch bags and made my own labels for them.

During the ceremony, we wanted our guests to take a shot with us, our last before we got married. I brought cork-topped jars and I poured in tequila rose and limoncello for our vegan guests. I can confirm that our guest thought this was an amazing idea and it brought such a fun element to the ceremony.

Flowers, despite being an important part of the day, was something that I believed to be too much money. In stepped Jill’s mum, Christine who said she will attempt to make them herself and wow did she smash it out the park. They went to flower markets at 5am the day before the wedding to pick the flowers that we needed, oranges, whites and greens were included to match the bridesmaid dresses. The evening of the wedding Christine and Jill’s three bridesmaids created the most beautiful bouquets, having only watched one YouTube video!

Tell us more about the wedding day.

The lead-up was incredibly stressful with all the DIY projects. The morning of the wedding was also very, very stressful, the ceremony was at 12:30 and I still wasn’t in my dress at 12:15. HOWEVER, despite this, it was absolutely the best day of our lives.

After walking down, the aisle we did more tequila shots (which we would suffer for later) and then left the party to go and get pictures. Jill had a lot of FOMO (fear of missing out), but despite this, the pictures that we got up at this Scottish glen were breath taking.

Our speeches were done around 3 o’clock when we were drunk enough not to panic but not so drunk that the bestmaid’s speech didn’t embarrass me too much!

We had live music playing outside all day which meant, when the time was right, people could start the dancing. As the wedding was in Scotland there was a rain shower, however the dancing in the rain was fabulous.

At 9 o’clock, Jill’s brother put on a firework display for us and it was quite something and we danced around with sparklers.

We had a DJ for the nighttime, which was fantastic. We’d carefully chosen a 5-hour playlist that meant the dancefloor was full from start to finish.

Let’s take budget, did you stick to it?

We had absolutely no idea what a wedding cost, and we knew we wanted to do ours on a smallish budget, both agreeing we wanted to spend more on our honeymoon.

Up until two weeks before the wedding we were under budget, in fact I remember saying ‘wow we really haven’t spent as much as I thought.’

Then BAM, the panic buying happened, the Hawaiian decorations, the 30 more bottles of prosecco, the 110 sandwiches and the 80 people gazebo incase it rained.