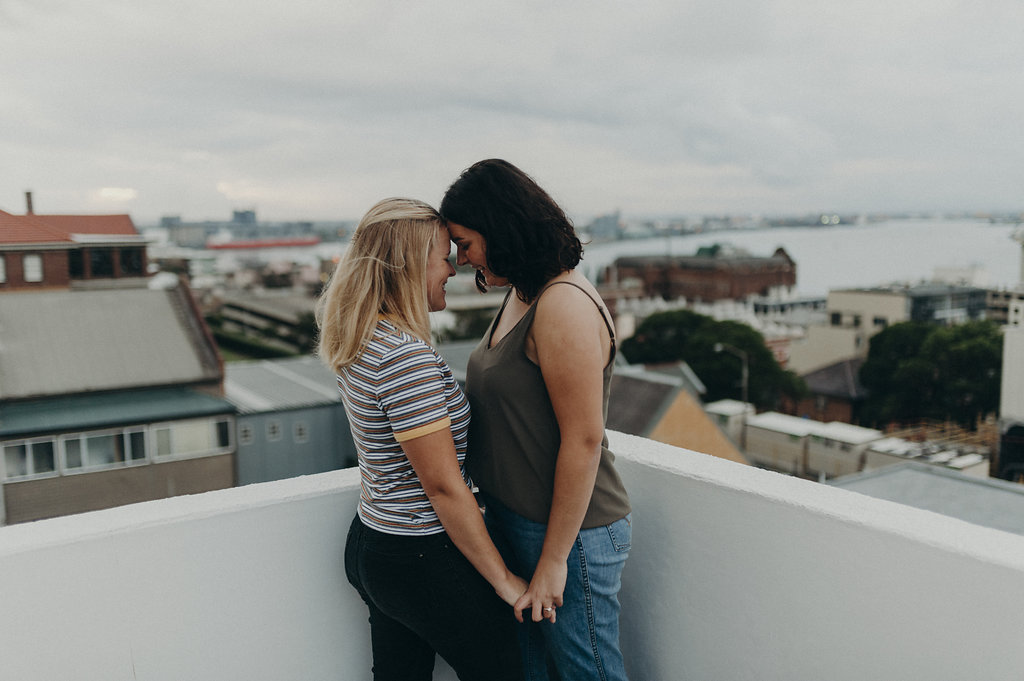 You can read Dom and Emma’s elopement story here too.

Newcastle brides to be, Dom and Emma share their engagement story and how planning an elopement from another country has been.

Dom and Emma met just over three years ago. While Dom was enjoying a coffee at a local café, she had a friendly conversation with the waitress. A few hours later, a friend that also happened to work at the same café asked if she could pass on Dom’s number to the waitress because she wanted to set her up with someone. Dom agreed, and that waitress turned out to be Emma’s sister. That same week they met for a beer, that turned into a long lunch, that turned into a bit of a pub crawl date. They’ve been together ever since.

Early 2017 Dom spent two months designing an engagement ring for Emma. She had planned to pay it off and wait until it felt right to ask. But as soon as it was paid for and in her hands, she couldn’t wait any longer!

Dom asked Emma to get ready for breakfast one morning, and as she was getting ready she waited in the lounge room, on one knee, with her Emma’s favorite band playing in the background. As Emma walked into the lounge, she didn’t even realize what was happening until Dom pulled out the box with the ring in it and asked, ‘will you marry me?’

After much discussion, Dom and Emma decided to elope to New Zealand in February 2018 as Australia didn’t have the marriage equality laws in place to support them at the time. Now, as laws have changed, on their return to Australia, they will have their marriage legally recognized on home soil.

Wedding planning for the pair has been going really well. They’ve chosen an intimate celebration that focuses on just them and their commitment to each other.

Dom and Emma are eloping in Queenstown with just their Mums. Following the elopement, they plan a celebratory party back in Newcastle with all their family and friends.

One of the most challenging parts of planning an elopement at first was telling their friends and family that they wouldn’t be there on the big day. They found everyone to be really understanding. After they let them know there would be a party back in Newcastle on their return!

Planning a wedding in a country has also been challenging. There have been long weekends comparing options online. Finding vendors that suited the couple’s style, that were also in Queenstown and worked within the couple’s budgets. They’ve locked in a celebrant that is taking care of all the legal parts and spoke to multiple photographers who gave recommendations for their wedding trip. Ceremony locations, other vendors, activities, places to eat and drink, everything!

Helen & Julia – A Proposal In Hawaii