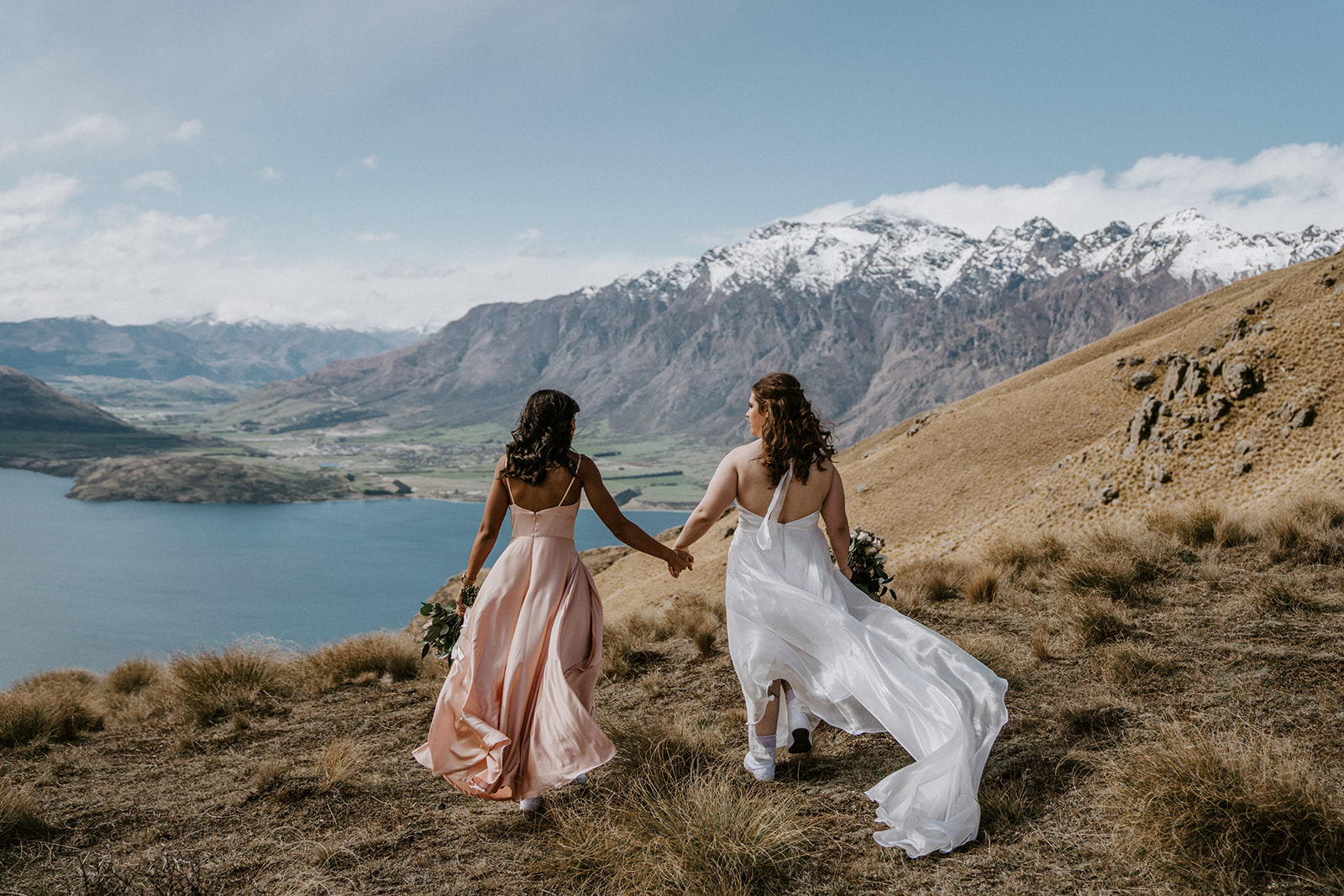 After a Pokemon-inspired proposal, Nicole and Tash took a helicopter to Bayonet Peak, New Zealand and had their dream elopement.

What are some of your favorite moments together?

Some of the highlights were when Nicole made Tash cry with laughter for the first time in the library while we were studying. The times we’ve both miss-read things, constructed things back to front and upside down, and being in fits of laughter together over a silly video or picture that we had taken together.

We went to a nice restaurant in Napier, ‘The Mission,’ for dinner after spending the day playing Pokémon Go in town, catching Larvitars. It was also Tash’s birthday, so we thought it would be an excellent way to finish the day off.

We had a nice dinner, and then when dessert came out, Tash noticed a message written in chocolate “Will you marry me?”.

Tash was absolutely shocked as she had been going on about getting engaged for so long that it was hard to believe it was actually happening!

After a long pause and saying “what” many times, she finally said yes.

Nicole had never seen a woman put a ring on so quickly.

Tash took Nicole out for lunch and gave Nicole a customized Pokémon card, asking her to be her Pokémon training partner for life. Tash then pulled out a Poké ball with Nicole’s ring inside. But of course, Nicole had no choice but to say yes, as Tash had used a master ball that had a 100% catch rate.

Talk us through the decision to elope.

The most important factor in getting married for us was that we both felt comfortable and as less stressed as possible. For this reason, we decided that eloping would be our best option.

Getting married in Queenstown was an easy choice for us as we both think it’s the best place in New Zealand.

Tell us about telling your loved ones that you’re now married.

We told our parents before we got married what our plans were, which they were very supportive of. We enjoyed sharing our wedding photos with our family soon after the wedding, which they enjoyed.

We updated our Facebook status soon after getting married to let everyone know what we had just done!

Talk us through the actual elopement.

We had the most amazing ceremony on Bayonet Peak, Queenstown, on the 7th of October 2021. Since we had bought a wedding package, we worked with our planner to organize everything for the day. She was extremely helpful and ensured we had everything we wanted for the day.

We flew to Queenstown on the 5th of October (after our airline canceled our flights the night before we were due to leave!), where we met our wedding planner and discussed the big day’s plan.

On the day we tried to have something for breakfast – but we were both a bit nervous, so this was hard! Then we got our hair and makeup done and put our dresses on. We had matching white Converse shoes to go with our dresses. Soon after this, we were picked up by our wedding planner and taken to the helipad. Before we knew it, we were off! We flew up in the helicopter to Bayonet Peak, where the ceremony started. We walked to our celebrant together, holding hands. Some beautiful words were exchanged, and before we knew it, we were officially married!

What does the future hold for you both?

We have so much to be excited about! We are currently planning an out-of-region move to Christchurch (where Nicole is from) and starting new jobs to help move our careers forward. We are not planning on having children, only animals, and hopefully owning a house together one day.

Hannah & Madison – Vows Among the Snow in Colorad