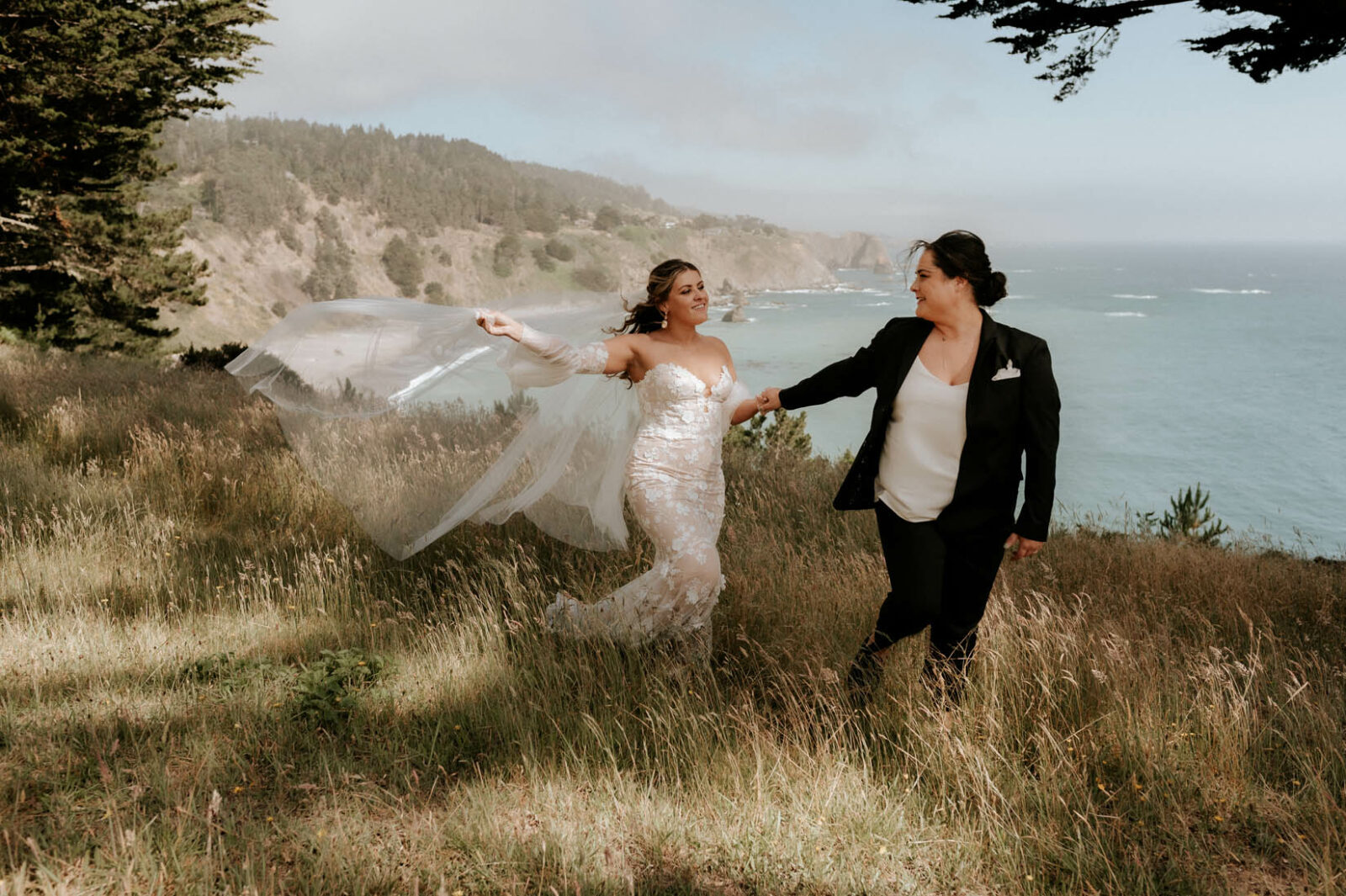 Eloping along the dramatic Mendocino coast of Northern California with their daughter, and Bailey’s mom, and her partner as witnesses. The intentionality and care they put into their elopement day was obvious at each turn.

We make fun a priority! We often wish we had met when we were younger, but this just means we make fun and dating even more intentional.

We find one another to be extremely hilarious and tend to have a good time no matter what we happen to be doing.

We like to get creative in the kitchen (Morgan is excellent at plating delicious and nutritious meals), take advantage of California’s wine country (both by tasting varietals and enjoying the landscape) and plan trips and excursions. Most recently we went to Bali for our honeymoon and took our daughter to Yosemite before summer break ended. As we head into fall, we have a camping trip planned, a cabin in the woods booked and a few off-Broadway shows on the agenda.

How long have you been together, and how did you meet?

We have been together for just under two years. We fell in love in a hopeless place–that odd time during the pandemic between shutdowns and “is this brewery going to stay open or not?”–courtesy of Bumble.

We were so fed up and jaded with dating that we spontaneously said yes to a meet-up the day before Valentine’s Day.

What’s the worst that could happen? No pressure, right?

It wouldn’t lead to anything anyway … or so we told ourselves!

Bailey, what was the transition from being a single mom to a family like? I was a single mom for the entirety of our daughter’s life. Nobody I had dated had ever really made their way into the little life I had created with my kid and our dog, and then Morgan showed up.

I remember how nervous Morgan was the day they met (she even documented her nervousness in a video–she’s extremely sweet and sentimental like that). I busied myself in the kitchen and grinned to myself as the two of them bonded quickly and seamlessly. Our daughter’s face completely lit up with excitement that Morgan brought her a pink soccer ball, and Morgan was so clearly relieved that their meeting happened to go well.

We’ve been making memories together ever since. Each and every one of them is special.

B: I had ruined the plan at least three times that morning. Just know this, I said ‘yes,’ and it was perfect!

On the beach, after a hike, with us wearing beanies…

In addition to the actual proposal, Morgan recorded herself daily in the days leading up to it. She also edited together video snippets that my friends and family had recorded. We’ll be able to look back at these videos for the rest of my days. When I say she’s sweet and sentimental, I sincerely mean it and I love and appreciate it so much.

M: Once I knew she was going to propose, I reached out to some of Bailey’s friends and family and asked them to send in a picture or a video with a sign holding up how many more days left until the proposal. I combined their photos and videos along with daily photos and videos I took of myself counting down the last month until the big day. I even managed to fly to Portland to meet her best friend and buy the ring without her knowing!

Ultimately I made two videos, one that I mentioned and one of us and our daughter highlighting our relationship and the amazing times and adventures we have had.

Then it was time to do the actual proposing.

I thought I had it planned out; on a cliff overlooking the water at a spot called “The Point of No Return,” but a fellow hiker and Bailey’s bladder ruined that plan. I didn’t know what to do or where I was going to do it. While I tried to figure that out I decided we should go for a walk on the rocky beach.

It was there I saw a towering arched rock in the sand and knew this was the spot.

I had all my words planned out, and none of them were said. I fumbled, I was nervous, and I didn’t say all the things I had hoped, but I got on one knee and asked her if she would marry me. She cried, said yes, grabbed me, and we kissed under the arch listening to the crashing waves next to us.

We then celebrated at a local watering hole and made our way back to the house to watch the sunset, popped open a bottle of wine, candles all around us. I showed her the videos I had spent over a month making. She cried, I cried and I felt the happiest I ever have, knowing that our forever started now.

Talk us through the decision to elope

B: Honestly, I never had stereotypical wedding dreams. After witnessing the stress a close friend had experienced while planning and eventually canceling her wedding during the pandemic, an elopement just felt like the most us, logical and economical choice.

M: Part of me fantasized about a big wedding, but after talking to everyone I knew, they all said they would have preferred to elope. I wanted to make sure our wedding day was about us, spending time with our daughter, and having fun as a family.

I am so happy we made this choice, it was the best day ever.

How was the elopement day?

B & M: Once we got over some of the tiny stressful details, and made sure everybody was fed, it was a truly remarkable and beautiful day. To be able to move at your own pace on your wedding day is quite the gift to give yourself!

We just had to work around the sunset and dinner reservations.

The three of us had our hair and makeup done together blasting Taylor Swift and other favorites of the 6 year old. We finished transferring our vows to books in the forest while our photographer and videographer captured the day and the kid twirled in the hallway. We didn’t have a set spot for where we’d exchange vows until it was time to exchange them–we let the sunlight and the breeze be our guides for the day.

We definitely lived up to our Sagittarius potential and kept the adrenaline going…especially when we played with the Pacific Ocean’s freezing cold waves to round out the day.

It was worth all of the sand we had in curious places. A special thanks to our Airbnb hosts for not charging us an additional hot tub cleaning fee after that!

Photography by Dancing With Her Partner Heather K. Purdy

A Romantic and Adventurous Elopement in Colorado