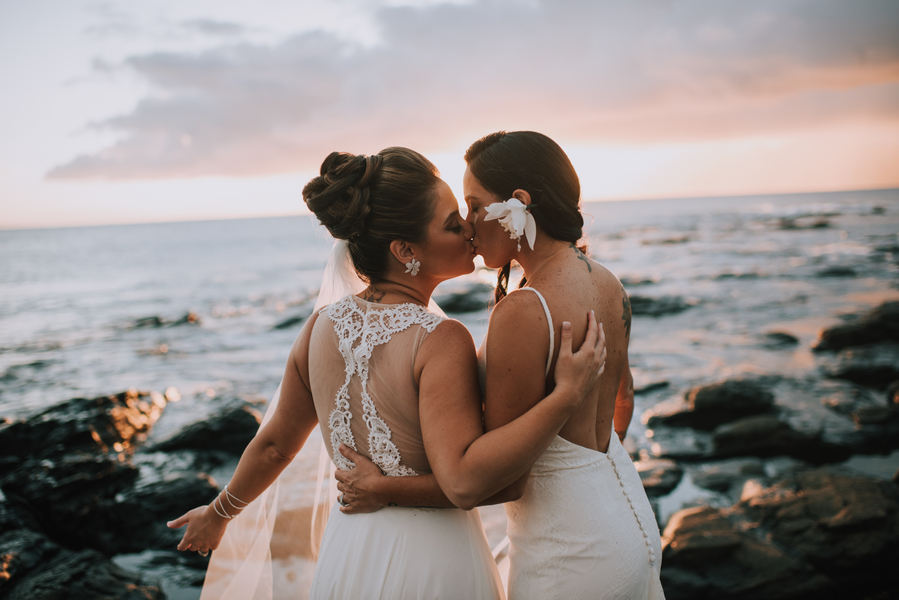 When Erica and Maidel struggled to find a venue in their home state, they opened up their options and fell in love with a cliff overlooking the ocean in Hawaii. They wed in a romantic ceremony that paid homage to Hawaiian traditions with their closest loved ones.

Despite working a block away from one another, having mutual friends, being in the same social circle and Erica knowing Maidel’s sister, their paths never crossed. It wasn’t until, reluctantly, Maidel agreed to accompany a friend to a birthday party and across town. Erica also decided to go with a friend to the same birthday party that Erica and Maidel finally met.

They met and spoke all night, but Maidel had reservations about getting involved as she had recently decided to be on her own for a while and do some soul-searching.

Erica stayed persistent, asking Maidel on multiple dates that we respectfully declined until one night she caught Maidel off guard, and she finally accepted. Their first date was awful, yet wonderful all in the same sentence. The puzzle pieces finally started to fall in place and three months later, Erica and Maidel officially began seeing one another.

Erica proposed first while on vacation in the Bahamas, which took a very nosy Maidel by surprise. In the middle of the Atlantic Ocean, on the very last night of a cruise, Erica got down on one knee in front of their new vacation friends and with Kelly Halloran playing violin in the background and asked, ‘will you marry me?’

A few months later, while traveling through New England, Maidel also proposed to Erica. Sticking to a nautical theme, Maidel had a photographer pose as a tourist under the Lighthouse in Gloucester and captured the moment she got down on one knee.

Erica and Maidel saw fifteen venues in their home state of Florida, and nothing quite felt right. It also became apparent fairly quickly that venues could be quite expensive and, as avid travelers, it wasn’t an option to skimp out on the honeymoon. So, they opened up to a destination wedding, and it didn’t take long to find the perfect venue in Hawaii.

Erica and Maidel undertook quite a few DIY projects for their wedding day. Some turned out well, and others were thrown away. Erica made ribbon wands that adorned the chairs and blew in the wind and a wooden ring box with a tiny gold plated vintage anchor. Erica and Maidel also created a guest book that was a globe, but later realized that it was too expensive to ship and wouldn’t fit in the luggage going over. The things you need to think about when planning a destination wedding day!

For Maidel, buying a dress at Kleinfeld Bridal in New York while on vacation was the best accident ever. While on holiday, she was enjoying the experience of being at the ‘Say Yes to the Dress’ filming location. Before that day she had visited eight stores and hadn’t found anything she really loved.

Since she was young, she had dreamt of walking down the aisle in a similar dress to the one her Godmother wore back in the ’40s. When the consultant asked what dress style Maidel was looking for, she insisted on a long sleeve dress. The consultant brought four long-sleeved dresses and three short sleeve dresses and said, ‘let’s try these on for fun.’

“As I looked in the mirror, I could feel something coming out of my eyes. It was tears. I always said that I would never cry, like other women on the show, when I found ‘the’ dress because I was just not the type of person to cry over fabric. As I stared at myself alone in that small room and swirled, I knew that I’d been trying on the wrong dresses all along. When I composed myself, I stepped out with a big smile on my face. The consultant said, ‘is this your dress?’ and I started crying. It was a scene right out of Cinderella as they brought me shoes, a sash and a veil.”

For Erica, it was extra easy. She pinned a dress on Pinterest and asked a friend who owns a bridal store to find it for her. She did, and it fit like a glove.

The venue provided Erica and Maidel a list of amazing vendors to choose from, and Etsy was a world of inspiration. It made anything the pair envisioned possible.

Their photographer, Emily, was a recommendation by Maidel’s sister and after looking at her portfolio online and speaking to her, they had an excellent feeling and booked her. The guests were swooning over how wonderful Emily was, fitting in more like a guest than a photographer.

Besides an unforeseen strong wind in the evening, everything was perfect. As soon as the ceremony started, the winds died down and it was picture perfect. There was even a good luck sprinkle of rain during the ceremony that lasted about fifteen seconds and then rewarded the newlyweds with a beautiful rainbow.

“Merriman (Venue) did a really amazing job, and all the vendors over exceeded our expectations. Our musician was out-of-this-world talented. We designed our cake on Word by pasting and cutting different images from various cakes. The bakery somehow brought it to life identically to what we had requested. Our officiant Reverend Joe Miles was like being married by an old friend. He made our ceremony something that you read in storybooks. Everyone involved in our special day blessed the day with their very best work.”

Maidel’s Father passed before the wedding day, and it was important that they found a way to honor him and all the family that couldn’t make it. Erica and Maidel organized to have a special Bell Ceremony. The specific bell used was one that Dad had used while he was in Hospice Care at home. They rang it once for every person that they wanted to honor in spirit.

Erica and Maidel also incorporated many Hawaiian traditions to pay homage to the Hawaiian and Polynesian Gods and Ancestors. Thanking them for allowing them to have their beautiful wedding on their land. They held a traditional ceremonial blowing of the conch shell, a lei ceremony, and had a Hawaiian blessing said at the end.

Advice to Other Couples

Erica and Maidel are forever thankful that their best friend convinced them to book a videographer. It was a last-minute vendor pick, just three months before the wedding day. It captured the moment and the feeling that was otherwise not captured in still photography.