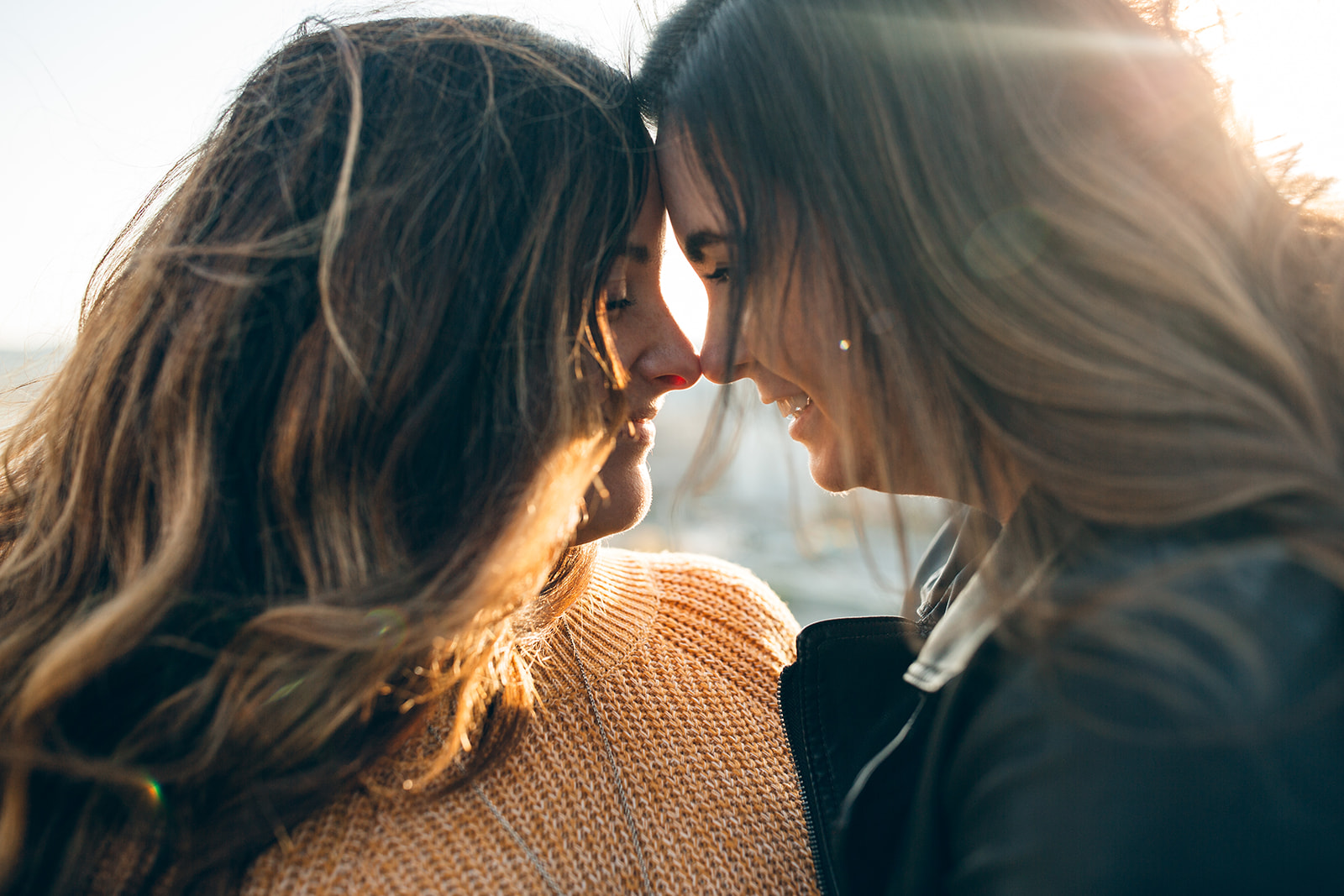 We’ve been together since February of 2017. We met on the HER app, which is a lesbian dating app. We both weren’t having much luck until we matched, and I sent her a cheesy pickup line saying, “You’re gorgeous!” After that, she was hooked, and we talked for hours every day. We met on a rainy, cold afternoon on a Sunday at a cute little coffee shop.

We had both discussed wanting to be married in the near future. With our San Francisco trip coming up in a few months, I knew that would be the perfect location since Michelle is obsessed with Full House. She was on a work trip one night, and I stayed up until 5 am researching diamonds and settings to create her ring online.

She had mentioned to me multiple times that it’s all about the diamond, so I knew I wanted to focus on that aspect most. We both got our rings from Blue Nile online and couldn’t be happier with the diamonds’ quality.
When I snuck downstairs to pick up the ring from our apartment receptionist, I didn’t think anything of it, and Michelle thought I was heading to the bank. Well, Michelle later went downstairs to get a package, and the receptionist mentioned that she had seen me earlier that day picking something up! Michelle was instantly curious as to what I was picking up. It’s hard to be sneaky when you live together and work from home together for some days! I told her it was a secret and tried to blow it off, but she kept bringing it up for weeks and weeks before our trip trying to figure it out.

Also, right before the proposal, we were grabbing a casual beer beginning our vacation. I must have been acting strange because Michelle asked me why I was acting so weird. Nerves are crazy!

I had visited San Francisco twice before and fell in love with the city. Michelle had never been, but I knew she would love it. I had initially planned to do it on the hill in Alamo Square Park, where the intro to Full House was filmed, but we ended up on a beautiful dog beach underneath the Golden Gate Bridge, and it just felt so right and so “us.” As soon as we stepped foot into the sand, Michelle said, “This would be the perfect place to propose!”. I almost didn’t do it after she said this! I kept my cool and let her take pictures and videos as I fumbled, trying to get the ring out. She turned around, and I was down on one knee and asked her to marry me. She was shocked. I genuinely caught her off guard. After lots of “what! What! Are you serious?”, crying and laughing, she said yes. It was so perfect.

Being engaged to us means we are all in 110%. It means that our love is eternal, kisses are endless, and that we’ve each found our forever person. Nothing much has changed; we are just enjoying life in general.

So far, wedding planning is going well. We’ve started researching locations to have a 2020 elopement. We want it to be a destination elopement with just the two of us. The most important part about our wedding is that we are making all the decisions for us and no one else. We envision a beach wedding, ukulele playing in the background, and flowers galore. Magical and simple.

We will choose a wedding planning service that handles all the vendors for us and is included in the package. We want a videographer there so that we can have a reception later on back home with friends and family to play video footage of the ceremony highlights. Most of our process of choosing vendors will be online, reading reviews, and chatting with them over the phone since it’s a destination wedding.

Ashley & Jen – Finding Love at Church and a Zoom Wedding

Fran & Lynnea – A Proposal on Stage at the Kennedy Centre