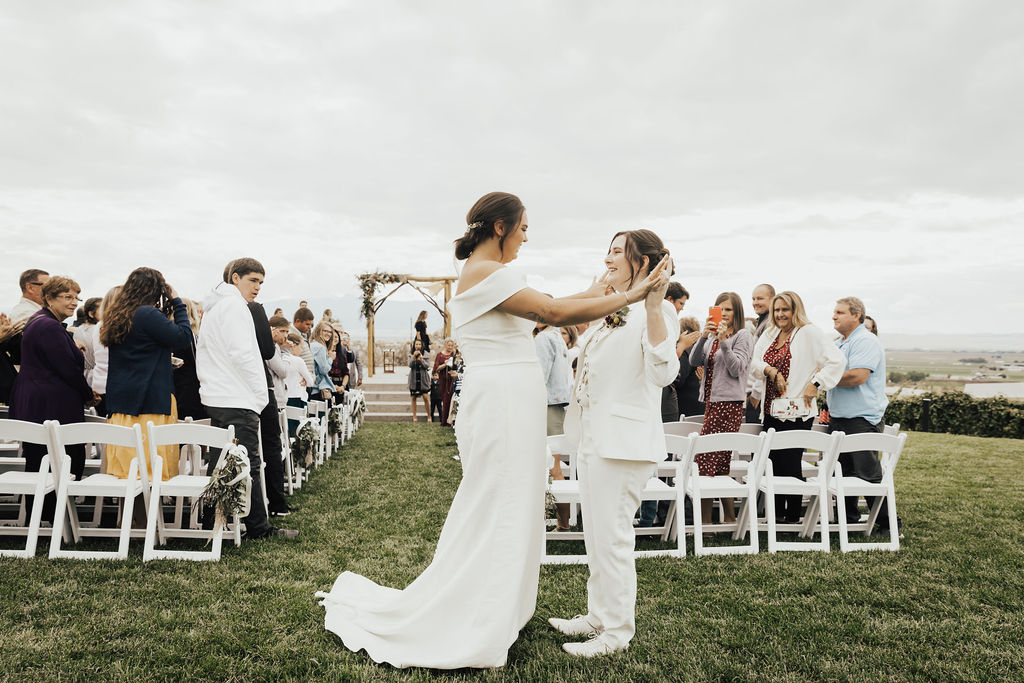 Erin and Rowen married in an eclectic and bright, but still sophisticated Utah wedding. Under a chuppah, they said their vows and partied into the night as newlyweds.

Give us a little insight into the love tale behind you two.

We have been together for almost three years now, married for seven months, and met in February 2017 through mutual friends.

We had a close girl group of about seven girls. Rowan and I were dating other people when we met, so we started off with a solid friendship before considering dating one another. We ended up falling fast and hard for each other after spending a lot of time together at the Pride Festival in Salt Lake City in June 2017.

Rowan asked me to be her girlfriend in July. We spent every second together until Rowan left Utah to go to grad school in Florida in August 2017. In October of the same year, I packed up my life in Utah and drove to Florida to be with her.

And although Rowan wanted to surprise you with a proposal, you knew what was going on, didn’t you?!

Rowan is absolutely terrible at surprises. As soon as she had the ring and plan together, she started acting suspiciously, and I knew what was up almost immediately. But I didn’t tell her I had caught on to her plan.

She took me to the beach right around sunset and asked if I wanted to look for shells. As I was walking, she hung back a little bit, and when I turned around, she was on her knee and asked me to marry her. She had picked out the perfect ring, and everything was so simple, sweet, and intimate. We had champagne on the beach (that she picked up as an afterthought at the gas station. Shoutout to that $12 bottle of Cook’s champagne!). It was a perfect night.

You found wedding planning really challenging, talk more about that.

Planning the wedding was BY FAR, the most stressful year of my life. We were living in Florida at the time and planned to get married in Utah. A few months before the wedding, we decided to move when Rowan finished grad school. We packed up whatever we could fit in our two cars, took the cats, and drove across the country to Washington. Then we got married in Utah a month later.

As far as actually planning the wedding, there was The Soup Debacle. Rowan and I decided we wanted to have various soups as our dinner, along with side dishes, drinks, desserts, etc. We were met with opposition by some of our parents, and it ultimately led to a conference call with all three sets of our parents, and me and Rowan on the phone arguing about whether soup was a good idea or not. The phonecall ended in one parent walking out, a few people talking over each other, me sobbing, and Rowan trying to mediate. It was a nightmare. But we came to a compromise; I got my soup, the parents got their “real meal,” and all was well.

To think that one of the most contentious moments leading up to the wedding was over soup is funny now, but at the time, I think we had all reached our limit, and it got blown WAY out of proportion.

What inspiration did you have in mind when you were planning your wedding?

I changed the bridesmaids’ outfit color so often before landing on yellow, and I’m glad I went with that. It brightened up the pictures, and all our girls looked amazing. And our bridesmen looked very handsome in their maroon velvet ties.

…and those incredible outfits?!

Rowan is not a dress kind of gal. She knew she didn’t want to walk down the aisle in a dress or with a bouquet. Her mom helped put together a fabulous, unique outfit that fit her perfectly. She wore her grandparent’s gold jewelry that tied the look together so well.

My amazing sister-in-law was in town for a few days and offered to take me dress shopping. I thought I would try a few things on and get a feel for what I liked, but I ended up walking out with my wedding dress that day! It was unlike anything I had pinned on my Pinterest board or showed as a reference. I surprised myself when I picked it. After saying I liked the material of a dress I tried on but didn’t love the dress itself, the woman helping me pulled a dress from the back and told me to try it. I felt so sexy and pretty. It was unique but simple, and exactly what I wanted for my wedding day.

If we’re honest, we don’t remember much of the day. I spent the morning running around, putting together gift bags for our bridespeople, writing letters to my in-laws, and getting ready.

Rowan went to the spa, drank mimosas, and hung out with her friends. No one tells you how much of a blur your wedding day is. That’s why, and I cannot emphasize this enough, you need an amazing photographer to capture all the moments you don’t get to soak up while they’re happening.

What we do know is we were so in love that day. We drank, ate, and danced with friends and family that came from all over the country to celebrate with us. It was an incredible day, even though the details are a little fuzzy.

Tell us some of the memories of the day you’ll never forget.

One of our collective favorites was seeing each other for the first time that day. We did a first look with just the two of us. As soon as I turned the corner to see Rowan, I couldn’t stop crying. Thank goodness we did the first look before walking down the aisle because I was a wreck.

One of my personal favorite moments was the speech my dad gave. We aren’t the most affectionate family but hearing my dad stand up in front of all of our family and friends and tell me he’s proud of the life I’ve built with Rowan meant more to me than he knows.

Rowan’s favorites were when we took pictures in the vineyards after the ceremony. It was a break from everything that just happened where we could goof off and just be with each other. Not to mention we got some fantastic pictures out of it. Another one she said was the “speak-easy” that happened during the reception. We did a beer and wine bar, but someone snuck some liquor in, and those who knew the password could get a special cocktail.

And, you had a handful of standout vendors, right?

Honestly, they were all amazing. I wish I could give you a standout, but each of them made us feel comfortable. We were a bit nervous having the wedding in Utah considering how religious the state is and us being a same-sex couple, but I was blown away by the kindness of everyone we worked with.

Brenda, one of the venue owners, gave a list of vendors and put a star next to everyone she knew was LGBTQ+ friendly. She probably doesn’t know how thoughtful that was, but it made me feel so much better about choosing who we wanted to help plan our day.

However, nothing would have come together without Arlene, our florist, planner, and decorator. I audibly gasped when I walked into the venue on the day of the wedding. She turned an already beautiful space into my dream wedding. The day ran so smoothly, thanks to her. She even helped me work in a bouquet toss in the middle of the reception because we decided last minute we wanted to do one.

Every single person that helped that wedding come together did an incredible job.

We tried to stay away from anything too religious. However, we did get married under a huppah, which is a Jewish tradition. Rowan’s step-dad is Jewish, and she grew up celebrating holidays with him, and we wanted to acknowledge that at the wedding.

An Intimate Elopement by the Red Rocks in Sedona