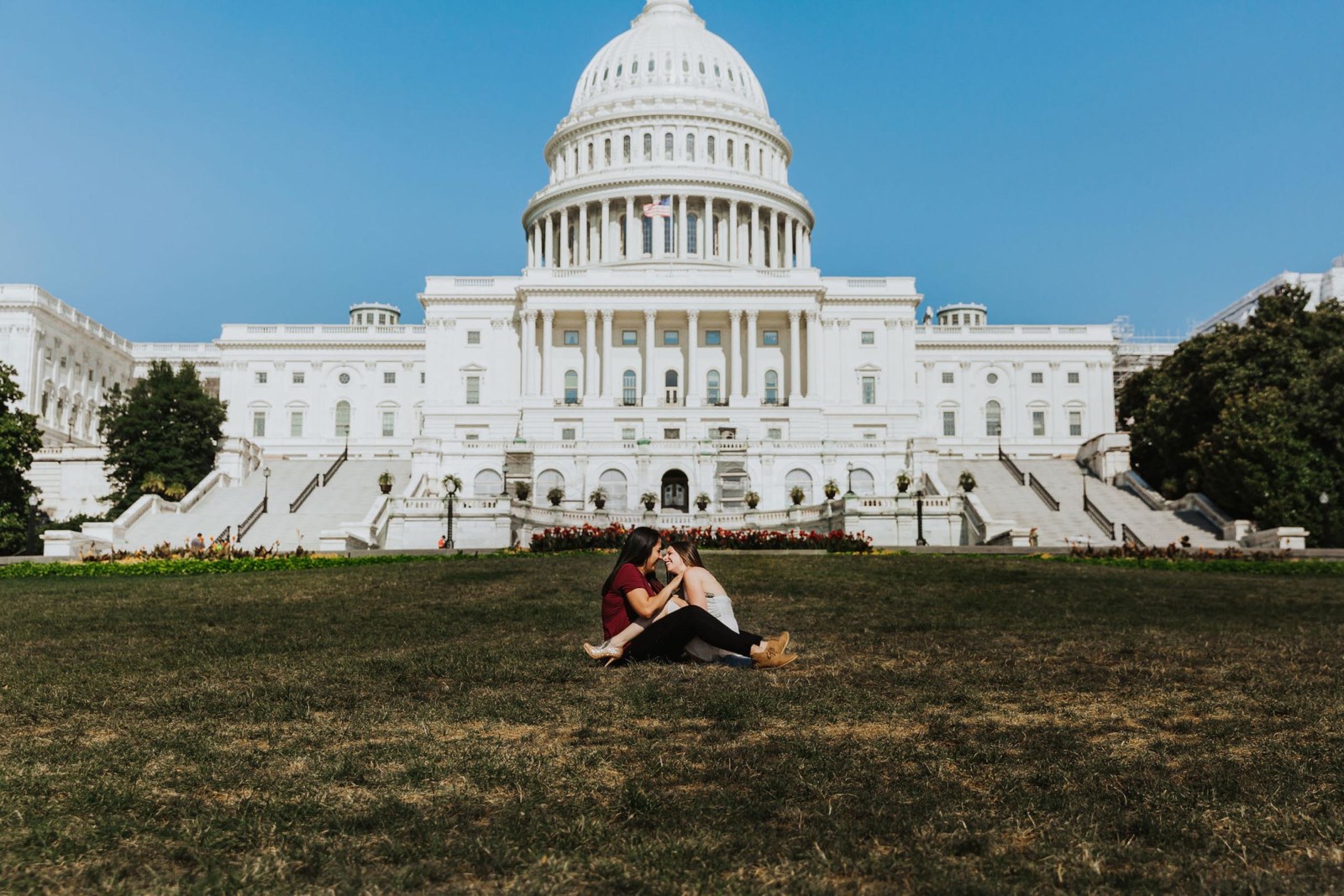 With a shared love of theatre, Fran & Lynnea shared a musical theatre themed proposal on stage at the Kennedy Center in Washington DC.

L: We have been together for over ten years. In fact, I wasn’t even in my 20’s when we started this fantastic journey together. Fran never pressured me for anything and really showed me how to be the best version of myself.

We met in a southern restaurant in San Juan Capistrano, California. However, I started out as a server shortly moved into the kitchen to do all of the restaurant’s baking. This is where Frans and my relationship took on a whole new identity. Fran was one of only three chefs for the entire restaurant, as well as the only female in the kitchen. Fran caught my eye from the first day of orientation. Although neither of us knew it then, it would be the start of an amazing adventure.

And, tell us all the proposal details…

F: I saw the perfect opportunity when I found out the musical ‘In the Heights’ was coming to DC around March 2018 for their 10th anniversary at the Kennedy Center. It was so special because we had seen the same musical for our first anniversary in 2010, and Lynnea is a musical theater major. I messaged them three weeks before the show. Asking them if there was anything they could do to help me out for this special occasion. I suggested that if there was a possibility to do it on stage that I’d love the opportunity and the Kennedy Center was quick to tell me that it was a tough request due to the stage show liability.

A week before I was going to propose to Lynnea, the Kennedy Center reached out to me with the idea to do it on stage, but only after the show was over. I was all in for that; it was more than what I expected.

I told Lynnea that we were going to go to a music festival. As she was getting dressed, I saw that what she was wearing was way too casual; I had to make her change.

We went to have dinner at a Peruvian restaurant called Nazca. It was delicious, from beginning to end. After dinner, we head to the Kennedy Center [still Lynnea had no idea]; as we pulled into the theater, I could see the smile on her face.

We walked into the gorgeous theater, and Lynnea still hadn’t figured out what we are about to see.

As we are waiting for doors to open, we are walking through the gift shop. And in the background, the soundtrack of ‘In the Heights’ is playing. That is when I see Lynnea’s face and eyes light up, and she literally freaked out. At this point, I was trying so hard not to show any nervousness because I didn’t want her to know what was coming!

Once we are in the theater, we are led to front row center seats and enjoy every moment of the show. Intermission comes, and my anxiety level was through the roof.

We grab a drink and walk around Kennedy Center, and I’m just going over and over in my head what I’d say to her when the moment came.

We go back inside to finish the show, which was terrific in every way and just like the first time we saw it. Right after the show was over, we were about to walk out of the theater, and the stage manager was waiting for us right outside. She called my name and pulled us to the side; Lynnea first thought was that I was in trouble. So the stage manager starts to guide us to the green room, where they had every musical/show ever been on that stage, we keep walking, and we ended up on stage. It was at this moment when I start to shake, my hands were clammy, and I was stuttering.

I gave my phone to one of the people on stage to take pictures and videos. I had the ring in my hand, and I just started to act really awkward. Lynnea thankfully distracted by being so amazed at being on the Kennedy Center Stage.

I grabbed her by the hand, pulled her towards me. I told her that I had completed the one request she had asked of me. That if I ever proposed to her, I was to talk to her parents first. As the words were coming from my mouth, I got down on one knee, and she broke down into tears.

I was indeed having an out of body experience. I felt like I blacked out for a second.

She said, “YEEEESSSS,” to our surprise, the theater was still full of people, and we got a massive cheer of people clapping and screaming. It was just something that came along precisely how I expected and so much more.

Maddie & Molly – Planning a Micro Wedding in Less than 3 Months

Aliah & Emma – The Challenges of Being Non-Monogamous