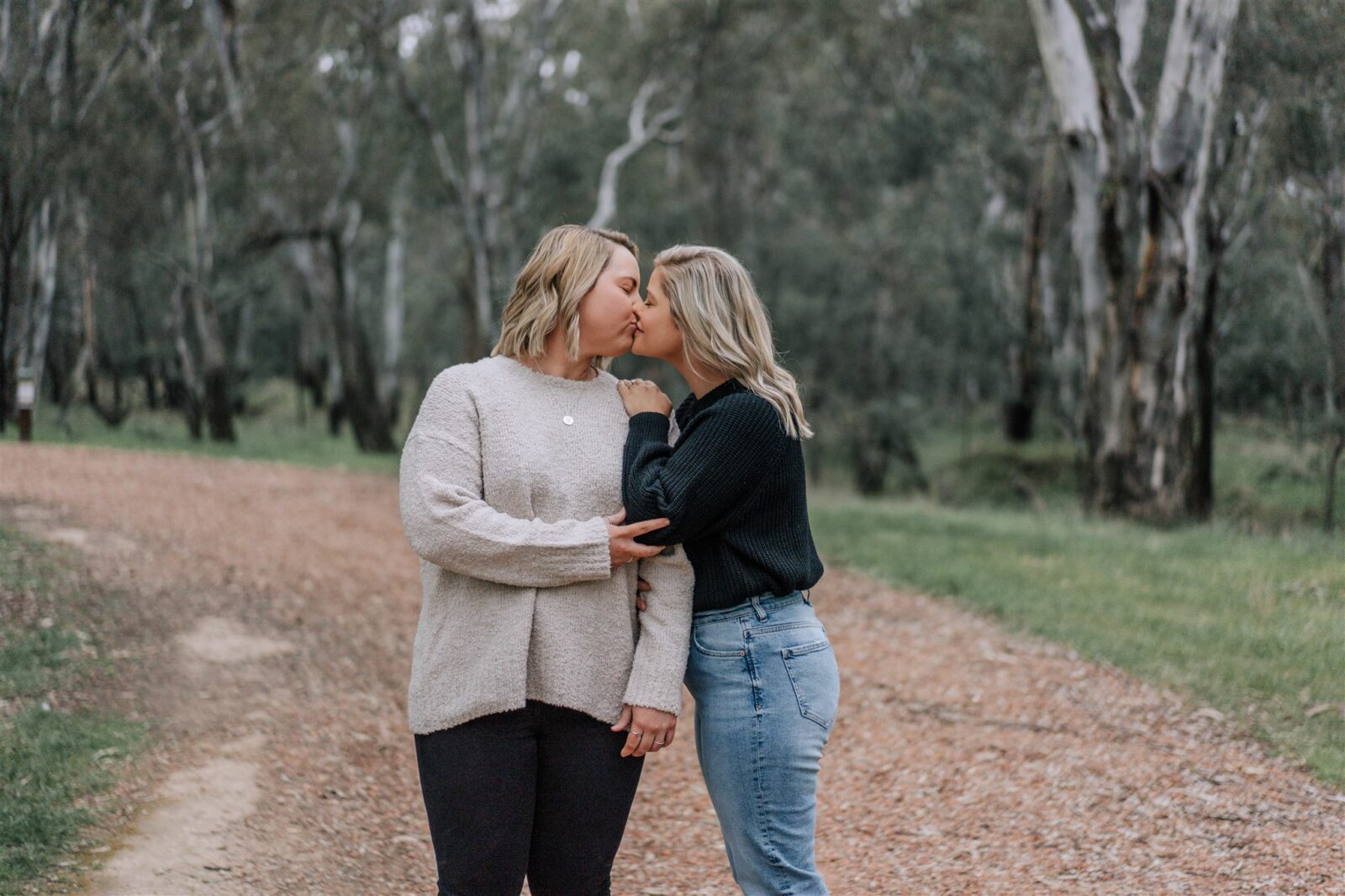 A Simple but Modern Backyard Wedding in LA

After two proposals, one a romantic at-home date, another on the beach, Georgia and Caitlin are intentionally planning a wedding where they connect with every vendor.

We matched on Tinder, while one of us was in town, the other at the airport leaving town. It was certainly a sliding doors moment.

We moved pretty quickly after talking online to texting and organizing that we meet halfway in Gisborne. Caitlin’s rule was that we had to meet in ten days, and Georgia made sure they spoke on the phone to ensure she wasn’t a serial killer. Sure enough, the Wednesday dinner date rolled around, and we met at the local pub. It was a fantastic evening where all we did was talk for hours about work, life, where we want to be in the future, and who we are.

Finally, the waiter told us they were closing, and we needed to leave. Safe to say, we organised another date soon after.

I proposed to Caitlin first at home in the lounge room. We had talked about rings and what we liked the months before we had even tried them on. Fairly soon after we tried on rings, I ordered Caitlins quickly.

Caitlin’s ring was posted in the mail, and it was a terrifying few days of waiting for it to arrive. Finally, the day it was due, Caitlin was meant to work in the office.

I had planned to ‘have a sick day,’ and then Caitlin popped her head into the kitchen and said, ‘George, I’m working from home today.’ I had to think of a cover story pretty quickly.

The doorbell rang, and I told Caitlin that I had a little present just cause, but she wasn’t getting it yet.

I quickly rushed down to Pandora and bought a ring as a cover-up for weeks until the proposal day was planned.

On the day of the proposal, I set up the living room with candles, fairy lights, and pictures of us. A platter was prepared with wine and chocolate.

We had planned to go out for dinner, so I called Caitlin as she was on her way home to hurry her up because we had a 6 pm booking. Caitlin rushed in the door with no idea and just said WOW, what is going on. She walked through the hallway of tealight candles into me, standing at the end where there were flowers on a bar cart.

Caitlin still didn’t really know what was going on because it wasn’t out of the ordinary for me to do cute things like this until I got down on one knee and proposed! She burst into tears and asked if I was serious! She said, “Yes!”

And, how did the second proposal go?

I proposed to Georgia the day before new years eve on the beach at Barwon Heads. We had headed down there to spend some time with our close friends and thought it would be the perfect opportunity.

I wanted George to have the experience of being proposed to even though she had already proposed to me. It was really important to me that she had that moment and memory.

She was a nightmare to pick a ring for because she couldn’t decide what she wanted. After many three failed attempts trying to order something, having the invoice in my inbox to pay, and coincidently the next day, Georgia would come out and say she wanted something totally different.

I decided just to pick a ring and commit to it because if it were up to Georgia, she probably still wouldn’t have decided.

I must note she loves the ring I chose and is really happy with it.

We had a beautiful dinner at Barwon Heads over looking the water, and decided to go for a walk along the beach as the sunset. So we sat down on the sand, Georgia got up to leave, and I got on my knee and proposed.

Georgia thought I was joking until I pulled out the ring box, opened it, and asked her to marry me. Safe to say that Georgia said yes and was very happy with the moment we shared on the beach!!

We don’t think anything has changed between the two of us with our engagement.

Not long after, we bought our first home together and renovated it, so in some ways, the engagement fell to the back of our minds fairly quickly because we were too busy choosing kitchen colours.

But, we definitely feel like it has been a step towards the commitment to each other and us as a couple and starting our life together. We think it has brought us closer, and we are both itching to be married.

Caitlin is so funny and talks all the time that she just wants to be married. She doesn’t really find the fuss in the wedding or the planning. She just wants to call me her wife and start the rest of our lives.

Pretty cute if you ask me.

How are you finding your key wedding vendors?

It has been essential to us that we connect to them.

We have really wanted our vendors to be on our journey with us and incredibly supportive of us as a couple. We have wanted to make sure that they are excited we are getting married, we have been fortunate that some of the vendors have popped up in our lives at the time we had to make decisions, and others we have sort out due to reputation and reviews.

We did so much research on Instagram and Pinterest on what we wanted our day to look like and who we thought would be able to make the dream become a reality.

Research and planning have been vital to locking in our vendors and ensuring we are happy with the product and service we are getting.

A Simple but Modern Backyard Wedding in LA

A Modern Disco Wedding at an Adelaide Nightclub