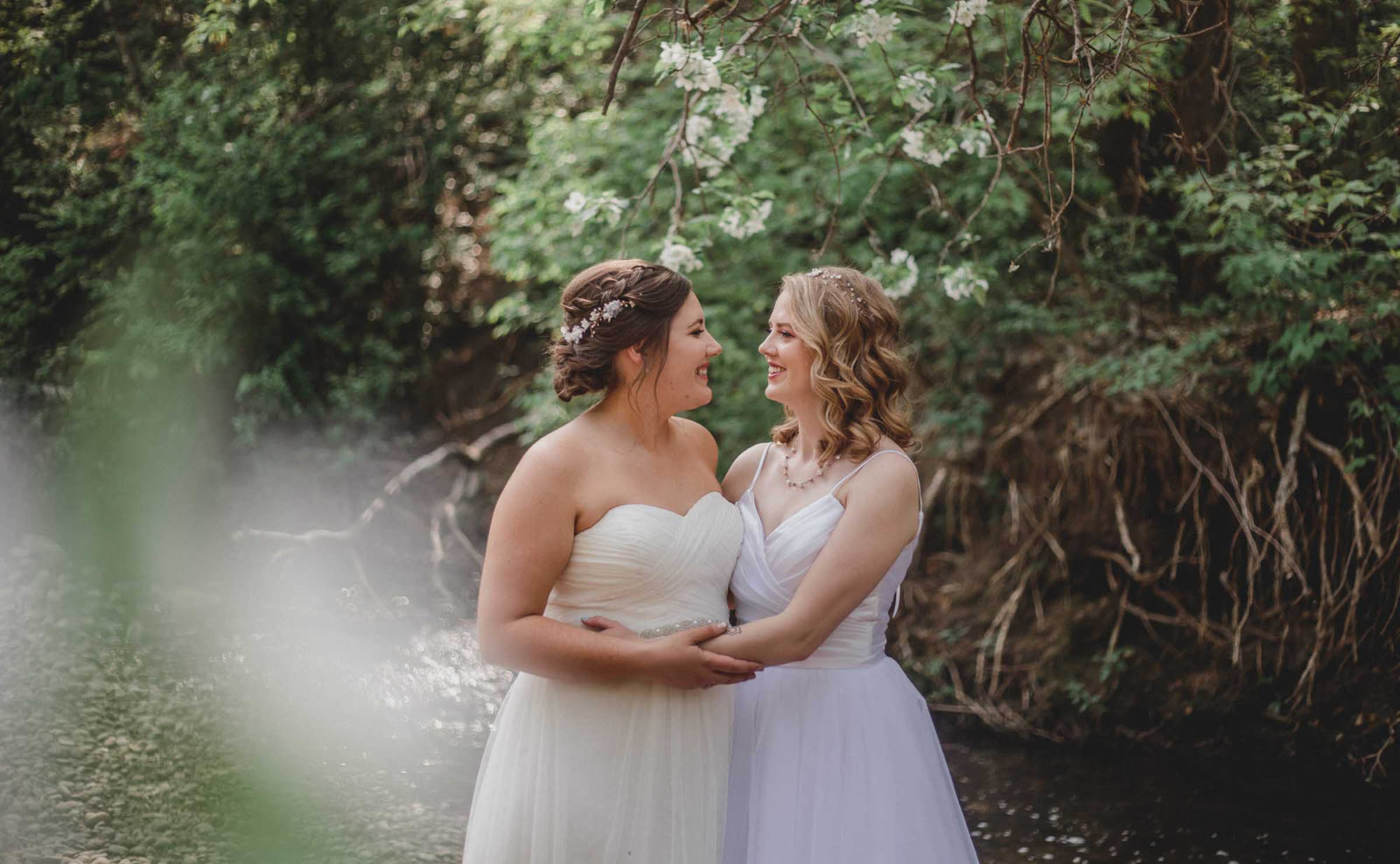 A broken foot and a wildfire couldn’t even stand in the way of these two lovers from Alberta, Canada, saying ‘I do’. They have a joint love of beer, and so, a brewery wedding was on the cards from the very start.

G: Sara and I met in 2012 through our mutual friend, Owen. We met at a University dive bar in Edmonton during the first few weeks of the 2012 Fall school semester. We never quite connected, until a large group of friends went camping the following summer where we spent the whole night getting to know each other and hit it off.

Our first official date was in September 2013. It involved dumpster diving behind a grocery store in downtown Edmonton, a home-cooked meal made by my friend Chris, and a midnight canoe and bicycle adventure on the North Saskatchewan River, which runs through the heart of Edmonton. Although Sara would like to note that she did not, nor has ever been inside a dumpster. Our first date was not preplanned at all, but it was such fun, and by far, the most memorable first date either of us had ever had! We both knew we had found something special, although it took another month before we officially became a couple.

G: I had been planning to propose to Sara for about ten months. I knew I wanted to ask her somewhere in the mountains and somewhere that was just the two of us. I decided that I would do it during our summer road trip up to Alaska. After getting Sara onboard to hike the Chilkoot Trail- a 53 km historic trail running from Alaska to Northern BC- I knew the top of the picturesque steep mountain pass would be the place to do it. I knew that Sara would want one thing and one thing only after a long, entirely uphill hiking day: Candy! So I bought her a candy ring pop.

Unbeknownst to me, Sara had been planning her own proposal and popped the question just two days into our three-week-long road trip! She knelt on one knee, the beautiful Muncho Lake in the background, and asked me to marry her earnestly. I laughed in her face and exclaimed, “I HAVE A RING IN MY BAG TOO!” With the beach and turquoise lake in the background, we popped a mini bottle of champagne and took photos of our mismatched rings. It was the perfect proposal, and we both got to be surprised!

S: I was also planning to propose to Gill on the mountain pass of the Chilkoot Trail. I began wracking my brain to figure out a spot to stash the ring in my hiking pack, knowing that Gill would find it if I weren’t careful. Once I figured out the place, I looked at the itinerary Gill had planned, and that was when I realized the day of the mountain pass was two weeks into our road trip. There was no way I could hold onto the ring for that long! On our second day, we stopped at the beautiful Muncho Lake, I put on our song and nervously knelt on one knee.

G: Even though we had done very well to plan the wedding day, the week leading up to our wedding was hectic!

Sara broke her toe three days before the wedding and wasn’t sure if she would be able to walk without a limp or wear closed-toed shoes, let alone the heels she had planned to wear. Two days before the wedding, Sara’s family was evacuated from their hometown of Slave Lake Alberta, due to concerns over nearing wildfires. The skies all across Northern Alberta were amber-orange with soot, and the strong smell of smoke was in the air the entire week before our wedding. Both Sara and I have been evacuated from towns due to forest fires previously- Sara and her family fled from Slave Lake in 2011 while her childhood home burnt down behind her. And I was evacuated from Fort McMurray during the fire of 2016 while doing practicum hours at the hospital. The terror and helplessness from these experiences were definitely at the forefront of our minds leading up to our wedding. Because Sara’s family has gone through this before, they efficiently packed up their essentials and drove away from the dangerous fire zone.

Luckily the day before our wedding, it rained across our province, and the skies were looking clearer, but the smell of smoke and a film of fog was still in the air. On the day of our wedding, we woke up to clear blue skies, a hot sun, and the fresh smell of summer- not even a hint of smoke in the air! We really hit the jackpot! This also meant that Sara’s family could breathe a sigh of relief knowing their homes were spared from the blaze.

As a bonus, when I saw Sara for the first time on the wedding day, the first thing I noticed was that she was wearing the bubblegum-pink heels she had bought for the big day, thanks to the Advil and medical tape!

We decided to be traditional and keep our wedding outfits a secret from one another until the big day.

We got married on the rooftop patio of the Craft Beer Market, which is located in downtown Edmonton. It’s one of our favorite spots to go out to as the food is excellent and the beer selection is even better. It was one of the first places we thought of, and it made for the perfect location for our marriage- intimate, modern, outdoors, and unconventional.

S: It was everything we wanted and expected, and then some!

We each got ready in separate Air BnB apartments that were in the same building. Our hair and makeup artists met us at the apartment and got our whole crew dolled up. Even going as far as to put hair gel in Gill’s bridesman, James’ hair to make him feel snazzy. Of course, all of this included mimosas in hand.

We walked to the Craft Beer Market separately. Our maids-of-honor coordinated with each other so we wouldn’t see each other, leaving the apartment building during the walk.

Craft was terrific; they had decorated their patio with fresh flowers for the summer season. The one thing that we didn’t think about, however, was the birds. Since the crowd was not as rowdy as an average day on the bar patio, the pigeons stuck around for the ceremony. This caused a bit of concern for Shawn, Sara’s brother and one of her bridesmen. Sara was notorious for having bad luck when it comes to getting pooped on by birds, especially when she was a child. Little did we know, our friend was the bird poop magnet that day. Thankfully, it happened to a fantastic person who did not want to bother us with this right away. He simply wiped it off with a rag and left his jacket on the back of his chair for the rest of the night. We didn’t find out until the next day.

After the vows, we had a quick “holy shit” moment, just the two of us and two beer pints, of course. We took in each other’s dresses and enjoyed a little quiet time before heading back up to the patio for a lovely toast by Gill’s bridesman, James followed by food, more drink, and visiting with our guests.

We then piled our party into a limo to take us to our photoshoot location.

Our photographer picked out a fantastic ravine with a variety of different scenes, which allowed us to get many unique pictures without having to travel between multiple locations. We were able to get photos on a few pedestrian bridges, some wooden stairs, trees, a creek, and some rocks. The mayday trees in the ravine were flowering, which was a happy accident and made for some beautiful photos!

Our main goal for the reception was to have a big party! We invited 120 people to help us celebrate.

G: The whole day was the best day of my life. Honestly, in every way!

One of my favorite moments was after we were married, we left the patio to spend time just the two of us. Our officiant had suggested we do this and said it’s been something other couples had enjoyed doing. In our wedding timeline, we had it labeled as “Holly Shoot, We’re Married Moment!” and it really did feel that way! We had a friend bring us two pints of beer, and it felt like a mini wife and wife celebration before we celebrated with all our guests. It was extraordinary!

I’ve been dancing my whole life and picked up swing dancing around seven years ago. At our reception, we did a jam circle on the dance floor with all my dancer friends cutting in to dance with me- that would have been super fun on its own. Then Sara cut in to dance with me and dip me right at the end of the song! She is way shyer than I am and doesn’t often dance in public, so it was truly surprising. No one got pictures of that moment, but I don’t regret that, because it meant that everyone was having too much fun dancing with us. That was definitely the most fun moment of the entire day.

S: I loved that we had lunch served and took a bit of time to socialize with the people at our ceremony. It made everything feel so much more intimate.

I also loved the dance circle. It was something that I did not want to do and told Gill I would 100% not be doing it. During the reception, my friend convinced me that it would be fun even if I just swoop in at the end for the dip and boy, was she right! It was so much fun and surprising! The DJ loved it so much that he mixed in another verse to keep the dance circle going a bit longer (much to my dismay), but I think I held my own!

G: Marriage is a commitment that a person willfully supports another person’s mind, to be faithful to them, and be honest with them. It’s a commitment to grow with that person as life and circumstances change. Marriage is lifting your other half up when they need it and helping them to stay grounded. Marriage is also a public declaration to the world that your union is serious, forever, and enveloped with love.

S: Marriage means that Gill can’t get too mad when I put my cold hands up her shirt to warm up. But in all seriousness, our community has fought and continues to fight for the right to marry and not only am I lucky enough to find the person I want to spend my life with, but I can practice my own, small form of protest by declaring my love for her to the world.