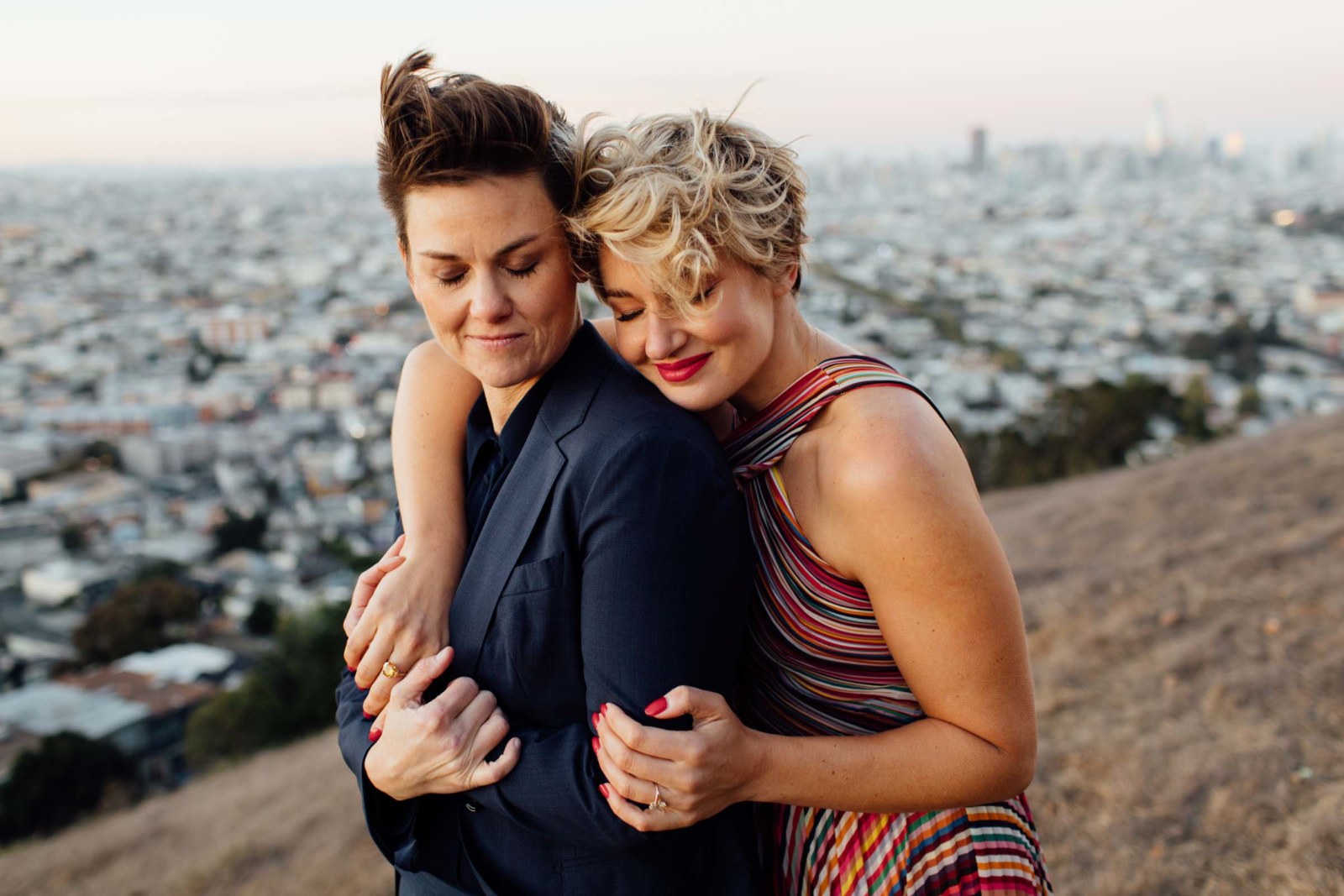 Because they both work in fashion-tech, many people think they met through work – but they actually met on HER dating app.

Ginger was on her way to the airport on a Monday morning, and when she tapped “like,” Maghan liked her back within minutes. They texted throughout Ginger’s entire flight to Austin – she didn’t even open her laptop, which was a first.

That was the beginning of an ongoing conversation that hasn’t really stopped.

Their first date was drinks and dinner on Saturday [the soonest Ginger could make it], and by the time they met in person, it was both exhilarating and nervewracking; by then, they’d been talking for a week.

That’s an obvious risk in digital dating, but they couldn’t help it. It seemed like they already knew each other. They were both relieved that the in-person experience was even better than the digital one.

Ginger kissed Maghan before they even got to dinner number three.

When it came to planning a proposal, “It was a nightmare,” Ginger says.

She had a particular vision for the ring, but she wanted to keep the whole thing a total secret from Maghan. “Buying a ring was next-level – you basically need a Ph.D. to work it out,” Ginger says.

She feels like she looked at almost 1,000 rings, and her next alternative was something custom. But, something caught her eye on Instagram from Trabert Goldsmiths in San Francisco: an antique oval diamond (called “moval”) from the 1920s in a modern, yellow gold setting. When she saw it in person, it was casting small prisms, something Maghan occasionally uses in her art. So she knew she had found it. She ended up carrying the ring in her pocket for three months – all over San Francisco and Los Angeles, Florida, and Greece. Waiting for the right time.

She was about to put it in a safe because even the most “perfect” situations just weren’t right.

One weekend, Ginger and Maghan went “glamping” in the small town of Guerneville, California. They went hiking in the redwoods, and as they descended a hill among 1,000-year-old trees to a clearing with a waterfall, they were totally alone. That happened to be the “right” time.

To say that Maghan was shocked is an understatement. The funny part is that Maghan always has her nails done. But for this trip, she wanted to be “authentic,” so, despite Ginger’s encouragement, she hadn’t gotten a manicure.

While nothing has changed about the way they interact day-to-day or their mutual willingness to be together long-term, being engaged has shifted the perceived legitimacy of their relationship to the outside world. Especially as they live and travel abroad. The engagement is an outward signifier that is universally recognized as significant – perhaps the ultimate representation of “significant other.”

While the wedding vision is small, elegant, and glamorous, it remains a vision. Especially as they are working abroad, they haven’t had the necessary time to start planning.