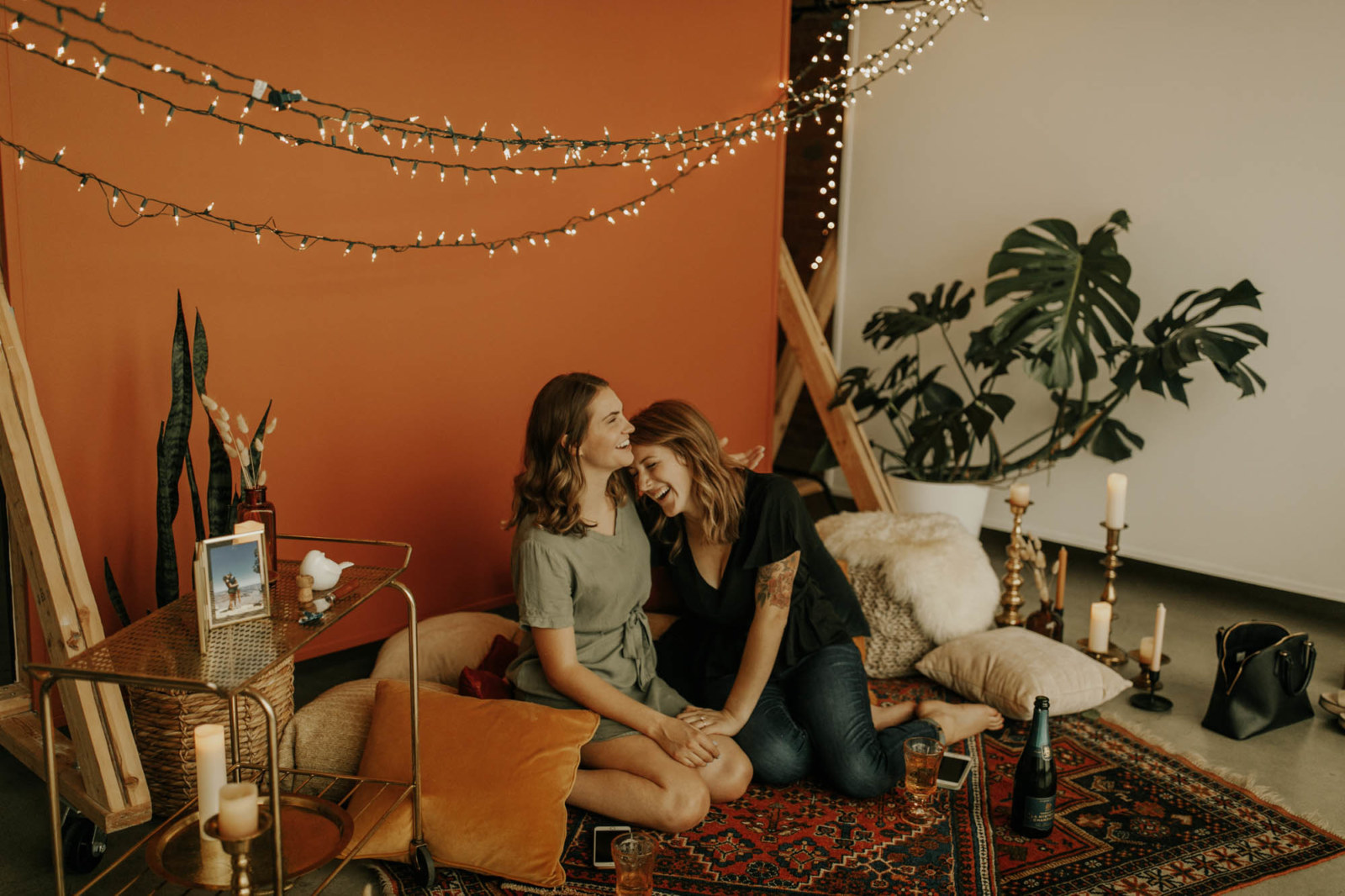 Ash & Bree – An Adventure Elopement at the Rocky Mountains

Gracie is a planner. She had everything set out for the proposal, planned to the minute. However, sometimes even the most wonderful of things don’t go quite to plan. Eventually, Plan C would be the plan that she would get down on one knee to.

There were challenges you had to overcome in those early days of your relationship. Tell us more about those.

When Jessica and I started dating, we became a serious couple almost immediately. This was partly due to the fact that there was so much chemistry, but also because Jessica’s mom was very sick.

Jessica’s mom (Tammey) had been diagnosed with Glioblastoma (A rare fatal brain cancer) 5 years prior. As our relationship started, things began to decline. Tammey and Jessica were best friends for Jessica’s entire life, and she had even delayed going to college to be Tammey’s full-time caregiver.

After only a week of dating, we were traveling down to Redmond, WA from Bellingham (about a 2-hour drive) every weekend. This meant that our relationship moved very quickly. I became Jessica’s source of support as she was going through the most difficult thing imaginable.

On December 28th, 2018 Tammey passed away in the comfort of her own home with all of her loved ones surrounding her. I was lucky enough to be by her side, grasping Jessica’s hand the entire time.

At this point, we had only been a couple for three months. Starting a new relationship while someone is weighed down by grief is very challenging. During this difficult time, I was applying to medical school. Eventually, I was accepted into the University of Washington School of Medicine in January of 2019. We knew that this would bring on a whole new challenge for our relationship.

It took us a while to figure out how to grow and support each other, and we have our friends, family, and therapists to thank for loving and supporting us through it all. We moved to Spokane, WA, together in August of 2019, so that I could begin medical school.

In March of 2020, I found myself more in love than ever. I knew I was ready to fully commit to a life with Jessica. So, I designed and purchased a ring and held on to it for six long months waiting for the right moment. I hired a photographer, and we set a date for September 12th.

The one thing that people know about me is that I am a planner. I have my schedule nailed down to the minute of every day, even on weekends. I had basically our entire wedding planned before we even got engaged.

This engagement was going to be no different.

I planned a romantic date night on a local Spokane restaurant rooftop overlooking the city, with our favorite music playing, her favorite food being served at a romantic picnic designed by a local vendor. This plan was perfect, and I played through the event in my head a thousand times to make sure that I could not forget anything.

As the day grew closer, I asked each one of Jessica’s family members for their blessing, and did the same with my family. I invited Jessica’s brothers, sisters-in-law, and her father to come surprise her after the proposal.

Everything was planned, and it was all going to be perfect.

Two weeks before the proposal, I visited the venue to make sure that it was as I pictured. I learned that the building was not willing to work with me. They had been ignoring my emails and phone calls for weeks, and had never informed me that they were not on board with our previously agreed to plan. I had to jump to plan B.

I spent eight hours scouting every beautiful place in Spokane that I could think of, and ended up deciding on the top of Mount Spokane. This gorgeous scenic drive ends at the very peak of a mountain with a breathtaking view. I imagined getting down on one knee, and asking Jessica to marry me as the sunset over Spokane and knew that this was the new place. I re-informed the photographer, designer, and Jessica’s entire family of the new plan, and they reassured me that it was going to be perfect.

Fast forward to the morning of September 12th, the day of the proposal.

And, not everything on that day went to plan. Tell us more!

I woke up to see that Spokane’s entire city was coated with a thick sheet of smoke from the West Coast wildfires. Spokane’s AQI was over 490, and it was considered “extremely hazardous” to be outdoors. Of course, this meant that there was no way we were getting engaged on the top of a mountain.

I had a moment of panic and texted my photographer.

She replied that she had a local friend who owned a studio that we could use for the proposal, and that she would get everything set up. This seems like “problem solved” to a normal person, but to the ultimate planner, who needs to control every tiny detail of every moment of their day, this was the worse news I could have received.

I knew that there was nothing I could do, and agreed to have our special day at location number 3, a studio that I had never been to before.

I re-informed all people involved and gathered up all the romantic supplies I could find:

I had Jessica’s family drop everything off at the studio. Then I waited in sheer panic at my apartment while 5:30 drew closer.

Then, I asked Jessica if she wanted to go out to dinner, and she agreed. I requested that we both get dressed up, secretly knowing that we were about to take photos that we would cherish forever.

As we drove the studio, I was just running through everything in my head, trying to find a way to control the situation. I realized that I just had to let go.

We walked into the most beautiful scene I could have imagined. Candles lined a pathway to a dimly lit picnic, with a bar cart full of pictures of us, champagne, and Jessica’s mom. I said a few special words to Jessica about how much she meant to me. And then, I got down on one knee to ask her to marry me.

My shaking hands put the ring that I had kept hidden for six months on her finger. Everything felt perfect.

And, then you got a little surprise of your own, right?

Yes! Jessica immediately grabbed her purse, and said that she had something special for me as well.

I had been so worried about how the day was going to work, I did not even think that I might be getting a ring as well. She pulled out the most beautiful ring I have ever seen. The joy on my face is so evident in the pictures of that moment. After sharing this beautiful engagement together, Jessica’s entire family walks through the door to help congratulate us. She was absolutely shocked and beyond happy! It was in that moment, we knew that we were going to have the most special life together.

Sometimes things don’t work out as you plan them, and really, that is what makes those moments so special. Nothing went to plan, and it was still the most special day of my entire life. I cannot wait for 2022 when I can call this beautiful woman, my wife.

Here’s hoping that nothing goes to plan.

Ash & Bree – An Adventure Elopement at the Rocky Mountains

Hannah & Kay – Having Faith as an LGBTQ+ Couple

A Rustic Log Cabin Elopement with a Hint of Western Vibes