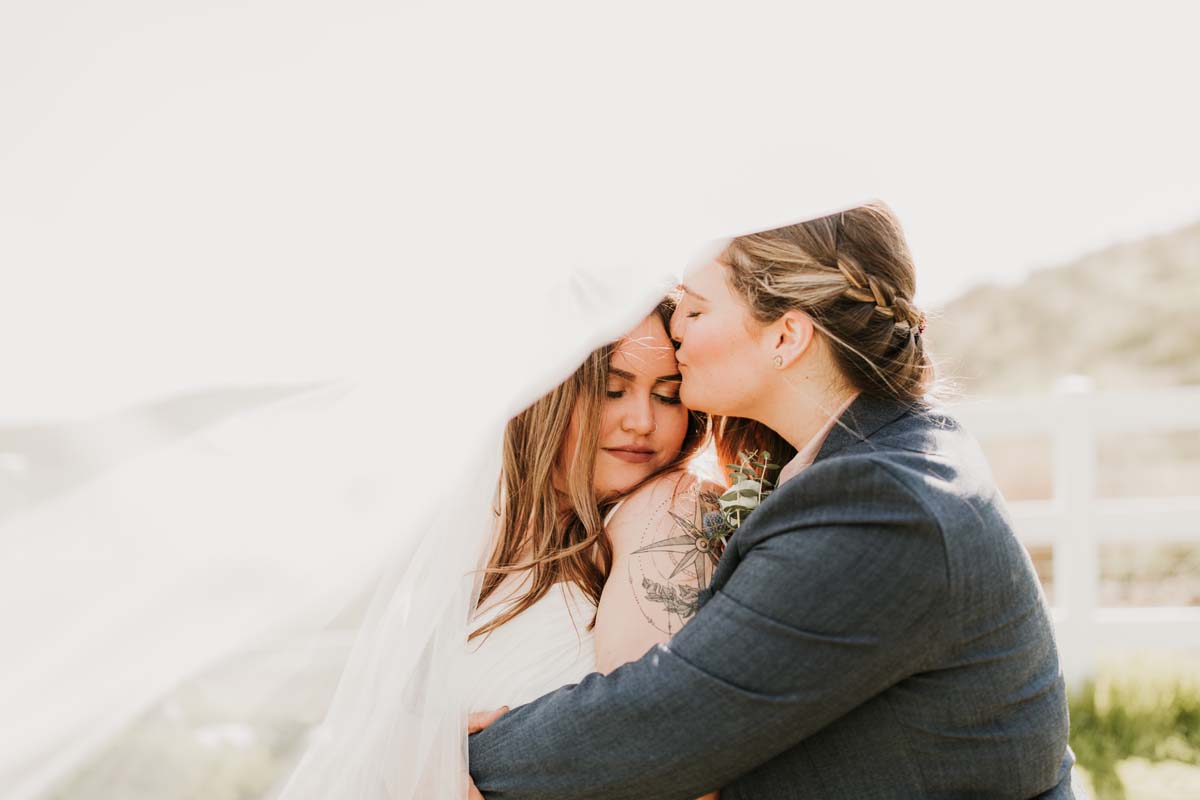 We’ve been together “officially” for about four years. We met online right before Kat moved to Northern California to go to grad school. The relationship actually unofficially started long-distance through phone calls, letters, and facetime dates.

The beginning of our relationship was a bit tumultuous, as Hannah was just coming out to her family and friends. Like many others, Hannah’s coming out had resulted in conflicts that challenged our relationship very early on. These struggles ultimately allowed us to realize how strong of a partnership we have.

Though some people felt our relationship moved quickly, we knew that we fit. Every day proves that to be true.

We knew early on in our relationship that marriage was in our future and had actually discussed Hannah being the one who would propose. Kat had been saving for a ring anyway since she knew exactly which one Hannah wanted. And she wanted to have it in the case that Hannah proposed. One day Kat saw that there would be a “pop up Stars Hollow” to promote the reboot of Gilmore Girls [our favorite comfort TV show.] When Kat saw the opportunity to propose in “Stars Hollow,” she knew she had to take it.

We went to the event and waited in line for hours in the pouring rain. People around us were complaining because they were cold and miserable. We laughed despite not having umbrellas or warm jackets. Kat struggled between deciding whether or not to propose because of the pouring rain and weird day. Ultimately it was the way they were able to have fun despite everything going seemingly wrong that she knew it was the right moment.

Anyone who knows the show knows the significance of the Life & Death Brigade and the phrase “In Omnia Paratus” [Ready for anything.] At this Stars Hollow event, black umbrellas were hanging from a tree, signifying the episode where Logan asks Rory to “jump with him,” he says; “people can live a hundred years without really living for a minute. You climb up here with me, it’s one less minute you haven’t lived.”

Underneath the black umbrellas, Kat asked Hannah to jump with her, and Hannah said yes.

We got married at Hannah’s aunt and uncle’s house in Temecula, California, a year and a half later. They were gracious enough to let us use their home for getting ready, the ceremony, and the reception. This was Hannah’s second wedding on their front porch. The first was when she was about five years old. Her family dressed her and a family friend’s son up in wedding attire and performed a ceremony for them. Moving around a lot meant that Hannah had never had a home to call home. Having her Aunt & Uncle’s home as a constant in her life and getting married there twice was perfect.

Pretty much all of our wedding day was DIY. A lot of it backfired, though. In the end, about half of the things intended to be on display never made it there, and it caused a ton of stress for everyone involved. Members of the bridal party put the bouquets together, family members and close friends set up the day’s tables. Kat and Hannah did a lot of the smaller details during the months leading up to the wedding. It was a group effort, but looking back on it, a wedding planner may have been a good investment.

Both of us have the same favorite moment. It is, without a doubt, the first look.

When the partition went down, and we saw one another, it was like we could breathe again.

That moment alone together was one of the only moments we got to stop and enjoy the meaning of that day. So it is the moment that we hold closest.

To save money, we went with a family friend as our DJ. She panicked and left after the first dance. Our knight in shining armor [Hannah’s maid of honor’s boyfriend] came to the rescue and DJ’d the rest of the dance portion of the night.

Our advice to other couples; if you are DIYing, plan everything down to the smallest detail. Make sure you have a team of people who know those details just as well as you do. Be okay with the outcome if it isn’t exactly what you envisioned. Also, make sure you thank the people helping you every step of the way. There are high tensions around weddings because everyone is trying to do right by you. They will feel pressure whether you are the one pressuring them or not. So make sure they feel validated and appreciated, and your wedding will go A LOT smoother.

Marriage, to us, is a combination of so many different things. It’s all of the silly and fun things. Like having someone who doesn’t judge you when you meow in response to a question. Or spend 98% of your time at home in your underwear. It’s also the everyday things, like deciding whose turn it is to cook dinner or wash dishes. Or waiting to watch the new episode of your favorite show because it’s a show you watch together.

Marriage means choosing each other. It doesn’t mean the absence of conflict or struggle. But rather the promise to pick each other in the midst of it all. Whether that means remembering the importance of each other over winning the argument or strengthening each other enough to face the world.

It’s being there in the big moments and the small moments and taking turns on falling apart. Marriage is wanting to figure it out and adapt together, even when it feels like you’re changing as an individual.

It’s a promise to find each other again when that change inevitably comes.