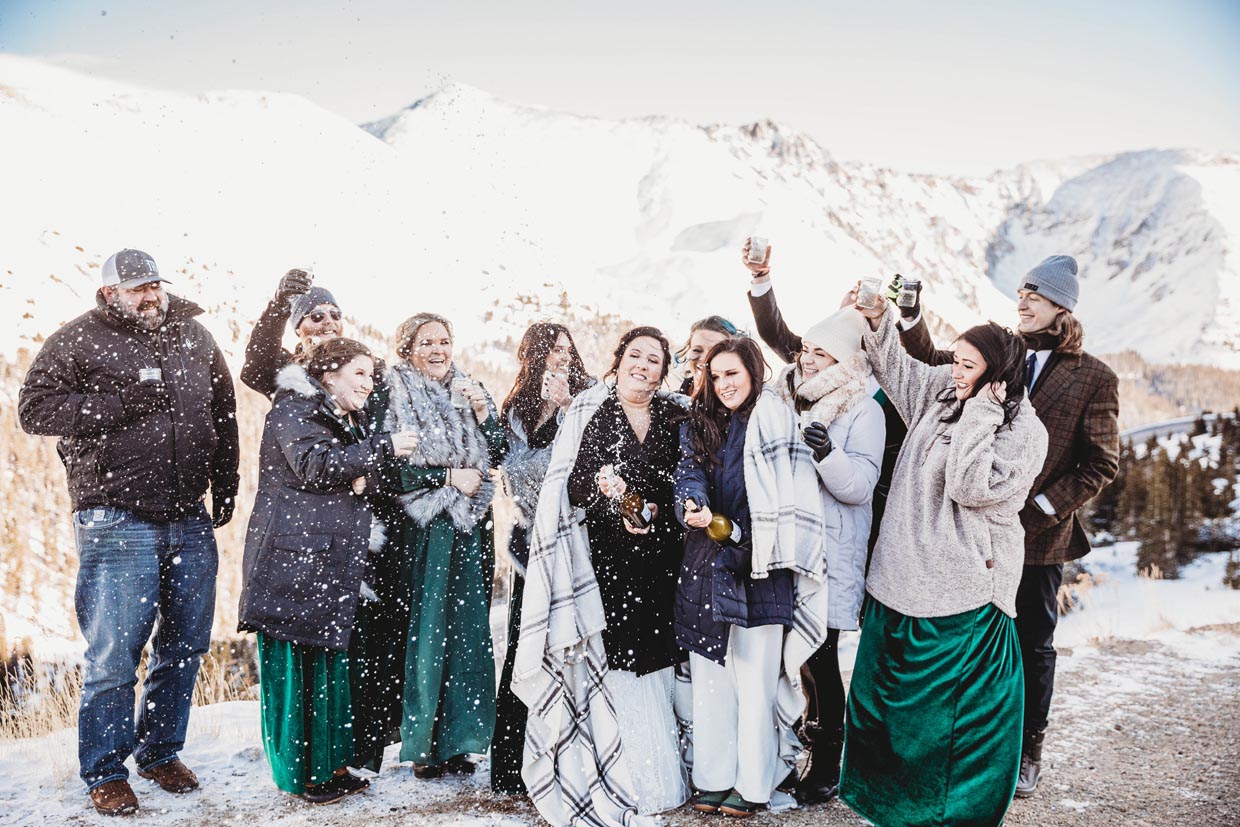 Not deterred by cold weather, Hannah and Madison wed in the snowy mountains of Colorado.

I proposed to Hannah on vacation to Colorado Springs in October of 2021. I scheduled a couples fall photoshoot with a well-known photographer near where we were staying with the intention of it being an engagement shoot. With Hannah having no idea what was planned, I had to sneak the ring into our suitcase in the pocket of the jeans I had planned to wear the day of.

As the day came, we took multiple pictures upon the wink the photographer giving the go when it was time to pop the question. When the time came, we were on a massive rock in the middle of the Garden of the Gods. As Hannah had turned around to get in the position of what the photographer had asked, I got down on one knee. When Hannah turned to face me, she was shocked and nervous because she was scared of heights and we were on a rock on a mountain. I grabbed her hand and asked her to be my wife.

Since that vacation, Colorado has been our favorite state to visit, and hopefully, one day, we will be able to call it our home.

Talk us through your wedding day.

Our wedding day was so peaceful, with no bridezillas, no bad vibes, and just an overall sense of warmth and calmness.

Our entire wedding party came to our Airbnb the morning of our wedding and started getting ready. The girls took turns getting their hair and make-up done while Madison and I visited with everyone and had breakfast that morning. Once we started getting ready, we were kept separate until the actual wedding. Madison and I had agreed not to do a staged first look because we wanted the actual first look to be authentic when I walked to her at the mountain.

About 1 pm, we all left the Airbnb and headed to Loveland Pass, about 15 minutes up the mountain. We were slightly confused about where to meet due to the weather that had occurred the previous two days. But everyone was on time and as we all arrived at the ceremony spot, I stayed in the car while Madison started walking up the snowy mountain. A few minutes later, I got out of the car and walked up behind her to get a first look. When she turned around to look at me, she was all smiles from ear to ear. It was the most precious and perfect moment. She was stunning, and you could tell she thought the same about me.

As we walked up the mountain with our bridal party and family behind us. Then we finally got to the snowy mountain top. The photographer immediately started taking our bridal pictures, and the ceremony of a lifetime began soon after. As we stood on the mountain staring into each other’s eyes, the pastor read scriptures from the Bible as we made several promises to each other. Soon after, we said our “I do’s,” the best words to ever come from our mouths. Instantly, we kissed each other for the first time as wife and wife. The pastor then announced us as Mrs. and Mrs. Woodle as we grabbed hands and made our way down the aisle with our fabulous bridal party.

We gathered again as we got down the mountain to have our first toast of champagne and cake cutting. It was beyond magical. As we went to pop the champagne bottles, Madison’s would not pop because it was frozen from how cold it was on the mountain, which was just hilarious.

After we did the champagne cheers with everyone, we cut our perfectly made red velvet cake. The cake was white, with trees engraved around it, and was so pretty. We stepped to the side to say our vows together after finishing the cake cutting. Vows on the Run played our wedding song called “I get to love you” as Madison started to read her vows first. I then, of course, read mine to her shortly after. We both had tears in our eyes by the time we were done reading them. They were the most sentimental, precious, and heartfelt words either of us had said to each other.

After the vows were read, we all loaded up to go back down the mountain to our reception spot. We had our reception at a place called “Saved by the Wine.” This was a small wine bar that also served cocktails along with the food we had picked for everyone. The whole day was filled with joy and happiness. December 11th is and will always be, hands down, the best day of both of our lives.

A Bride with Tattoos & A Rustic Barn Wedding

A Bride with Tattoos & A Rustic Barn Wedding

A Wedding with Two Queer Aboriginal Women & A Smoking Ceremony