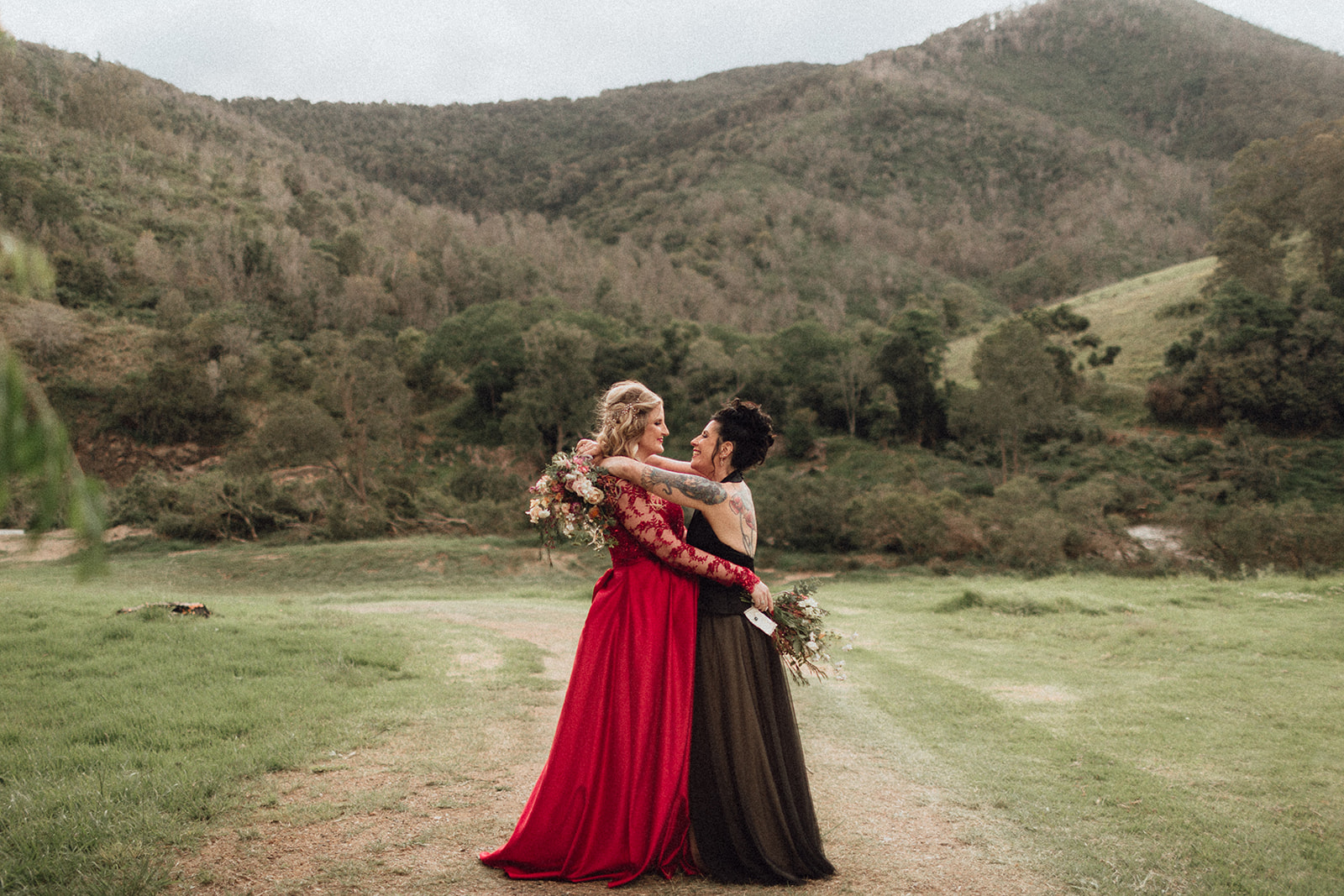 We were friends for a few years after meeting at a steampunk party in 2015. Leo was married to a wonderful man named Paul. They raised four children together (Leo’s three daughters and Paul’s son).

Harriet was in a bad relationship.

In 2018 Paul sadly passed away, and Harriet ended the abusive relationship.

We helped each other through the pain, and a close friendship quickly blossomed into an intense love. Unconventional and not fitting any of society’s approved timelines or boxes, it was a whirlwind of magic and glitter. Leo used to joke with Paul that if he were to die first, she would marry a younger woman and loves that he would approve because she’s doing exactly that.

When Harriet left the bad relationship, she called on Leo as the only person she knew with towing capabilities, so of course, Leo rocked up with a U Haul trailer, and Harriet filled it with a lot of useless stuff that has since been donated elsewhere!

So Harriet couch surged for a while, then crashed in Leo’s spare room for a bit.

Over time we realized that we wanted to be more than just friends, and while Harriet was overseas in early 2019, we decided to make it official. So on landing back on Australian soil, Harriet moved out of the spare room, and the whirlwind truly began. We spent the rest of the year partying until dawn, wearing too much glitter and not enough clothing. Lounging in pajamas watching queer and fantasy shows and movies, and staying in swanky Melbourne hotels. Finding as many “hidden” nightspots as we could. Watching burlesque performances, eating giant breakfasts at quirky cafes, and cooking together. Taking baths with obnoxiously glittery bath bombs and generally living every moment possible together.

We have a 20-year age gap, and Leo’s children are closer to Harriet’s age. Often we get stares in public because we wear “out there” clothes and hold hands. We aren’t afraid to be exactly who we are, and we bring out the best in each other. Also we love dragging other people along for the ride by telling them they’re stunning and fabulous, introducing them to new things that set their deepest desires alight, and generally letting them know that the world needs them.

We decided that our relationship was heading towards marriage and a baby from the get-go, and after attending the wedding of good friends where we saw Monty as the celebrant, we just knew he was the one and that when the time came, we should book him. So once COVID hit, we figured we should get things locked in if we wanted to get married this millennium, so we secured Holymatrimonty as our celebrant and Longview Farm as our venue before we were even officially engaged!

We knew 13th November 2021 had to be the date, so every few years, we could celebrate our anniversary on Friday the 13th, if for no other reason than to have an epic costume party! Leo believes that every girl deserves a proposal, so set about designing a ring with Harriet’s input. We talked about getting engaged one year before the wedding on Friday 13th November 2020, but then Leo started her secret squirreling!

During a romantic weekend when we were all enjoying The In-Between Times in Sydney, we had dinner in O Bar, the rotating restaurant taking in the beautiful skyline, on Friday 4th September 2020 (4+9=13!!) Leo got down on one knee, much to Harriet’s surprise and joy. In fact, the answer was “you f*Viking know I will”!!!

This was all while we were on an intense journey during which we discovered Harriet’s infertility in September 2019 and the very small window we had to make her dreams of being a parent come true. We now find ourselves parents to the most perfect little boy, Hugo. We started IVF in early 2020 and went through four rounds up to March of 2021. Another not fitting the timeline thing, but it had to happen ASAP, and the universe decided after a lot of heartaches that being eight months pregnant on our wedding day was exactly right. Perfectly imperfect or imperfectly perfect. Either way, very on-brand! The three of us will be marching together in Mardi Gras this year.

Rather than a typical honeymoon, we’re selling up to hit the road for a couple of years with Hugo and our cat Balthasar AKA Bolt (a blue Burmilla) and our dog Martin (a blue and white American Staffy). With plans to tour Australia and fly to England to see Harriet’s family and friends and some of Leo’s. We love standing up for what we believe in, amplifying the voices of the marginalized, laughing with friends, hosting noisy family gatherings with cocktails and card games, traveling with the fur babies. We are sparkly, chaotic, and happy, and we want everyone to share in our joy, for we have an abundance of it.

You’ll find Monty in our online directory of inclusive wedding vendors from around the world.