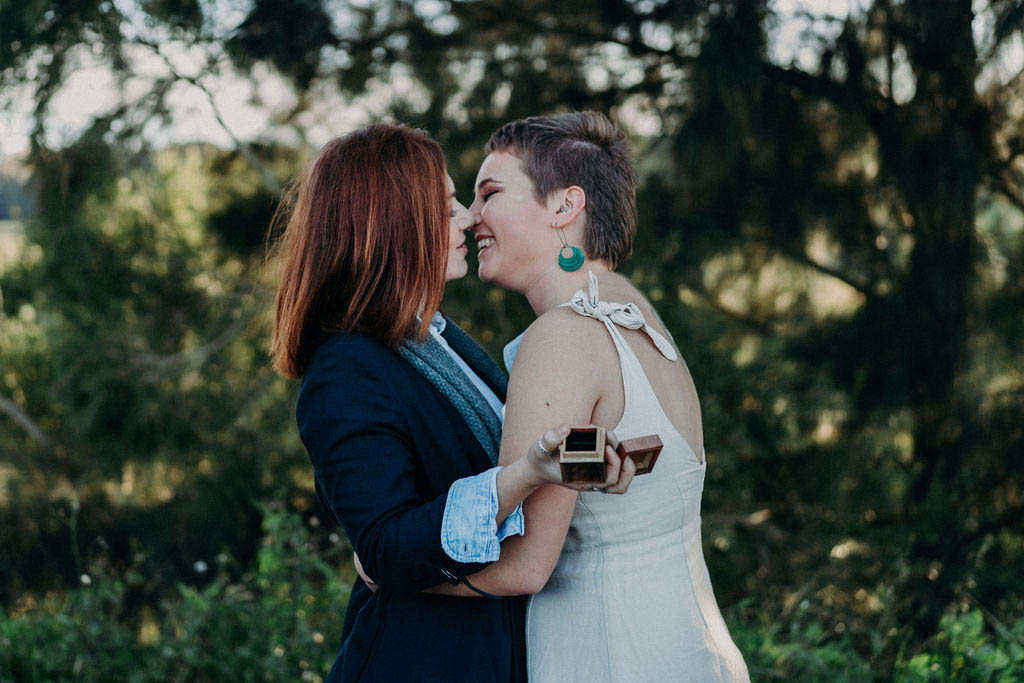 Holly’s surprise proposal photoshoot was nearly ruined when Josie took a call on Holly’s phone that accidentally revealed that she was expecting a delivery from a jeweler.

We have been together for a little more than a year and met through Josie’s sister, Gracen. Holly and Gracen worked together and Gracen mentioned that she had a sister who was single. So, Holly set to doing some Facebook searching and added Josie on Facebook.

Gracen- ultimate wingman- had told Josie of her plan, so Josie knew exactly what was going on, but both girls were too scared to speak to the other! Holly eventually messaged Josie for tips on sightseeing in Iceland as she knew Josie had previously been there. At the time, both of us were in separate countries- Josie in Japan and Holly in England.

We got along really well and decided to meet up- no strings attached and no expectations- when we were both back in Australia.

Our first date was at Guzman Y Gomez- we LOVE Mexican food. At the end of the date, Josie hugged Holly and told her how short she was, which she later found out makes Holly really mad. We got along so well and just kept getting so excited for that next date and needing to see each other again. We had our first kiss at night time in the ocean baths in Newcastle and Holly says it was amazing- Josie was so nervous she barely remembers it!

Tell us about that beautiful ring!

Josie had fallen in love with a particular vintage ring from a New Zealand store called Coco Florence. Holly secretly bought the ring, then convinced Josie that she had NOT bought the ring after she noticed it was listed as sold on the website. Then, she started planning a proposal with her old school friend Ashlee who had recently started a photography business.

In the meantime, Josie took a call on Holly’s phone from the courier company transporting the ring- she took the phone out to Holly, who could tell from the look on her face that the secret was out- the courier company had mentioned Coco Florence to Josie, who now knew Holly had a ring.

Holly will eventually have a ring, but it is currently being custom made by a mystery jeweler that she is not allowed to know about!

Tell us about planning a proposal and photoshoot all in one.

Ashlee (photographer) and Holly had planned a surprise proposal photoshoot and told Josie that it was a promotional photoshoot for Ashlee’s business to capture LGBTIQ+ inclusive content. Mid- photoshoot, Josie turned around, and Holly was on one knee with the ring! Josie shouted, “I KNEW IT,” followed by “YES!”

Has much changed since the proposal?

We are both so surprised by how little we feel has changed. We agreed that we both expected to feel a lot more nervous about being engaged- which is funny because if you’re nervous about agreeing to marry someone, then maybe that person isn’t the right fit.

Holly was a ball of nerves beforehand trying to keep a secret, hide the ring box and act calm in front of a camera, but afterward everything was perfect. We went home, ordered pizza, and drank margaritas.

We are both super excited, and we always used to talk about spending our lives together before we got engaged anyway- the only thing that has changed is that now we have rings as a symbol of that.

How is wedding planning, particularly through a global pandemic?

We are looking into venues and have a general idea of how our wedding will look but haven’t done too much planning just yet as we probably won’t be married for at least four years. What we know is that we both want the wedding to be outside in a lovely green field or park, and we will both wear dresses, but Holly will probably have an outfit change into a suit or jumpsuit for the reception. We would love a relaxed vibe where guests can mingle with whoever they like (no seating charts!) and just where everyone can have a fun night to celebrate with us.