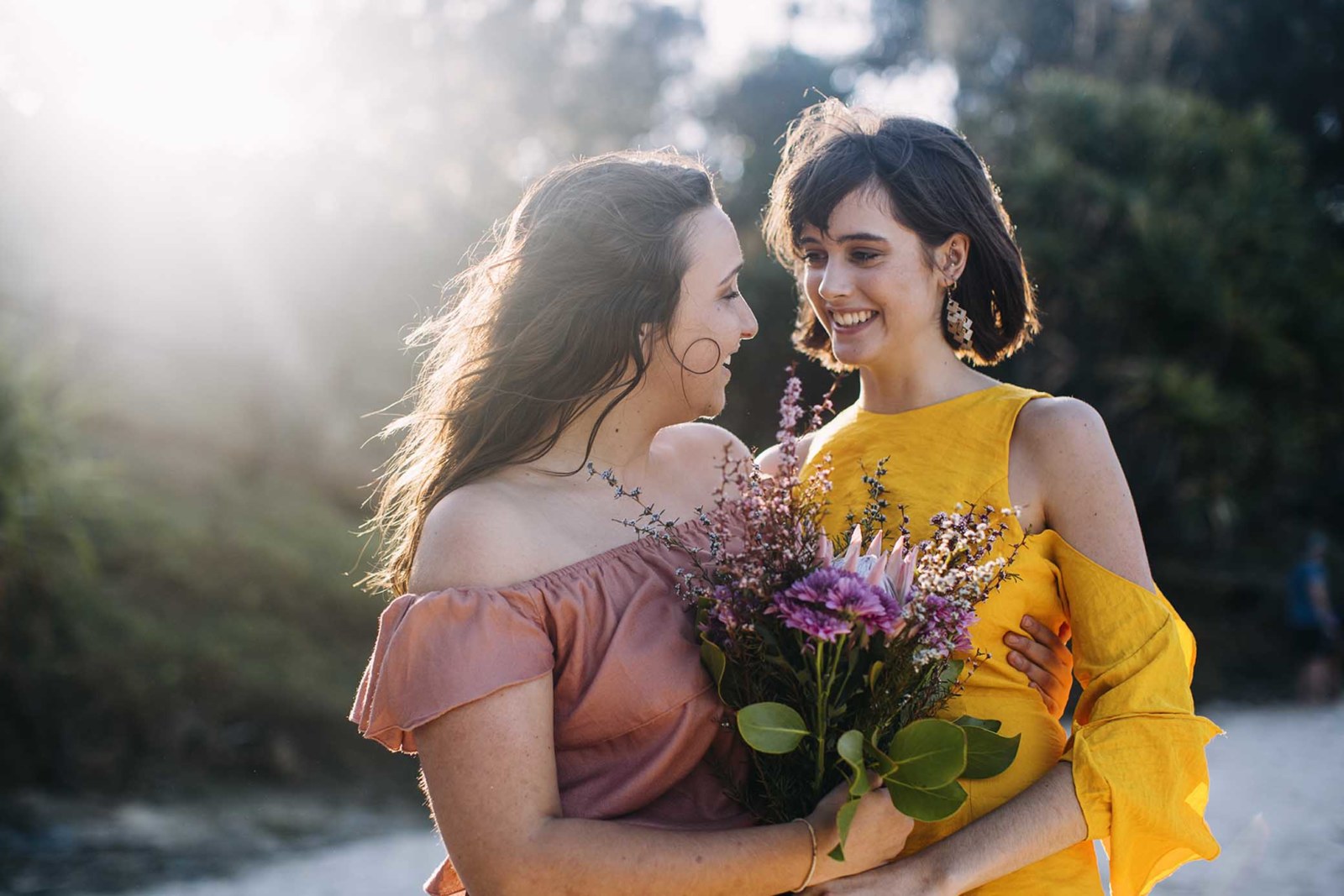 When Photographer Jess from Tuesday Photography stumbled across Jaime and Josa loved up on the beachside, she knew she had to capture what she saw.

Jaime and Josa have just shared their six-month anniversary. We spoke to them about what life has been like since they’ve found one another and how building a relationship during the height of the Marriage Equality debate in Australia has really been.

What are your favourite things about one another?

Josa: I don’t think words can describe my favourite things about Jaime. Although I have written a lot of poetry about it, which seems to encapsulate what I can’t. Since we met, one of my favourite things has been the sense of humour we share. We laugh so much that the second or so time we had sex, we almost couldn’t. I don’t know if that’s good or bad.

Jaime: I couldn’t possibly put this into a paragraph. I do agree with Jos about how much we laugh. It’s so great. Your partner should bring out the best in you, and make you want to be the best version of yourself, always. I had never felt this before. Once meeting Jos, and when we would talk about the kind of day we both had, where we want to travel, where we ideally see ourselves career-wise, where we want to be in the future, I soon realised that we both want to show each other the best side of us.

We both have this intense drive to please the other, to make sure we’re both feeling okay, and if we’re not, what we can do to improve, I love it so much. Josa’s love of writing is also a fantastic part of her. She’s so passionate and talented, and her work is so beautiful (although I’ve read things mainly about me, I’m not being biased.) Also, she does this subtle dance when she’s eating something really delicious, and it may be THE cutest thing I’ve ever seen.

What has your first six months together been like?

Josa: To be honest, we haven’t had any major downs. I think because we are always so candid with each other and won’t let anything become more than it should be. Our recent 6-month anniversary was definitely one of the most precious moments we’ve shared. As I walked into Jaime’s kitchen that morning (under the pretense of a coffee), she had set up flowers, a framed photo of us from the shoot, and a handwritten letter that made me cry in the best way possible. She was crying, too, and it was the first time we both said we love each other. I’d written something which set off tears from both of us again. That morning was slow, precious, and so delicious.

Jaime: That morning was my favourite day. I could have sat on my kitchen bench holding her for hours, taking in what we both shared. We do have an ongoing battle we have with time. We have different timetables with work, so when we do get to see each other, there’s often some sort of shift or engagement looming.

From this, we always use our time together wisely and know that it’s precious. One of my favourite moments was when I arrived back from New Zealand after going away for a trip recently. Although I was only gone for two weeks, the longing I felt for Josa in this time was indescribable. The night I came home, I was in the shower and Josa was in my room. I came into my room, and there were candles everywhere, and a piece of poetry she’d written framed sitting within all the lights. It was a moment I’ll never forget. Waking up to her the next morning, I knew I’d fallen in love with her already. But I knew there was going to be a special moment where it would be said soon.

It’s apparent that you have a very sweet relationship. How has building a relationship in such a political time in Australia been for you both?

Josa: Being with Jaime during the height of the plebiscite was increasingly frustrating and upsetting. I never thought something like this would affect me so much. But after walking past ‘no’ rallies at my university and having to deal with coworkers who were unsure whether to vote ‘yes’ or ‘no’, I realised how angry I was at Australia, the Government, and the attitudes of so many people who I share this country with.

The fact that people like that have a say in my future, and the futures of a million others, makes my blood boil. The amount of times I’ve had to leave work for a minute to stifle my tears of rage when listening to conversations about the survey is crazy. More than anything, I think the best word to describe LGBTQ+ Australians right now is ‘exhausted.’ Obviously, the survey turned a positive result. But same-sex marriage should never have been a survey in the first place.

Jaime: Speaking of the plebiscite now after it has proved the positive result is a little bittersweet. When the yes result was released, I was watching the live stream on the news. People were celebrating, kissing, crying and proposing. I started to cry as I was overcome with such joy. Knowing that we were one step closer to having the bill passed.

The program then cut to the fine print of what percentage each state voted for same-sex marriage, and to feel as though the way you want to live your life is only 60.7% valid in the eyes of your society is nothing but disheartening. Having this feeling encompass your relationship, going about your day just knowing that there’s such divide on this issue. On top of this, coming out to your family (who were all amazing) in the middle of the vote proved nothing but extremely frustrating. I’m so grateful for the way Jos and I carry ourselves together. To not shy away or act in any manner that’s not ourselves to please someone else.

A note from the Photographer:

A few years ago, my girlfriend, Jade, and I had our own no-reason couples shoot and I will forever treasure those images. They were the perfect capture of us just as we were at the time. With zero pressure to be anything other than just memories. I love that I got the chance to deliver images that serve the same purpose for Josa and Jaime.

We wandered down to a secluded beach on a Sunday afternoon a few weeks back. Inadvertently stumbling across a groom waiting for his bride to join him on the sand. We hung back during their ceremony, and I began snapping as Josa and Jaime sat entwined on the rocks as if they were the only two on that beach. I’m a firm believer in capturing portraits rather than creating them, and these two were such a dream to photograph. So comfortable together, laughing at jokes that I totally didn’t get.

Once the ceremony had finished up, and the newly-weds ventured off for their own portraits, we wandered down to the water’s edge and caught the last of the sunlight as it ducked behind the hill that surrounded us. We finished up our session and just as I was about to pack away my gear, I noticed the two of them had made their way back down to the water. The light was all but gone, but I slowly crept back towards them. Shooting the last few images of the day as the two lovebirds just held each other and looked out towards the ocean. I was eventually spotted when Josa noticed I was lurking in the background of a selfie she’d just taken.

Pam & Sarah – A Wedding with Culture

Nicola & Rebecca – A Wedding After 25 Years Together