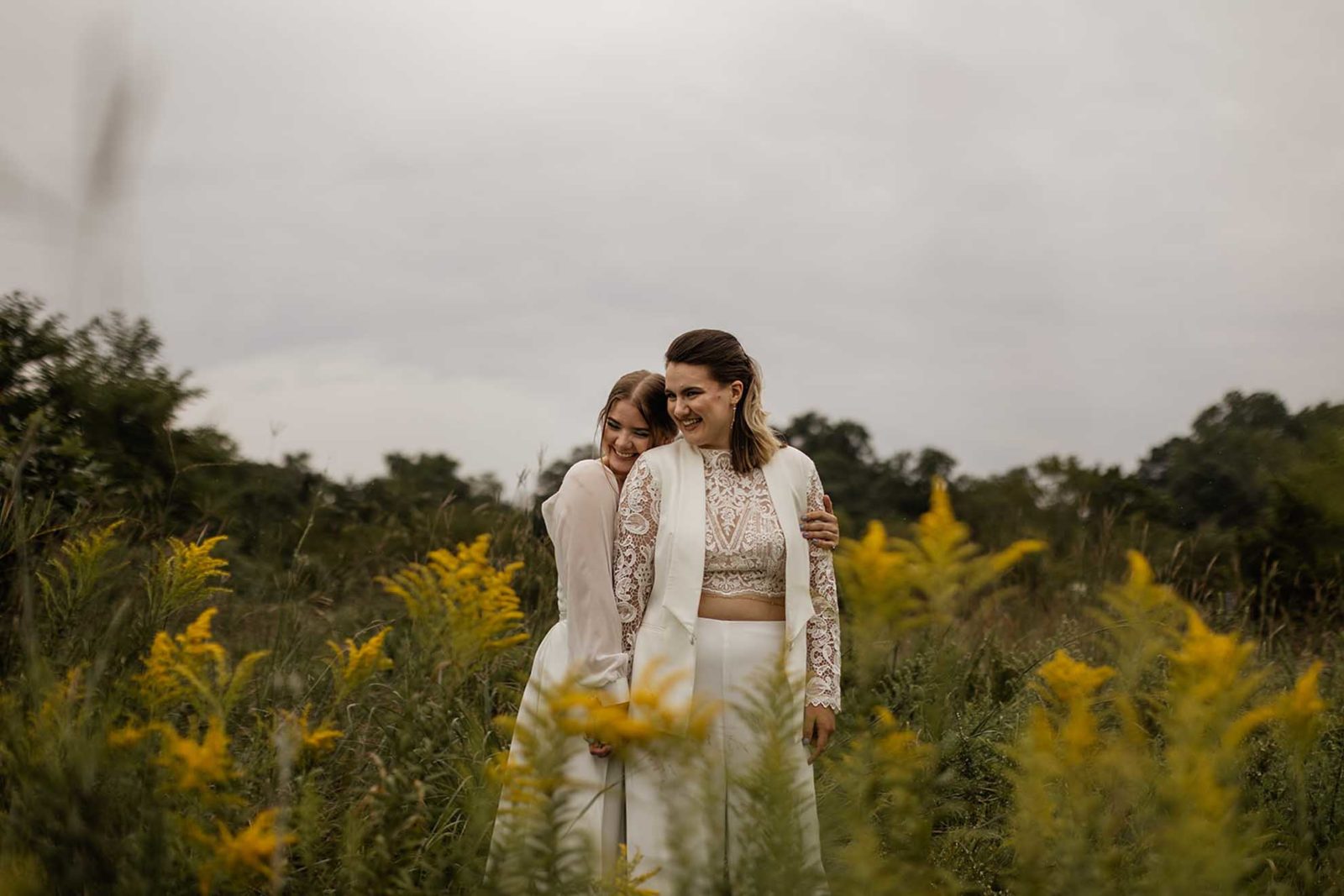 We met our last year in college in a small town in Indiana. Our mutual friends introduced us and we u-hauled that same month. We spent a couple of years in Tucson, Arizona, after graduation. Our first year there, we lived with some queer friends and adopted a house dog named Byrd. We later moved into our own house with Byrd.

Tucson has the biggest gem show globally, so we thought that would be an excellent opportunity to search for gems for our engagement rings. Our friend’s mother owns a bead shop in Tulsa, Oklahoma, called the Bead Merchant, and she attends the show each year and knew where to help us look. Jane’s father’s cousin, David Connolly, and his wife Nora also own a jewelry manufacturing business called Jabel and helped our search.

We both found Montana Sapphires of different colors and shapes that we wanted to set as engagement rings. Dave and Nora took the stones and made those dream rings a reality.

A couple of months later, as soon as we received the package in the mail, we knew the moment felt right. We took the FedEx box to the beach and sat together, sharing what this commitment would mean to us. We opened the boxes and the rings together and got down on our knees in the sand together, both proposing simultaneously. It then started to rain, and we ran into the bay with our dog dancing around. Finally, the rain cleared to a rainbow – it felt magical! We got married on that same beach in Annapolis around a year later.

A couple of months after getting engaged, we moved back to the East Coast to be closer to both of our families before the wedding. The wedding industry and planning process felt distant to us.

Your website and magazine was one of the few places we saw queer couples represented. We spent one whole day printing out inspiration for a pinboard from the weddings you shared!

Barbara O, our photographer, was the first vendor we booked, and she was such an incredible help in the planning process, and we quickly became friends.

We had lots of friends from college that we wanted to invite to the wedding and Jane is originally from Massachusetts, while Meredith grew up moving every couple of years in her childhood, having lived in a total of 8 countries. Needless to say, there were lots of people we wanted to invite.

In the end, it was most important to us to have friends and family who we cared about around us and to have a fun PARTY! We had a huge softball game with beer the day before the wedding.

It turned out to be the best weekend ever.

We bought a house in a Co-op community, Meredith started a new job, Jane started classes for nursing school, AND we got married all in the same month. Now we are settling into our new routine and loving the calm!