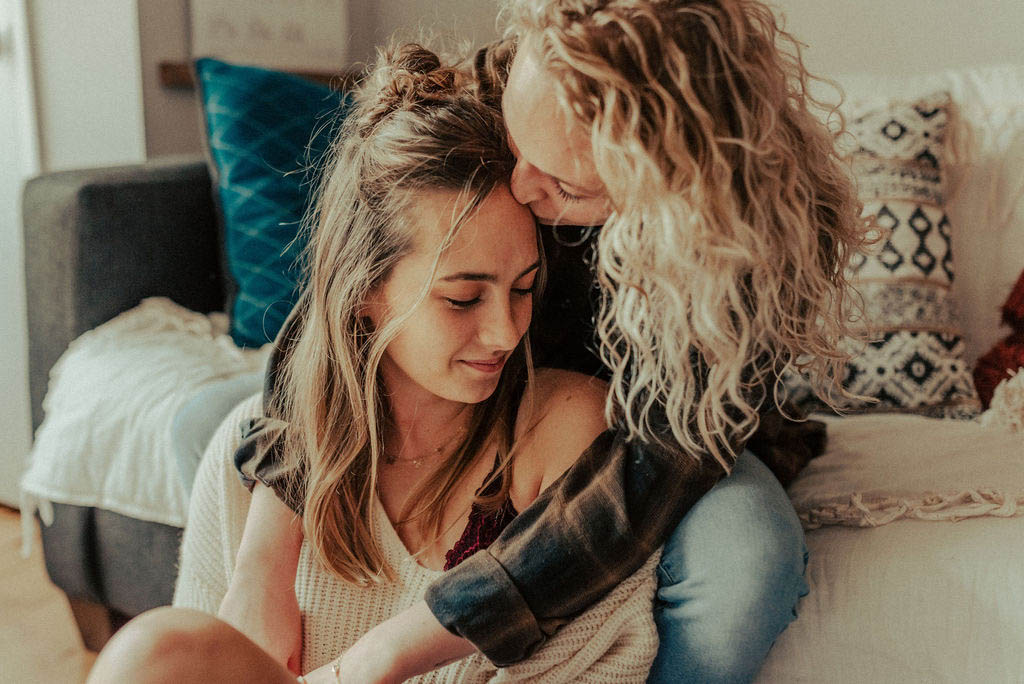 Jayme had a secret crush on Mal for a while before the pandemic meant they’d live in the same city and a romance would blossom.

A secret crush turned into a pandemic love story. Tell us the details!

J: My best friend, Erin, from college, was coming to visit me at my old home in Boston. She asked if she could bring her friend Mal with – turns out Erin and Mal were coworkers and had also become best friends – yes, my best friend is also Mal’s best friend! Erin brought Mal with her to Boston, and we spent the weekend at the beach, did a brewery tour, and went to a DJ boat concert cruise along with some other friends and…my girlfriend at the time.

Mal and I were both in relationships when we met, so we were just friends. Although I’d be lying if I did not mention that the first time I saw her, I asked Erin if she was into girls because I was secretly very attracted to her (this stayed a secret crush for a long time).

We were just friends for about a year!

During that time, we both went through rough break-ups, and we hung out a few times when I would visit home in NY and Erin would bring Mal around…. including spending Christmas Eve at Mal’s parent’s house.

Yeah, I met the parents before we were even a thing!

As time went by, Covid happened, and my job in Boston went fully remote, so I decided to move back to NY and live with my family for the time being.

During the beginning of Covid, we created a small friend group to all hang out together and get through the tough times. We spent the summer camping at my cabin in the ADK. I spent most of the summer flirting with Mal and getting denied. Mostly because she didn’t think I was serious.

Until one day at camp, things started to change.

We both felt the connection morphing into much more than just a friendship.

Especially when she sang a song in my car.

I was driving, and I just about fainted when I heard her sing.

I said to her, “holy sh** you can sing,” and she gave me that look (you all know the one I’m talking about), and it was game over. The song she sang was “Slow” by Matoma & Noah Cryus. It’s ironic now because the first time we met in Boston and went on the boat cruise, it was Matoma DJ’ing on the boat!

It really took a turn when Mal texted me the next day and finally began to flirt back. We started talking and hanging out more one on one without any of our friends around – and the rest is history!

Has growing a relationship through the global pandemic been challenging?

J: Getting through these weird times with everything going on in the world has been challenging. That and finding time to see each other. Mal is a full-time college student and works two jobs, and I work full time for a big tech company, so sometimes it can be hard to coordinate schedules and make time to see each other.

And what’s your favorite thing about one another?

M: Jayme’s work ethic and your passion for what you love to do.

J: How she can put me in my place but is also one of the kindest generous people I have ever met. She’s a lowkey baddie!

Also, when she sings and dances, I about die inside.

A note from the photographer, Jessica of Jovial Photography

I am a bisexual photographer in northern NY, raising two young girls. We live in a primarily conservative area where there is an extreme lack of diversity in day-to-day life, as well as in the artwork by local creatives. As a parent, I’ve always strived to provide a safe environment for my girls, so they are free to grow up and love who they choose. I constantly show them images of same-sex couples, I talk about their future “boyfriends or girlfriends” and applaud beautiful same-sex relationships that we see on tv and in the media. My girls are so used to it, that loving a girl is as normal to them as loving a boy. I have recently come to the realization that while I was doing a great job teaching them about tolerance, I was missing out on an opportunity to do this for others in my area who either view same-sex relationships as unnatural or wrong, or for those who are still not out, for fear of ridicule or judgment.

We have a unique platform as creatives, as our jobs allow us to raise awareness and promote tolerance without harsh opinions. We have a tangible way to put real people and faces to stories which can flip the script from “them” to “us”. People relate to images more than a social media status telling them they are wrong. We have the ability to go above and beyond for the LGBTQ+ community, by showing them that our businesses are a safe space, and showing our friends, family and clients how beautiful, natural and normal a same-sex relationship is – or any relationship outside of the norm for that matter. If our feeds and portfolios aren’t showing diversity, how will they know that they are welcome in our business or even in our area?

I needed to do better for the LGBTQ+ community. Since the opportunities to shoot same-sex couples are few and far between where I live, I called up my friends Jayme and Mal, who are very much in love, and asked them if I could shoot their love story. We kept it super simple and decided on an in-home session at my apartment. I wanted to make sure that those who saw these photos would see the love before they saw the gender. I have had an overwhelmingly positive response to these photos, which gives me so much hope. And, I am proud to have a job where I can visually show people that love is love.

Dan & Lauren – A Proposal at a Lantern Festival in Pennsylvania