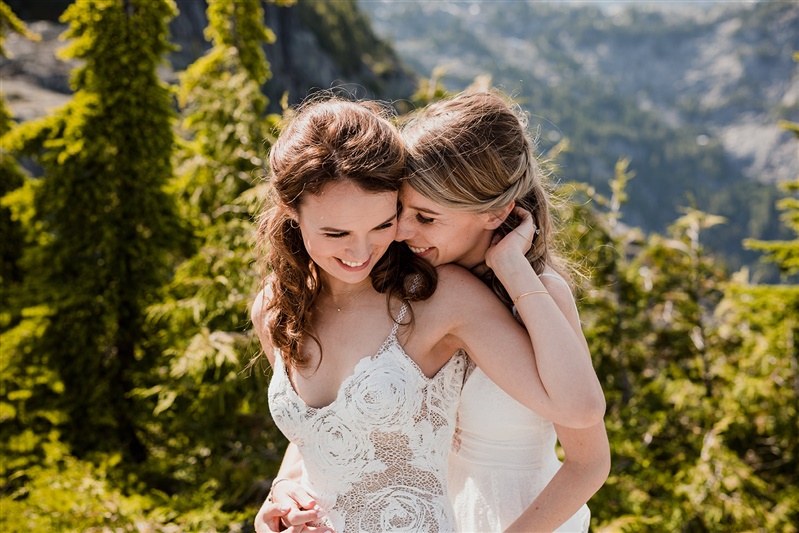 With a handful of family and friends, Jess and Steph became wife and wife on top of a beautiful Canadian mountaintop.

Tell us a little about yourselves.

Jess is from Brisbane, and Steph is from Adelaide. We both work in film and TV and have lived in Vancouver, Canada, for the past three years. We both like to cook, look after our plants, spend time at the beach in summer, and snowboard in winter.

We have been together for five years and met at work in Sydney. Steph had just graduated and started work at the film school she was studying at. Jess had recently moved from London and began working at the school around the same time, and we quickly became close friends.

Only about a month after we met, Steph asked Jess if she would like to move into the house she was living in with some friends. Living together as friends and housemates first meant that we spent lots of time just hanging out and having fun. We would meet with our group of friends at Shark Bar in Sydney almost every night after work. Then we would get the train home and have late-night chats on the balcony. About six months later, we finally admitted to having huge crushes on each other and got together.

Jess asked Steph to marry her during a trip to New York City with family for Christmas.

J: We were walking through Central Park, and I was casually trying to walk us in the direction of a spot called Wagner Cove. I picked it out because it was meant to be a scenic and quiet area of the park. When we got there, there were three people already there taking photos of the lake. I had to keep finding reasons to tell Steph why we should hang around while I was waiting for the other people to leave. As soon as they did, I took the chance and asked her!

S: About nine months later, I proposed back to Jess in our apartment in Vancouver, and we had a picnic at the beach.

Talk us through the decision to elope.

We originally planned to have a big wedding. Our friends and family are spread around Australia, Canada, England, Sweden, and the States. We realized that the logistics of trying to gather everyone in one location would be pretty tricky. When COVID19 hit, we knew that having a big celebration soon would no longer be possible, so our families were supportive of us doing something small near our home in Vancouver instead.

We researched companies that organize small weddings and found a helicopter package with Young, Hip, and Married. They helped organize an amazing day where we flew up to Widgeon Mountain Range and got married there with a few close friends. We are still planning on having a bigger celebration with our families at a later date.

Talk us through the actual elopement.

We got ready in our apartment with a hair and makeup artist and our three friends that came with us. We then drove to a helicopter airport in Vancouver and met with our officiant, photographer, and pilots. After signing the paperwork, we got in the helicopters and went for a 30-minute flight, landing at the top of Widgeon Mountain Range. Our ceremony was short and sweet, and we spent the rest of the time making the most of the beautiful location and taking photos.

What does the future hold for you both?

We moved from Vancouver to Brisbane just last month, so we are both still adjusting to life in a new place. We will be staying here for the next little while to be closer to family and to focus on the productions we will be working on over the next year.

One day, we would love to produce a television series featuring queer characters. Positive queer representation on screen is important to both of us, and we would love to help bring more stories to life.